The bomber, who authorities say is an Islamic State member recently arrived from Syria, blew himself up on Tuesday in Sultanahmet square near the Blue Mosque and Hagia Sophia. 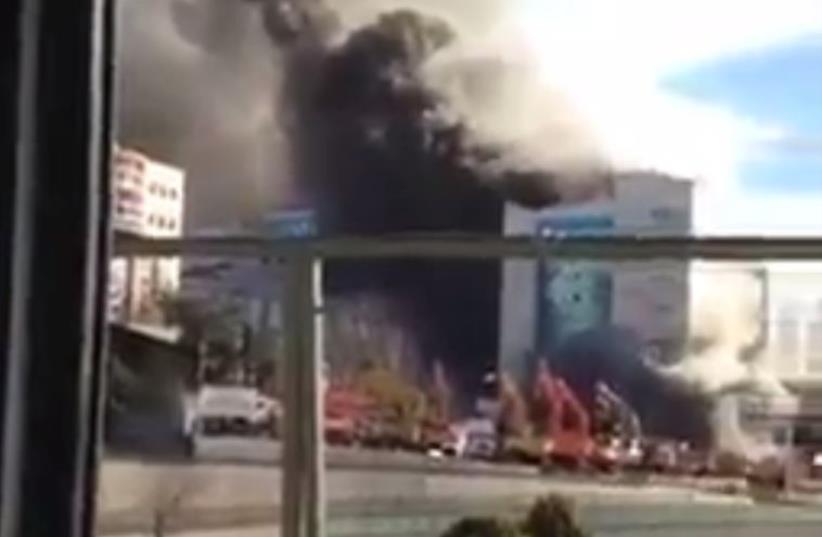 Explosion rocks Istanbul's Sultanahmet Square
(photo credit: screenshot)
Advertisement
A Islamic State suicide bomber who killed 10 German tourists in Istanbul entered Turkey as a refugee and his movements were not monitored as he was not on any watch lists, Turkish Prime Minister Ahmet Davutoglu said on Wednesday.Asked whether Turkey planned air strikes against Islamic State in response to the bombing, Davutoglu said Turkey would act at a time and in a manner that it saw fit.He said Russia's entry into the Syrian civil war had become a barrier to Turkish air strikes against Islamic State, and that the Russian air force appeared to be protecting the radical Sunni militants.The bomber, who authorities say is an Islamic State member recently arrived from Syria, blew himself up on Tuesday in Sultanahmet square near the Blue Mosque and Hagia Sophia, major tourist sites in one of the world's most visited cities.Asked about a report in the Turkish media that the bomber had registered at an immigration office in Istanbul a week ago, Interior Minister Efkan Ala confirmed that the man's fingerprints were on record with the Turkish authorities."Your assessment that his fingerprints were taken and there is a record of him is correct. But he was not on the wanted individuals list. And neither is he on the target individuals list sent to us by other countries," Ala told a joint news conference with his German counterpart Thomas de Maiziere.The Haberturk newspaper published what it said was a CCTV image of the bomber, named in some local media as Saudi-born Nabil Fadli, at an Istanbul immigration office on Jan. 5.It said he was identified by a sample of a finger taken from the blast site.Deputy Prime Minister Numan Kurtulmus said on Tuesday the bomber had been identified from body parts at the scene. He was born in 1988 and was thought to have been living in Syria, from where he was believed to have recently entered Turkey.Ten Germans were killed in the bombing, a spokeswoman for the German foreign ministry said, raising the death toll among Germans from 9 previously. Five more are in intensive care.Turkey, which like Germany is a member of the U.S.-led coalition against Islamic State in Syria and Iraq, has become a target for the radical Sunni militants.It was hit by two major bombings last year blamed on the group, in the largely Kurdish town of Suruc near the Syrian border and in the capital Ankara, the latter killing more than 100 people at a pro-Kurdish rally in the worst attack of its kind on Turkish soil.The Istanbul attack, targeting groups of tourists as they wandered around the square, appeared to mark a change in Islamic State's tactics against Turkey."This incident is a bit different. In previous attacks, it was Turks who crossed into Syria to fight Kurds and then crossed back to attack Kurdish targets," said Aaron Stein, senior fellow at Atlantic Council's Rafik Hariri Center for the Middle East."It's different in terms of intentions and in terms of its targets," he told Reuters.GERMANS NOT DELIBERATE TARGETForeign tourists and Turks paid their respects at the site early on Wednesday. Scarves with the Bayern Munich football club emblem were left along with carnations and roses at the scene, before Turkish police sealed off the area.De Maiziere said there were no indications Germans had been deliberately targeted and that he saw no reason for people to change travel plans to Turkey. He said Germany stood resolutely by Turkey's side in the fight against terrorism."If the terrorists aimed to disturb, destroy or jeopardize cooperation between partners, they achieved the opposite. Germany and Turkey are becoming even closer," he said, adding there was no link to Germany's contribution to the fight against terrorism.The guide of the German group was quoted by Turkey's Hurriyet newspaper as saying she had yelled "run" after seeing the bomber, who was standing among the tourists, pull a pin on his explosives, enabling some of them to get away.Witnesses said the square was not packed at the time of the explosion, but that several groups of tourists were there."I didn't finish the tour, you know, the tour I had bought. I suppose there is something remaining of the ticket," said Jostein Nielsen, a wounded Norwegian tourist, as he waited on a stretcher at Istanbul airport, his left leg bandaged."I still have to go to the Blue Mosque and the old Turkish Bazaar, so I have to use that ticket ... We have no hard feelings towards Turkey. We know there are some mad people out there," he said.RUSSIAN DETENTIONSAla said nine other Germans were wounded in the blast, along with the Norwegian and one Peruvian. He vowed to work closely with Germany in investigating the attack.One person was detained late on Tuesday as part of the investigation, Ala said, but gave no details. He defended Turkey's record in fighting Islamic State, saying 200 suspects had been detained just a week before the blast.Turkey has rounded up hundreds of suspected Islamic State members since launching what it called a "synchronized war on terror" last July, raids which continued on Wednesday.Since the attack, police have detained a total of 65 people including 16 foreign nationals in six Turkish cities, the Dogan news agency reported.The Russian foreign ministry confirmed three of those detained were Russian nationals, but it was not immediately clear whether there was any connection to the Istanbul attack, for which there has been no claim of responsibility.Ala said Turkey had detained 3,318 people for suspected links to Islamic State and other radical groups since Syria's conflict began. Of that number, 847 were subsequently arrested, most of them foreigners.