Activist complains of Russia’s military intervention on behalf of Assad regime and its Shi’ite allies Iran and Hezbollah. 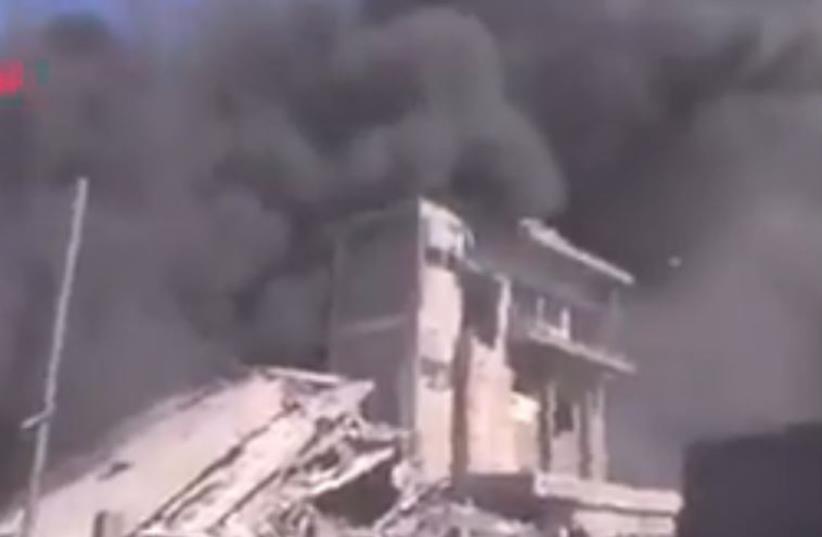 Screenshot of footage circulated on Arab social media purporting to show the aftermath of Russian airstrikes in Syria
(photo credit: ARAB MEDIA)
Advertisement
A Syrian opposition activist based in Jordan told The Jerusalem Post that the rebels want Israel to increase attacks against President Bashar Assad’s forces and those of his Shi’ite allies.Naser Abu-Magd told the Post on Monday night – in an ongoing email exchange dating back to late last year – that the Syrian opposition welcomes Israeli strikes against Assad’s regime or Hezbollah.However, he argues that Russia and the Shi’ite axis want to change the rules of the game and disrupt Israeli action in the country.Magd also complained about Russia’s military intervention on behalf of the Syrian regime and its Shi’ite allies Iran and Hezbollah.However, Magd predicts that, ultimately, Russia’s war will fail and the rebels will topple the Assad regime.The opposition activist also claimed that Assad lied to Russian President Vladimir Putin about the Western-backed Free Syrian Army’s strength, which supposedly upset him.Magd also peddled a conspiracy theory common among some Sunni Arabs in the region, that Iran is supporting Islamic State.Mendi Safadi – an Israeli Druse who served as Deputy Regional Cooperation Minister Ayoub Kara’s chief of staff, and who has met with Syrian opposition activists – told the Post on Tuesday that “Israel would not be wise to go to war against Syria.“The only loser of this would be the Syrian opposition, even more than Israel,” he said.An Israeli attack would complicate the Syrian war and taint the Syrian opposition, as many believe it is backed by Israel.It is no secret that Israel’s reported military interventions in Syria against Assad’s regime, Hezbollah and Iranian forces aid the opposition; but that does not mean the world would not react if Israel would decide to launch a war in Syria, said Safadi.“When you look at the strategic landscape, it is clear that limited Israeli attacks serve Israel and the Syrian rebels, but opening a full-scale war would destroy all of our achievements and help Assad’s regime,” he said.