Jarba, in a speech to an international conference kicking off Syria peace talks, said Syrian President Bashar Assad was responsible for crimes against humanity in the war-torn country."The pictures of torture are unprecedented except in the Nazi camps during the Second World War," he told the talks in the Swiss resort of Montreux.Syrian officials could face war crimes charges after a military police photographer defected and provided evidence showing the systematic killing of 11,000 detainees, the Guardian newspaper reported on Monday, citing three lawyers who had examined the files.

Syria on Wednesday rejected the report calling it an attempt to undermine peace efforts as diplomats gathered in Switzerland for talks.

The 31-page report released on Monday contains 55,000 images of emaciated and mutilated corpses. Bearing signs of torture, some of the corpses had no eyes. Others showed signs of strangulation or electrocution.The images were supplied by a Syrian military defector who had worked as a military police photographer for 13 years. His identity has not been released to the media.Former war crimes prosecutors who authored the report said Syrian officials could face war crimes charges as a result of the evidence, which they said evoked images of Nazi death camps. 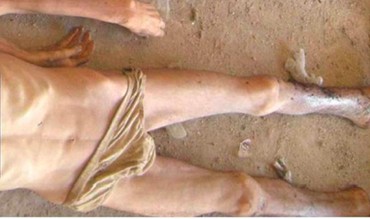 But Syria's Ministry of Justice said the report was "politicized" and "lacking objectivity and professionalism".

"Releasing the report one day before the 'Geneva 2' conference provides categorical evidence that its goal ... is to undermine efforts aimed at achieving peace in Syria," the ministry said in a statement carried on Syrian state television. The broadcast went out while Jarba was speaking at the opening day of the Swiss peace conference.At one point, Jarba made reference to the report and held up a photograph of an alleged torture victim.Reuters has read the report but it was not possible to determine the authenticity of the images or to contact the photographer.