Fighting has slowed considerably since a fragile "cessation of hostilities agreement" brokered by the United States and Russia came into force almost two weeks ago. 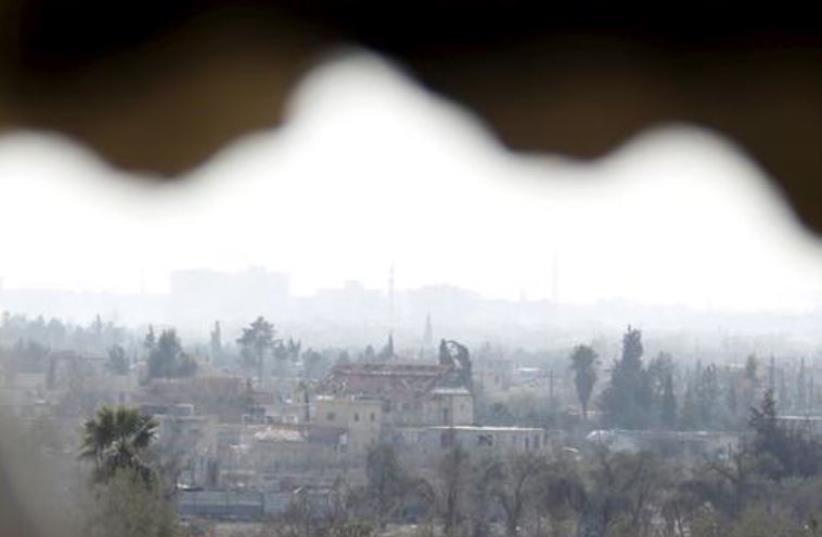 A general view shows the besieged city of Douma from Wafideen Camp, which is controlled by Syrian government forces, in Damascus suburbs, Syria February 13, 2016.
(photo credit: REUTERS)
Advertisement
BEIRUT - The head of the Syrian opposition's negotiating team said on Thursday it was not optimistic about peace talks getting under way in Geneva, and has still not confirmed if it will attend the UN-backed negotiations.Asaad al-Zoubi, head of the main opposition council's delegation to the talks, told Al Arabiya al Hadath TV the humanitarian situation and continuing military operations carried out by the Syrian government and its Russian allies gave little cause for optimism."There is no optimism ... there is an international conspiracy and a cover-up of Russian massacres and a cover-up for (president) Bashar," said Zoubi, who is chief negotiator for the High Negotiations Committee (HNC).Fighting has slowed considerably since a fragile "cessation of hostilities agreement" brokered by the United States and Russia came into force almost two weeks ago.But the truce does not cover Islamic State or the al Qaida-linked Nusra Front, whose fighters are deployed in western Syria, close to rebel groups that have agreed to cease fire, and there have been accusations of violations on all sides.The HNC had in recent days expressed a degree of optimism about the peace process, saying the agenda proposed by the United Nations was positive and noting a reduction in government violations of the truce.But Zoubi said there were still serious concerns about the actions of the Syrian government and its Russian allies, and cited fighting in a Damascus suburb on Thursday as an example.The Britain-based Syrian Observatory for Human Rights, which monitors the civil war, said there had been air strikes, shells fired by government forces and clashes between Syrian and rebel forces in the eastern Ghouta suburb on Thursday.The HNC said on Thursday it had recorded 24 violations of the truce by the Syrian government and its allies on March 9 and 10. Russia also said it had registered violations, saying on Thursday it has noted eight in the past 24 hours.The Geneva talks will coincide with the fifth anniversary of a conflict that began with protests against President Bashar Assad before descending into a multi-sided war that has drawn in foreign governments and allowed the growth of Islamic State.