Syrian opposition to Obama: Stop Putin from killing our children

"I believe he can really stop these attacks by the Russians on Syrians. If he is willing to save our children it is really the time now to say 'no' to these strikes in Syria" spokesman says. 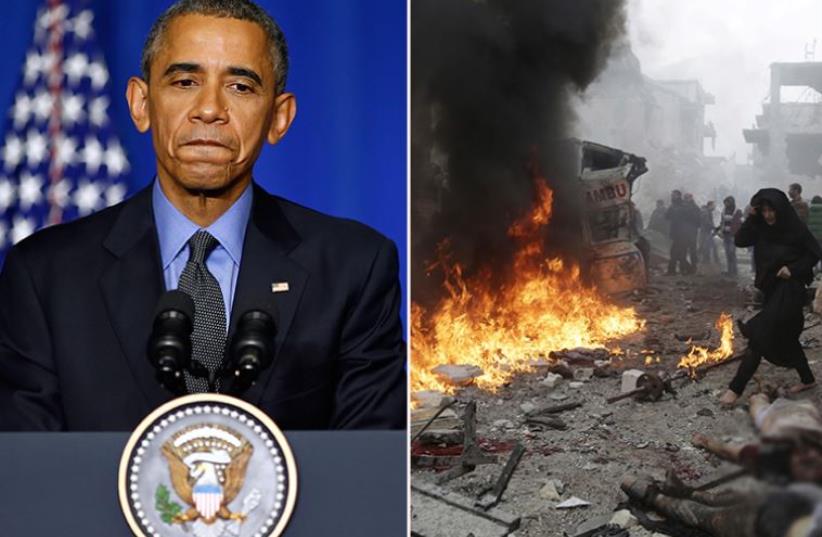 Barack Obama
(photo credit: REUTERS)
Advertisement
The Saudi-backed opponents of Syrian President Bashar Assad on Wednesday called on the United States to act more forcefully to stop Russia's bombing of their positions.Asked if the opposition would attend peace talks this month, spokesman Salim al-Muslat told Reuters: "Yes we will go. And we were there to really make it a success but we do not have a serious partner."If they stop killing civilians then I believe there will be a solution there," he said."We will go to peace talks. We don't have any preconditions, we only ask for implementation of the Security Council resolution."We will do anything to help our people and stop the suffering," he said.Asked what he would like US President Barack Obama to do, Muslat said: "I believe he can really stop these attacks by the Russians on Syrians. If he is willing to save our children it is really the time now to say 'no' to these strikes in Syria."I believe he can do it but it is really strange for us that we don't hear this from him," he added."Somebody has to stop Putin and stop the dictator in Damascus. I don't think Russia is really strong enough but because of some weakness on the other side it makes Putin move like that," he added."In political decisions there is some weakness there in Washington," he said."The Syrian regime, Russia and Iran don't see anyone who says 'no' to them and that is why they commit more massacres in Syria."The Russian-backed Syrian government advance over recent days has shifted the balance of the war and helped to torpedo the first peace talks for two years, which collapsed in Geneva last week before they had begun in earnest.The Syrian opposition will also attend talks in Germany on Thursday where major powers are meeting in an attempt to revive Syria peace efforts, Muslat said. French Foreign Minister Laurent Fabius also questioned the commitment of the United States to resolving the war."There are the ambiguities including among the actors of the coalition ... I'm not going to repeat what I've said before about the main pilot of the coalition," Fabius said. "But we don't have the feeling that there is a very strong commitment that is there."