Since Russia joined the war on behalf of Bashar Assad's government three years ago, Damascus has recaptured all of Syria's major cities from anti-Assad rebels. 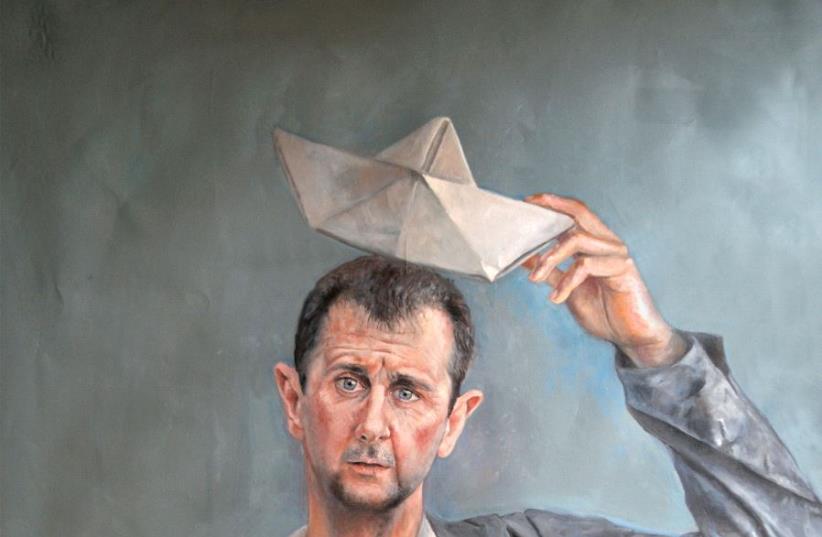 Syrian President Bashar Assad depicted as a refugee
(photo credit: ABDALLA AL OMARI)
Advertisement
RIYADH/AMMAN - Syria's main opposition stuck by its demand on Thursday that President Bashar al-Assad play no role in an interim period under any U.N.-sponsored peace deal, despite speculation it could soften its stance because of Assad's battlefield strength.

A gathering in Saudi Arabia of more than 140 participants from a broad spectrum of Syria's mainstream opposition also blasted Iran's military presence in Syria and called on Shi'ite militias backed by Tehran to leave the country.

"The participants stressed that this (the transition) cannot happen without the departure of Bashar al Assad and his clique at the start of the interim period," opposition groups said in a communique at the end of the meeting.

The opposition groups met to seek a unified position ahead of U.N.-backed peace talks after two years of Russian military intervention that has helped Assad's government recapture all of Syria's main cities.

"The Syrian opposition has sent a message that it is ready to enter serious direct talks over a political transition in Syria and has a unified position and a vision for the future of Syria," Ahmad Ramadan, opposition spokesman, told Reuters.

U.N. peace talks mediator Staffan de Mistura, preparing for a new round of Geneva talks, will visit Moscow on Friday, where he is expected to discuss the situation in Syria.

There had been speculation that the opposition, at the meeting, could soften its demands that Kremlin ally Assad leave power before any transition.

Riyad Hijab, an opposition hardliner who led the High Negotiations Committee that represented the opposition at previous rounds of negotiations, abruptly quit this week.

NO MILITARY PATH TO VICTORY

For many years, Western and Arab countries backed the opposition demand that Assad leave office. However, since Russia joined the war on behalf of Assad's government it has become increasingly clear that Assad's opponents have no path to victory on the battlefield.

Russian President Vladimir Putin has called for a congress of the Syrian government and opposition to draw up a framework for the future structure of the Syrian state, adopt a new constitution and hold elections under UN supervision.

But he has also said that any political settlement in Syria would be finalized within the Geneva peace talks process overseen by the United Nations.

The opposition has long been suspicious of the parallel diplomatic track pushed by Russia, which before the proposed Sochi congress included talks in Kazakhstan, and has insisted that political dialog should only take place in Geneva.

The opposition communique said the participants supported a U.N. based process that would allow Syria to undergo "a radical political transition" from an "authoritarian system" to a democracy where free elections would be upheld.

Negotiations should be direct and without preconditions based on past U.N. Security Council resolutions, it said.

The opposition backed the restructuring of the army and security organs and preservation of state institutions, but called for the trial of those responsible for war crimes.

The meeting, which included independents and Free Syrian Army military factions, also blamed the Syrian government for the lack of progress in Geneva-based talks held in the past.

"The political process has not achieved its goal because of the regime's violations," the communique said, citing the bombing of civilian areas, the siege of rebel held areas and the detention of tens of thousands of dissidents.

Syria's civil war, now in its seventh year, has killed hundreds of thousands of people and created the world's worst refugee crisis, driving more than 11 million people from their homes.