Syrians have poured across their borders since anti-government protests in 2011 spiraled into a full-blown conflict between rebels, Islamist militants, government troops and foreign backers. 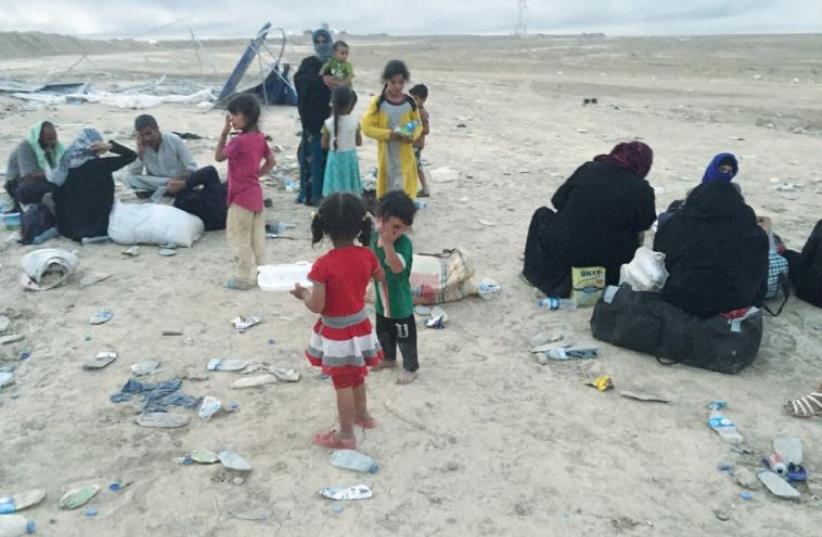 REFUGEES FLEEING from ISIS are seen resting after arriving in Makhmur, Iraq.
(photo credit: SETH J. FRANTZMAN)
Advertisement
GENEVA - The number of people fleeing Syria's civil war to Turkey, Lebanon, Jordan, Iraq and Egypt has passed the 5 million mark, data from the UN refugee agency showed on Thursday.Syrians have poured across their borders since anti-government protests in 2011 spiraled into a full-blown conflict between rebels, Islamist militants, government troops and foreign backers.An initial rush of refugees in 2013 and 2014 steadied for the next two years. But the numbers have risen again this year after the military victory by the government and its Russian allies in the northern city of Aleppo.A total of 5,018,168 people have now taken refuge in Syria's neighbors and other countries in the region, according to data collected by UNHCR and the government of Turkey.Millions more have fled to other parts of the country, including tens of thousands this month, mainly women and children, trying to get away from a rebel offensive northwest of the city of Hama.Syrians have also fled to Europe in large numbers, making 884,461 asylum claims between April 2011 and October 2016. Almost two-thirds of the claims were in Germany or Sweden.Hundreds of thousands more live in Gulf countries that are not party to the 1951 Refugee Convention, such as Saudi Arabia, Qatar and the United Arab Emirates, so they are not recorded as refugees.A U.N.-led humanitarian appeal to help Syrian refugees and support host communities has received only 6 percent of the money needed this year - $298 million out of $4.6 billion.