Gruesome images of Syrian aggression capture an extremely violent conflict that has already claimed so many lives.

By REUTERS
MAY 14, 2013 22:41
firefight in syria 370
(photo credit: REUTERS)
Advertisement
BEIRUT - Syrian soldiers slowly stab a man to death, puncturing his back dozens of times. A rebel commander bites an organ ripped out of an enemy combatant. A young boy hacks the head off a prisoner. A soldier mutilates the genitals of a corpse.These are the images of Syrian conflict, the first war in which the prevalence of camera phones and Internet access has allowed hundreds of gruesome war crimes to be broadcast, spreading hatred and fear. They are defining the war that is spilling across Syria's borders and making reconciliation an ever more distant prospect.Brutality has been used as a tool since the revolt began two years ago, when videos emerged of government soldiers torturing pro-democracy protesters. In response to the crackdown, the opposition took up arms and now fighters from both sides are filming themselves committing atrocities.Ghoulish footage of violence is not filmed surreptitiously, but with pride by the assailants who often speak to camera.Rebel commander Abu Sakkar, known to journalists and revered by many rebels, was shown in a video on Sunday cutting organs out of a dead soldier, addressing the camera as he ripped the flesh: "I swear to God we will eat your hearts and your livers," he warned President Bashar Assad's forces as his men cheered.Sakkar was a founding member of the Farouq Brigade, one of the main rebel units in Syria, but has since formed his own battalion as the opposition fragments. In the mosaic of hundreds of opposition groups, Sakkar's men are seen as neither secular nor hardline Islamists, but as some of the hardiest fighters.Another picture posted online shows a rebel holding the severed head of a man, supposedly an Assad loyalist, over a barbecue as if to cook it. The fighter smiles and poses confidently, gripping a tuft of hair. 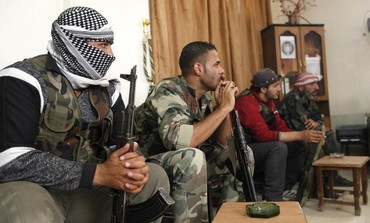 \
Hardened Free Syrian Army fighters receive instruction from their commanders.ZERO SUM GAMEReinoud Leenders, an associate professor in the war studies department of King's College London, says that these brutal displays are used as a tool of war by both sides."It's the ultimate expression of disrespect and dehumanizing your opponent," he said.In the face of an insurgency, he says, Assad's forces have used mass killings and torture to root out rebel fighters hiding among civilians."The regime has difficulty in pinning down opposition members, so they scare civilians from the area to get the rebels exposed. It looks irrational and emotional but there are rational reasons," he said. 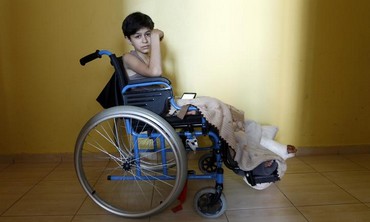 Mohammed, a boy injured during the Syrian conflict.Nadim Houry, a Syria and Lebanon researcher for Human Rights Watch, has documented abuses since the start of the revolt and says that he is seeing more and more brutal acts."Both parties are acting like they are facing an existential threat," he said. The opposition and the government see the war as a zero sum game, both fighting for survival, he says.This fear of defeat silences condemnation from supporters of both sides, he says. The main Syrian opposition group condemned the video of a rebel commander taking a bite from the dead soldier but many opposition supporters dismissed the brutality.On some opposition Facebook pages people celebrated the act. Others berated the media for highlighting one particular event, saying they should focus on indiscriminate killing of men, women and children by Assad's war planes and militia. 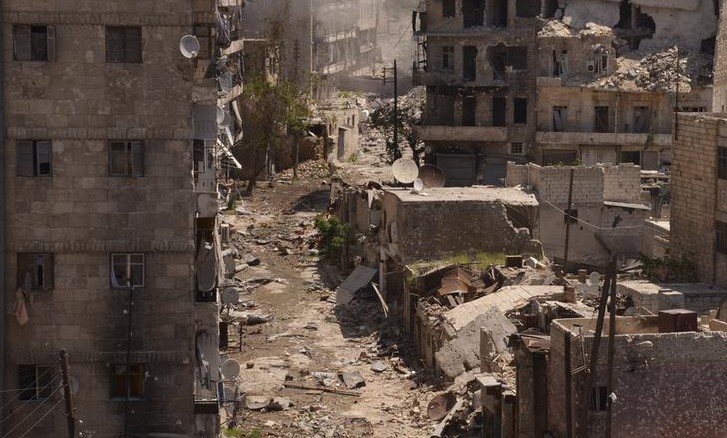 A scene of destruction in Syria's war.The Syrian government has never acknowledged brutality in army ranks, instead referring to people killed by soldiers as "terrorists" and areas captured by its forces as "cleansed".Syria's war started as a popular uprising against the Assad dynasty, which has ruled for over four decades using secret police, intimidation and brute force.But majority Sunni Muslims lead the revolt, while Assad gets his core support from his Alawite sect, an offshoot of Shi'ite Islam, leading to sectarian fighting and hatred.International powers have taken sides, with the West and Gulf countries supporting the opposition, while Iran and Russia back Assad. While war crimes are condemned in words, there has been no real deterrent for the perpetrators, which Houry said has allowed atrocities to continue."What is particularly troubling is the silence of the international powers," Houry said. He referred to a recent army and loyalist militia attack in the coastal town of Banias in which at least 62 people, including babies, were killed."We have been seeing (these massacres) for over a year. What is shocking is the level of indifference. People shrug their shoulders and look away," said Houry.Since Syria never signed up to the treaty establishing the International Criminal Court, the court could only investigate allegations of brutality there with a referral from the United Nations Security Council - something permanent members Russia and China have so far blocked.RECONCILIATIONThe United States and Russia have proposed a peace conference to try to end the war, but savagery from both sides means that the unlikely event of a peace agreement might not stop atrocities and fighting between increasingly disparate militias."The ideas of reconciliation are now unrealistic. The conflict is as much about the conflict itself than pro- or anti-regime," Leenders said. "I see a total mismatch between the US and Russian narrative and what is going on in Syria."In its sectarian nature and big power inertia, the Syrian conflict has drawn comparisons with Bosnia, which was torn apart by Serbs, Croats and Muslims in a 1992-95 war that gave the world the term 'ethnic cleansing' and was marked by some of the worst atrocities in Europe since World War Two.Almost 17 years since that war ended, the wounds are still raw. Bodies are still being dug up and a cycle of blame and denial weighs on efforts to reconcile communities. Bitterness runs deep and spills into politics, stifling development.Details of the worst atrocities are coming to light even now. Each side clings to its own narrative of the war.In March, an ethnic Montenegrin man was jailed for 45 years for killing 31 people and raping at least 13, including a pregnant woman in front of her young child.The judge in the case said the defendant, Veselin Vlahovic, nicknamed Batko, sometimes forced his victims to kiss his hand as he beat them, and once ordered a man to have sex with the corpse of a woman whose throat had been cut.In Srebrenica, 8,000 Muslim men and boys were gunned down in five summer days in 1995, their bodies bulldozed into pits, buried and reburied in a bid to conceal the crime. Many Serbs still dispute the figures, despite mountains of testimony at the United Nations war crimes tribunal in The Hague.

Click for full JPost coverageThe strength of feeling on all sides has made political compromise in the name of peace difficult, at times impossible, and acts as a brake on development.In Lebanon, which lies next to Syria and fought its own 15-year civil war which ended in 1990, fault lines between religions remain strong and armed militias still come to blows as a weak government looks on helplessly.Many Lebanese fighters accused of war crimes are now politicians as people support powerful members of their sect to safeguard against the influence of their foes."We don't have real reconciliation in Lebanon right now. Reconciliation requires justice," said rights researcher Houry, who lives in Beirut. "There is a tear at the fabric of Syria, similar to what we saw in Lebanon."
Advertisement
Subscribe for our daily newsletter