Qatari station’s future now in doubt due to Saudi ultimatum. 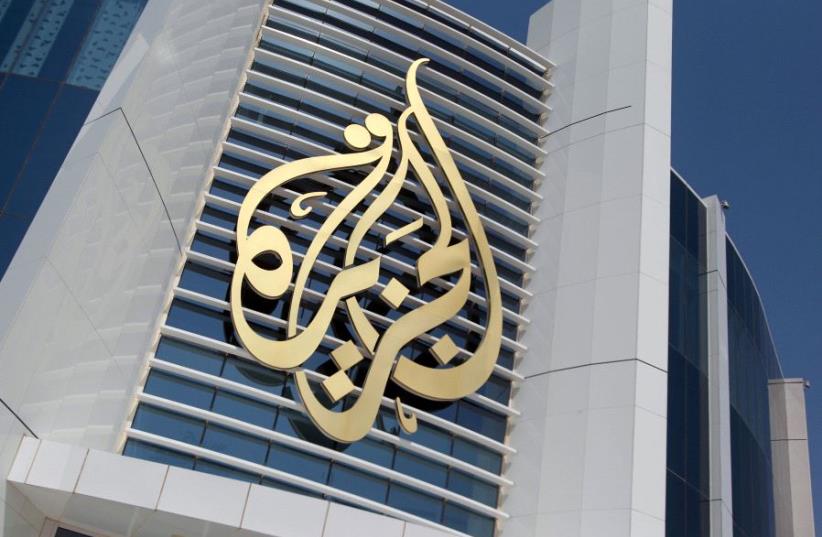 The logo of Al Jazeera Media Network is seen on its headquarters building in Doha, Qatar June 8, 2017.
(photo credit: REUTERS/NASEEM ZEITOON/FILE PHOTO)
Advertisement
At the heart of the current crisis pitting Saudi Arabia, Egypt, Bahrain and the United Arab Emirates against Qatar is Al Jazeera, the Qatari station that is the most widely watched television channel in the Arab world.Incensed by its sympathetic coverage of the Muslim Brotherhood, among other things, the allies are demanding that Qatar close the station as one of the conditions for lifting a diplomatic and trade embargo imposed on Doha. The crisis is adding further instability to an already unstable part of the world. US Secretary of State Rex Tillerson was due to speak on Tuesday with Qatari and Kuwaiti leaders in a bid to defuse the tensions.With dozens of bureaus, including one in Jerusalem, an English service, more than 3,000 employees and the power to frame political discourse and set the news agenda, Al Jazeera is as much an empire as it is a news organization.Part of this empire’s mission is to offer stimulating, accessible Arabic lessons to English and French speakers on its website Aljazeera.net. The service is free but some of the lessons come with the same spin that Al Jazeera puts on the news so the instruction becomes another way for Al Jazeera to spread its message.For example, a recent clip entitled “69 years ago it was the nakba” offered not only an opportunity to learn new vocabulary and grammar but also the Arab version of the War of Independence, known to Arabs as the nakba, or catastrophe.Against the backdrop of pictures of refugees and tents, a newscaster said: “With the involvement of the British occupier, the Zionist gangs were able to form forces on the ground. In 1948, the Arab armies lost their war with those gangs, leading to the expulsion of more than 750,000 Palestinians from their lands. Where did they go? Many went to neighboring countries, others went to the West Bank and Gaza.”The accompanying vocabulary list included the Arabic terms for: by force, truce, defeat, weapon, war, army, volunteers and ban.Grammar tested the student’s knowledge of prepositions with a multiple choice question: “The Palestinians were expelled from their land – by force, to force or in force.”Another lesson is about the Islamic Museum near al-Aksa mosque. “With its rare treasures, the Islamic Museum in Jerusalem offers visitors a great opportunity to learn about this holy city’s history and culture,” the lesson says.Yet another segment describes Palestinian Film Week in Cairo, which was held in April and featured a documentary about Marwan Barghouti, the Fatah leader serving multiple life sentences after being convicted of murders.But the Arabic lessons are by no means focused entirely on the Palestinians. They take advantage of the diverse deployments of Al Jazeera correspondents, providing a window on the Arab world and beyond. One television clip reported on the Pyongyang Metro, another on the Muslims of Japan celebrating Ramadan and another on the establishment of a new magazine about Arabic novels.Published in Beirut, its first edition contained criticism, interviews and an account by Egyptian novelist Nasser Irak on his experiences writing his novel al-Izbekiya.Another clip reported on a Muslim lifestyle fair in London that drew about 20,000 people in two days and featured scenes from a “modest fashion” show which demonstrated that models can walk a catwalk with only their faces showing and still be stylish.The lessons could not completely ignore the crisis with the Saudis. In Today’s Headlines, a segment described how a Qatari businessman decided to airlift 4,000 Australian and American cows to Qatar to secure a steady supply of milk in the face of the blockade.Each cow weighs about 590 kilograms, which meant that 60 trips by Qatar Airways were required to bring them to Doha, the segment reported.The site is interactive, allowing the user to send in questions. It also offers true/false and multiple choice exams so the user can gauge his progress. Grades range from “remarkable” for five of five correct answers, to “acceptable” for three out of five, to “please re-solve the exercise” for a score of zero.If the Saudis get their way and Al Jazeera is closed, it will have an impact on students of media Arabic at the Hebrew University who use the website as a learning tool.“Al Jazeera has made a completely excellent site,” said their instructor Anwar Ben Badis. “The tapes, the punctuation, the exercises, the entire interaction between the student and the site are excellent.Most of the topics are current. It’s user friendly and makes it easy for the student to learn.”