"Never before in the course of our surveys have peoples' fears risen so drastically within a year as in 2016," says head of survey center. 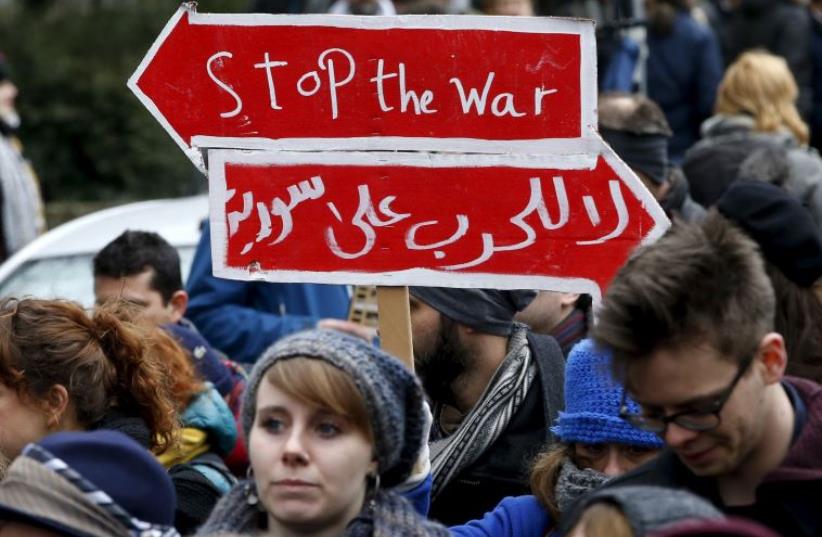 A participant of the so-called "Carnival of migrants" holds a banner as the take part in a rally to protest against racism in Berlin, Germany, March 20, 2016
(photo credit: REUTERS)
Advertisement
BERLIN - Germans have become far more fearful in the last year, with a possible terrorist attack, political extremism and the social effects of Europe's migrant crisis topping their list of worries, a survey showed on Tuesday.Just over a year before a federal election in Europe's biggest economy, the annual study by insurer R+V showed a 10 percentage point increase in its annual "fear index" of Germans to 49 percent."Never before in the course of our surveys have peoples' fears risen so drastically within a year as in 2016," said Brigitte Roemstedt, head of the R+V Info Center which conducted the survey of 2,400 Germans.Deadly Islamist attacks hitting neighboring France and Belgium have put Germany on high alert. In addition, more than one million migrants have entered the country, many from war-torn countries like Syria and Iraq, fueling concern about mounting costs and integration."Terror attacks, riots by extremists but also political polarization following uncontrolled mass migration are shaking Germans' characteristic need for security," said political scientist Manfred Schmidt of the Ruprecht-Karls University in Heidelberg who was a consultant for the survey.The top concern, terrorism, worried 73 percent of Germans compared to 52 percent last year.Second comes political extremism which causes anxiety among 68 percent of Germans, up from about half last year. Higher than ever before is the fear that migration could cause tensions between Germans and foreigners living in the country. With an 18 percent jump, 67 percent were worried about that.Political parties are likely to compete in offering solutions to these issues in the run-up to the 2017 election.German Chancellor Angela Merkel's conservatives and their coalition partner, the center-left Social Democrats, have in the last year lost support to the anti-immigrant Alternative for Germany (AfD).