The illegal car trade of the West Bank 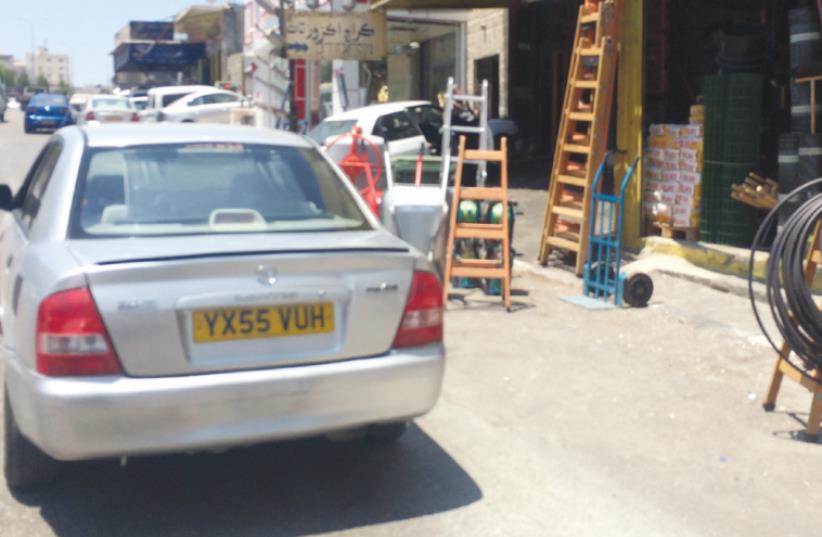 AN ILLEGAL late-model Mazda with false plates is seen yesterday on the main road of Eizariya.
(photo credit: ADAM RASGON)
Advertisement
The road from Eizariya to Abu Dis, located in the largely IDF-controlled areas B and C of the West Bank, is replete with restaurants, coffee shops, electronics, and illegal cars, many illegal cars. Without even asking car owners, Fadi, a resident of Abu Dis, knows exactly which cars are mushtuba, local slang for illegal cars. “Look, to your left, there’s another one,” he says.“Here in Eizariya, we have no law, so 90 percent of the cars are illegal,” he chuckles.Fadi’s car is illegal as well.“Why am I going to purchase a legal car for NIS 50,000, when I can purchase this car for NIS 1,500,” he says. “I need to drive to work and there is no affordable alternative.”He then points to Eizariya’s bus station. “Look, all those buses are illegal. We even have illegal buses,” he exclaims.Illegal cars in the West Bank all come from Israel and take two forms. Some of the cars are used, which Israelis sell to Palestinians, while other cars are stolen from Israel and then sold to Palestinians. In both cases, Palestinians purchase the cars for substantially reduced prices because they do not pay taxes on or licensing fees for them.Moreover, most Palestinian owners of illegal cars live in areas B and C of the West Bank, which means that they have little reason to fear the IDF or Palestinian Authority Security Forces will confiscate their cars. The IDF rarely enters areas B and C to pursue criminals, and when it does, it goes after more serious criminals. Furthermore, the PASF infrequently receives permission from the IDF to enter these areas.Nonetheless, the Palestinian Authority has fought against the trade in illegal cars for many years. In 1997, it passed a law banning used Israeli cars over three years old in the West Bank and instructed its security forces to confiscate and destroy them. Yet the number of illegal cars on West Bank roads has only grown.There are also many Facebook groups and shops for illegal cars. In Eizariya, finding a place to purchase an illegal car is not much more difficult than finding a falafel shop. PASF estimates that 50,000 Palestinians own illegal vehicles.Today, the PASF says that it wants to put an end to illegal cars in the West Bank.Palestinian Authority Police spokesman Louay Zreikat told The Jerusalem Post that security forces have already taken action. They are “confiscating and destroying illegal cars in addition to pursuing and arresting dealers,” he said.Zreikat specified that the PASF confiscated 700 illegal cars in the past few weeks, but were constrained by jurisdictional issues. “The security forces have succeeded in limiting the phenomenon of illegal cars, but cannot put an end to it as long as Israeli authorities do not allow the permanent presence of our forces in Area C,” he said.An Israeli security source told the Post that police units patrol the entrances and exits to villages and often confiscate and destroy illegal vehicles, but added such units stop short of entering villages to confiscate cars. Looking around Eizariya, it is evident that illegal cars will not disappear from this medium- sized Palestinian town any time soon. On the right side of the road near the main circle, a young man is screwing his new false license plate onto the back of his illegal car.