The smartest Palestinian teenager in all the land

Abdullah is a role model to her brother and fellow classmates. Since a very young age, she has independently organized her personal schedule and allocated a number of hours daily to study. 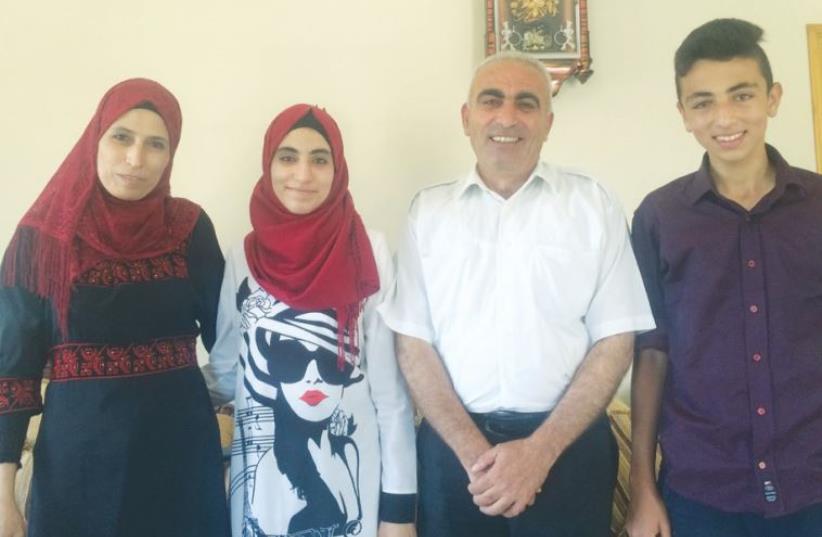 RAHAF MUFEED ABDULLAH (second left), who received the highest score on the Palestinian national standardized test, poses for a photo with her family.
(photo credit: ADAM RASGON)
Advertisement
Rahaf Mufeed Abdullah, a Palestinian high school senior from the West Bank village of Beita, became a Palestinian national heroine on Monday when Palestinian Authority Education Minister Sabri Saidam announced that she earned the highest score on the Tawjihi, a Palestinian national standardized test, in all of the West Bank, the Gaza Strip and east Jerusalem.Abdullah relayed the moment she heard her test results to The Jerusalem Post in an interview at her family’s modest house in Beita: “When I saw the message on my cellphone that I received a score of 99.7 percent, I was so happy, but I still didn’t know how I ranked compared to other students.“I then watched the televised press conference with my family, when the minister of education announced the top scorers, and I heard my first name. I paused and told myself that it can’t be me. Then he read my last name and everyone broke out into celebration,” she said.Palestinian high school seniors annually take the Tawjihi, which plays a major role in determining their future. Each program at the various Palestinian universities requires a minimal Tawjihi score for acceptance. An unsatisfactory score can close the door to higher education, while an exceptional score can pave the way to prestigious study programs and job opportunities.After Abdullah learned that she achieved the highest result, family, locals, and officials including the Education Ministry officials crowded her family’s living room to express their congratulations. They told her that she had achieved a great accomplishment and some people even told her she had achieved the greatest accomplishment ever for her village.Just before the Post arrived at her home, PA President Mahmoud Abbas called Abdullah and invited her to visit him in Ramallah at the Mukata, the PA governmental headquarters.Abdullah is a role model to her brother and fellow classmates. Since a very young age, she has independently organized her personal schedule and allocated a number of hours daily to study.“I have always started studying from the beginning of the school year. In that way, I feel prepared for tests and only have to do a moderate amount of review for them. I felt that this year was most relaxing because I had put many efforts into my studies throughout the years,” she said.When Abdullah is not studying for class, she is likely reading books. “I love reading books. In particular, I enjoy Arabic literature, especially Mustafa Sadiq al-Rafi’s works, English literature translated into Arabic, and the Koran,” she says.She also participates in many extracurricular activities, including academic competitions. Last year she came in second place in a national mathematics competition and a few years before that, she won competitions for memorizing the Koran and Hadith (prophetic sayings of the Prophet Muhammad).And even with an intense study schedule, an appetite for reading books, and frequently participating in academic competitions, Abdullah added that she still has time to hang out with friends and socialize.When asked about her hopes for the future of her fellow Palestinians, she shied away from getting into the details of politics, but said that she hopes for freedom for her people.“My wish is that Palestine will be free,” she said, adding, “I believe that peace is possible, but at the current moment the situation is difficult.”Next year, Abdullah intends to attend An-Najah University in Nablus to study computer engineering. She says that she wants to learn how to build programs and hopefully contribute to the technological infrastructure of the West Bank.Abdullah says that the secret to her success is setting a goal and then slowly taking steps toward it. Asked what her plans are for the summer, unsurprisingly she said that she plans to read books.