The authors of the report urged the United States to place sanctions against Green Without Borders. 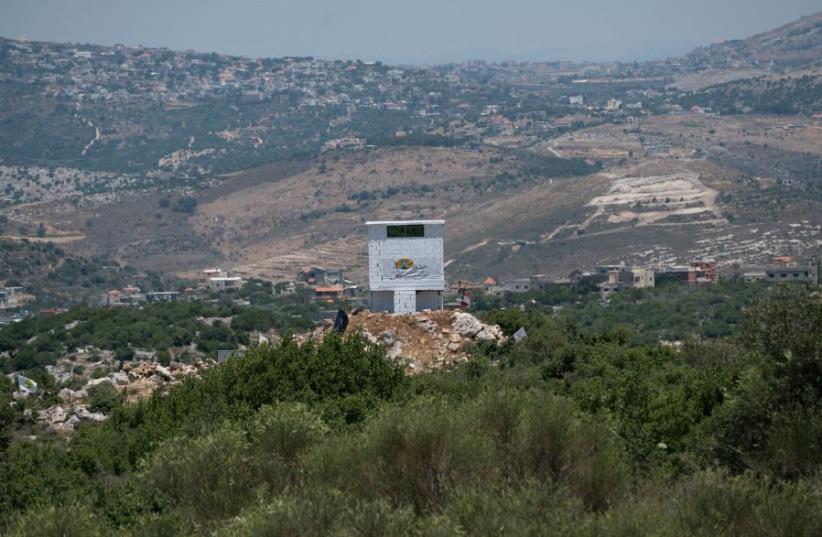 "Green Without Borders" Hezbollah outpost on Lebanese border
(photo credit: IDF)
Advertisement
The Lebanese environmental NGO Green Without Borders (GWB) should be added to the US Treasury Department’s Specially Designated Global Terror entities for their clear connections to Hezbollah, urged a new report released by a Washington-based think tank.“The organization provides clear and undeniable material support to Hezbollah, including for operational endeavors such as surveillance, anti-access/area-denial activities and rocket attacks,” read the report published by Matthew Levitt and Samantha Stern of The Washington Institute on Thursday.The authors of the report urged the United States to place sanctions against GWB, which has not yet been classified by Washington as being a terror entity. The report stated that Hezbollah’s construction arm, Jihad al-Binaa, which has been designated by the US Treasury Department since 2007, “is among GWB’s closest collaborators.“By building surveillance posts, denying the United Nations Interim Force in Lebanon (UNIFIL) unrestricted access in southern Lebanon, and granting Hezbollah logistical and operational platforms from which to fire rockets into Israel, GWB has effectively become part of Hezbollah’s military infrastructure,” it said.The IDF has accused Hezbollah of establishing GWB observation posts near the Blue Line bordering Lebanon and Israel since April 2016 in order to gather intelligence.The NGO does not try to hide its connection to Hezbollah, with its president Hajj Zuhair Nahle telling Lebanon’s Daily Star in 2017 that “we do not hide this affiliation. All our brochures include this and in all our media campaigns... we write, ‘The trees are the shade of the resistance.’”In the interview, and quoted in the report, Nahle said that the trees being planted along the border have a strategic dimension and serve “as a veil on the eyes of the enemy in addition to a wall behind which the resistance fighters protect themselves.”The report by also found that on September 1 of last year, Hezbollah fired the Kornet anti-tank missile (ATM) towards an IDF ambulance and post close to the border community of Avivim, from territory used by GWB.“Based on technical data, UNIFIL later concluded that the missiles were fired from the area of two adjacent GWB locations near the neighboring villages of Maroun al-Ras and Aitaroun,” it said.The report continued to say that while UNIFIL requested that the Lebanese Armed Forces (LAF) grant them access to the sites and the LAF confirmed it would “facilitate access,” the next day the UNIFIL patrol was granted “only partial access to the sites on the pretense that the land was private property,” despite “repeated communications by the [UNIFIL] Mission leadership with the Lebanese Armed Forces and the political leadership of Lebanon.”According to the report, GWB – which been accused by the IDF and the United Nations of being a front for Hezbollah – has 16 posts along the border with Israel, eight of them previously unpublished.One of the eight previously unidentified posts, east of the town of Yaroun, was identified as being the location from where Hezbollah fired the ATM.Other previously unidentified GWB posts, which are near the towns of Aalma El Chaeb, Dhayra, Tmaysh, Yaroun, Houla and Adaisseh, and east of the Israeli town of Metulla, contain watchtowers and other surveillance infrastructure for reconnaissance against the IDF.On April 14 a tense standoff between IDF and LAF troops took place along the border fence, after Israeli troops crossed into the buffer zone between the two countries to trim trees that had been planted by GWB to obscure cameras placed on the Israeli side of the border fence.The tense standoff near the Israeli town of Metulla was brought to an end by UNIFIL peacekeepers, who trimmed the trees themselves.Three days later and following an airstrike blamed on Israel targeting a Jeep in Syria believed to belong to Hezbollah, IDF troops discovered three breaches along the security fence near the communities of Avivim, Yiftah and Metula. Two of the breaches, near Avivim and Metula, took place near previously unidentified GWB locations.In addition, six cross-border attack tunnels discovered and destroyed by the IDF last year were dug by the terror group next to GWB posts near the southern Lebanese towns of Ramiyeh and Kfar Kila.According to the report, UNIFIL patrols have been denied access to areas related to Hezbollah’s attack tunnels by men in civilian clothing believed to be part of GWB.While Levitt and Stern could not unequivocally connect GBW to the tunnels, they wrote that due to their destruction, “Hezbollah is now even more dependent than before on using its purportedly civilian institutions for illegitimate operational purposes.”The report also called on Lebanon and the international community “live up to their commitments under UN Security Council Resolution 1701” and to “take concrete steps to address the threats to Lebanon’s sovereignty and regional stability posed by Hezbollah entities such as GWB” and to “avert another crisis – namely, a war on the southern border.”It also called on UNIFIL to do a better job at monitoring the situation along the Blue Line and reporting violations of Resolution 1701.
“Increasingly, UNIFIL reports have become overcautious, failing to document Hezbollah violations transparently for fear that the group could become still more aggressive toward UNIFIL soldiers and patrols,” the report stated.The failure by UNIFIL only “emboldened” GWB to use its posts to carry out the missile attack in September, Levitt and Stern said.