Trump: Middle East would be more stable if Saddam, Gaddafi still in power 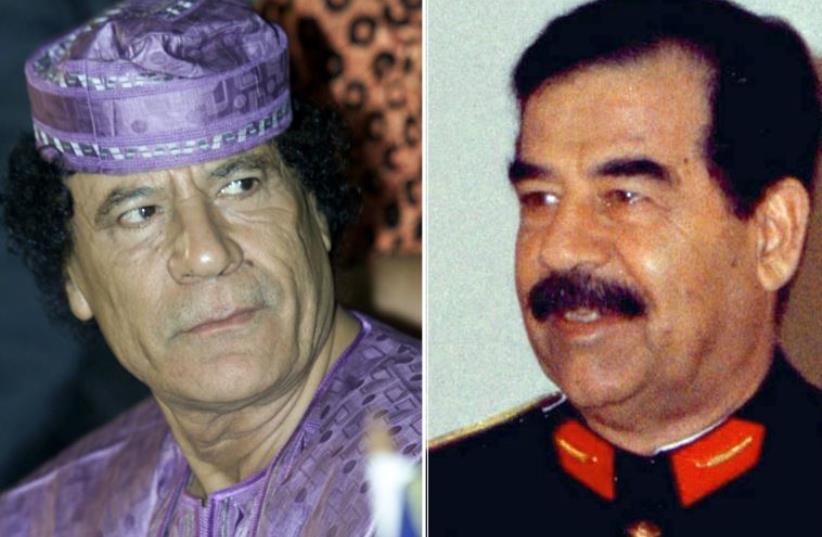 Deposed dictators Muammar Gaddafi of Libya (L) and Saddam Hussein of Iraq
(photo credit: REUTERS)
Advertisement
US Republican presidential front-runner Donald Trump said on Sunday the Middle East would be more stable if Muammar Gaddafi and Saddam Hussein were still in power in Libya and Iraq, saying it's "not even a contest."Trump mentioned the countries in comparison to current efforts to drive Syrian President Bashar Assad out of power."You can make the case, if you look at Libya, look at what we did there, it's a mess," Trump said on NBC."If you look at Saddam Hussein with Iraq, look what we did there, it's a mess. It's going to be the same thing" in Syria, he said.Asked by NBC's Chuck Todd if the Middle East would be more stable with Gaddafi and Saddam in power, Trump replied, "Of course it would be."Trump, who leads the field of Republicans seeking the presidency in the November 2016 election in public opinion polls, has said he supports Russian efforts to fight Islamic State militants, even though Russia has backed Assad.Trump said last week Assad might be replaced by someone worse if he were ousted.The White House opposes both Islamic State and Assad, blaming him for attacks on civilians that have radicalized the opposition. President Barack Obama warned Russia on Friday that its campaign in Syria would pull Moscow into a "quagmire."