Days before US President Donald Trump arrives in the region for his official visit, he spoke with Jordan's Kind Abdullah II and with Prime Minister Benjamin Netanyahu. 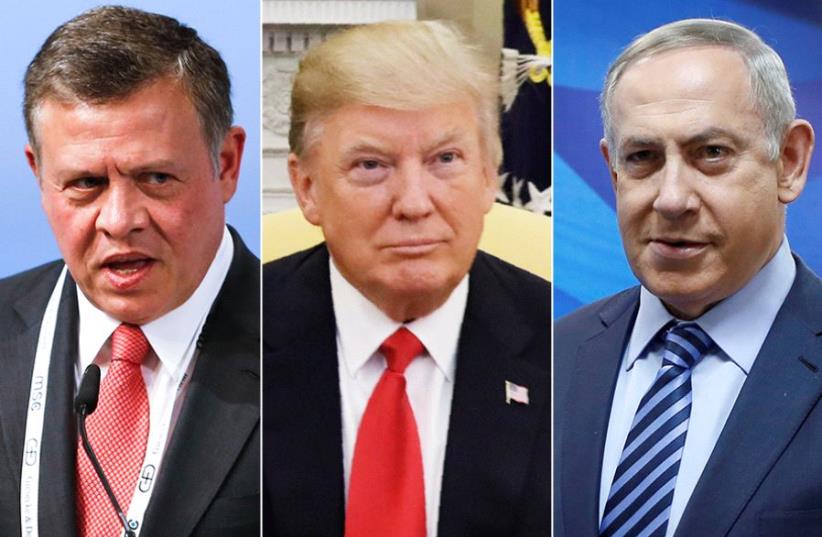 King Abdullah, Trump and Netanyahu
(photo credit: REUTERS)
Advertisement
US President Donald Trump spoke with Prime Minister Benjamin Netanyahu and Jordan’s King Abdullah II on Tuesday, in advance of his trip to the region next week.The White House did not publish a read-out of the Netanyahu phone call, but the Prime Minister’s Office said it lasted for 20 minutes.According to Army Radio, US special envoy Jason Greenblatt will be in Israel and the Palestinian territories on Wednesday and Thursday in preparation for the visit.The Trump-Netanyahu phone call comes on the heels of a number of public disputes between the US and Israel in advance of the trip.Two US officials in Jerusalem told an Israeli team preparing for Trump’s visit on Monday that the Western Wall was in the West Bank and was not under Israeli sovereignty.This was followed by media reports that Trump had given the Russians sensitive intelligence information obtained from Israel about an ISIS plot to blow up a US-bound plane by using a laptop computer.The PMO’s office said that the “only topic” the two men discussed was “the upcoming visit.”Trump will travel first to Saudi Arabia and will land in Israel on May 22. He will also visit the Palestinian territories before leaving on May 23 for Rome and then Belgium.
Netanyahu hails "new day" in Israel-US relations after meeting with Trump (credit: REUTERS)
Jordan is not on his itinerary.There was some media speculation that the call involved the intelligence leak to Russia.According to the White House, Trump and King Abdullah on Tuesday reaffirmed the “importance of close and continued cooperation” between their two countries.“The two leaders discussed efforts to end the crisis in Syria, and agreed on the urgent need to de-escalate violence,” the White House said.Trump reiterated the US’s commitment to “Jordan’s stability, security, and prosperity and thanked the King for Jordan’s critical contributions in our shared fight to defeat ISIS,” the White House said.