Erdogan tells security forces to do "whatever necessary" to keep square clear on anniversary of biggest anti-government protests in decades.

By REUTERS
MAY 31, 2014 21:06
Plain clothes police officers detain a demonstrator during a protest in Istanbul May 31, 2014.
(photo credit: REUTERS)
Advertisement 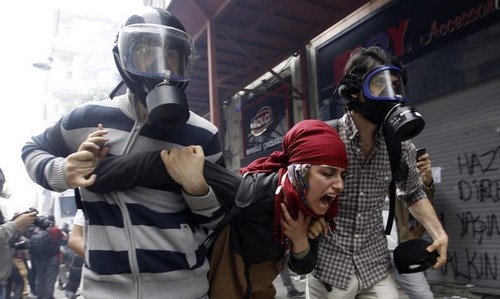 Plain clothes police officers detain a demonstrator during a protest in Istanbul May 31, 2014 (Reuters)
ISTANBUL - Turkish police fired teargas and water cannon on Saturday to disperse protesters in central Istanbul who sought to mark the one-year anniversary of the country's biggest anti-government demonstrations in decades.
Authorities closed roads and stopped public transport to deny access to Taksim Square and the adjoining Gezi Park where government plans to raze the green space and build a shopping mall sparked last year's unrest.
Police lines kept back activists who had hoped to read a statement at Taksim Square and lay flowers at the park to commemorate the deaths of at least six people in the protests against Prime Minister Tayyip Erdogan's rule.
Another half-dozen people died in sporadic unrest in the ensuing months as anger at Erdogan and his AK Party simmered.
Hundreds of people chanted "Resign, murderer AKP," and "Everywhere is Taksim, everywhere is resistance" on the busy shopping street Istiklal that leads to Taksim before police fired teargas at the crowd, forcing it to retreat.
Police also broke up protests in the capital Ankara and the southern city of Adana, CNN Turk reported.
At least three people were detained in Istanbul, witnesses said. Police helicopters circled overhead.
Tourists lugging suitcases were forced to turn back to escape the stinging gas. A few hundred protesters carrying political banners ran away from police down a hill towards the Bosphorous Strait, the waterway bisecting Istanbul.
'GAMES'
Earlier in the day, Erdogan warned people to stay out of Taksim, saying security forces would not tolerate any march on the square.
"Our security forces have clear orders. They will do whatever is necessary from A to Z," Erdogan said at a ceremony in Istanbul that was broadcast live by the NTV news channel.
"Don't fall for these games. This is not about environmentalism. There is no sincerity or honesty here."
On May 31, 2013, police forcefully evicted environmentalists from Gezi Park who had staged a peaceful sit-in for several days to try to stop government plans to erect a shopping centre and luxury flats in one of central Istanbul's few remaining parks.
Angered by the use of violence, tens of thousands of people from a variety of political backgrounds descended on Gezi and occupied Taksim Square for two weeks before authorities finally cleared the space.
Many at Gezi complained of as authoritarianism as Erdogan, a religious conservative who dominates the Turkish political scene, marked a decade in office.
On Saturday, riot police circled the perimeter of Gezi, and hundreds of plainclothes officers carrying batons patrolled. Newspapers said 25,000 officers had been deployed on Saturday.
The metro station at Taksim was closed and the governor halted ferryboat services between Istanbul's shores on either side of the Bosphorus Strait.
Elif Cetinkaya, 45, and her family gathered across the street from Gezi Park - one of the few green spaces in Europe's biggest city - on Saturday in quiet protest, wearing T-shirts with the images of those killed in the 2013 unrest.
"Why did so many people have to die to save this park? We are here to mourn their loss and show that we stand firm, no matter what obstacles they erect," Cetinkaya said.
The protest movement appeared to have little impact on the ruling AK Party's political fortunes when it won national municipal elections in March.
The movement has lost much of its momentum since, said one member of a leftist party who wore a scarf to ward off teargas.
"After the election, many people felt nothing makes a difference. There's no one issue now for everyone to rally around," he said, requesting anonymity.
Advertisement
Subscribe for our daily newsletter