Turkey, which has the second-largest army in NATO, scrambled two F-16 jets on Saturday after a Russian warplane crossed into its airspace, the foreign ministry said. 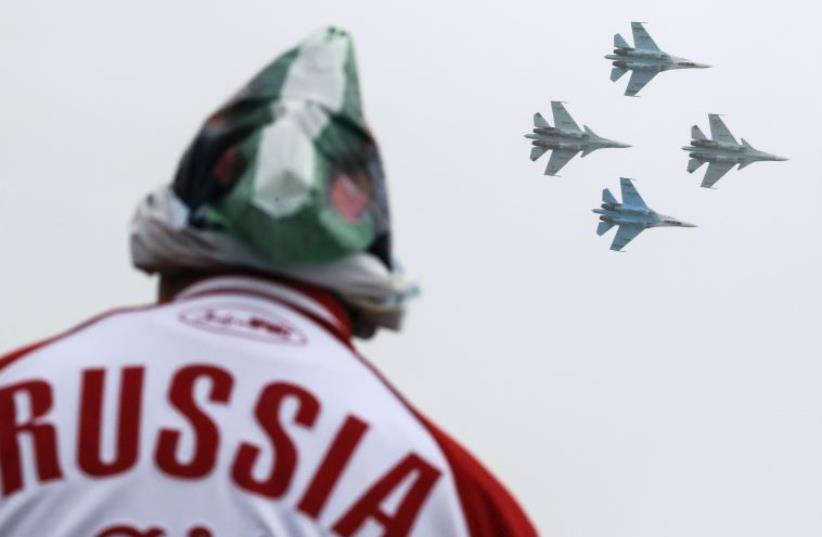 A spectator watches Sukhoi Su-30SM jet fighters of the Sokoly Rossii (Falcons of Russia) aerobatic team perform during the MAKS International Aviation and Space Salon in Zhukovsky, outside Moscow
(photo credit: REUTERS)
Advertisement
Turkey said on Monday it had summoned Russia's ambassador to protest the violation of its airspace by one of its warplanes and was told it was a "mistake" that would not happen again.Turkey, which has the second-largest army in NATO, scrambled two F-16 jets on Saturday after a Russian warplane crossed into its airspace near the province of Hatay, which borders Syria, the foreign ministry said.In a second incident, the Turkish military said a MiG-29 fighter jet -- an aircraft used by both Russia and Syria -- had harassed two of its F-16s by locking its radar on to them on Sunday as they patrolled the border.Speaking in a live interview on HaberTurk TV, Prime Minister Ahmet Davutoglu accused Moscow of escalating the Syrian crisis by entering the conflict.Russian air strikes in Syria, launched last week, have wrong-footed both the United States and its allies including Turkey, which says lasting peace can only be achieved with President Bashar al-Assad's removal. Moscow says its intervention aims to weaken Islamic State militants, but Ankara and Western powers see it as support for Assad."What we have received from Russia this morning is that this was a mistake and that they respect Turkey's borders and this will not happen again," Davutoglu said of Saturday's airspace violation, making clear Turkey would respond if provoked."Turkey's rules of engagement apply to all planes, be they Syrian, Russian or from elsewhere. Turkey's armed forces are very clearly instructed. Necessary steps would be taken against whoever violates Turkey's borders, even if it's a bird," he said in the interview."For Russia, which long opposed foreign intervention in Syria and blocked UN Security Council resolutions, to be actively involved in Syria is both a contradiction and a move that has escalated the crisis."U.S. Defense Secretary Ash Carter said Washington was conferring with Turkey about the incursion. Speaking during a trip to Spain, he also compared Moscow's effort to bolster Assad to tethering itself to a sinking ship."By taking military action in Syria against moderate groups targets, Russia has escalated the civil war," Carter said in a speech in Madrid.Turkish President Tayyip Erdogan has criticised Russia's actions as a "grave mistake"."Assad has committed state terrorism, and unfortunately you find Russia and Iran defending (him)," Erdogan was quoted by the Hurriyet newspaper as telling a crowd of supporters in Strasbourg, France, late on Sunday."Those countries that collaborate with the regime will account for it in history," he said.The Turkish foreign ministry said it had summoned Moscow's ambassador to protest the violation and urged Russia against any repeat, warning that it would be held "responsible for any undesired incident that may occur."Foreign Minister Feridun Sinirlioglu spoke with his Russian counterpart Sergei Lavrov, as well as key NATO partners, the statement said.Kremlin spokesman Dmitry Peskov confirmed that the Russian ambassador had been summoned, telling reporters that "some facts were mentioned there which are to be checked". There was no emergency meeting planned between Erdogan and his Russian counterpart Vladimir Putin, Peskov said."(The) Russian incursion into Turkish airspace raises stakes in what is already a high risk situation," British Foreign Secretary Philip Hammond said on Twitter, calling on Moscow to desist.