Turkey has long been a reluctant partner in the US-led coalition against Islamic State. 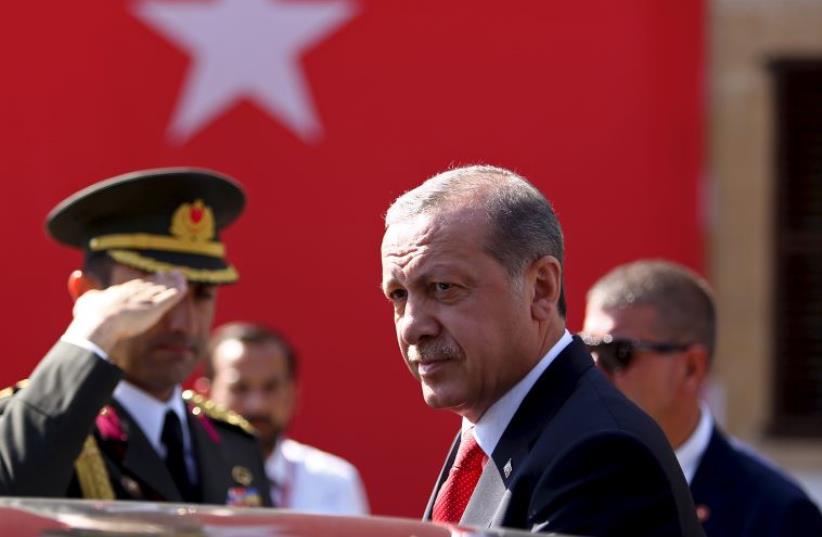 Turkish President Recep Tayyip Erdogan visits North Cyprus
(photo credit: REUTERS)
Advertisement
Turkish warplanes pounded Islamic State targets in Syria for the first time on Friday, with President Recep Tayyip Erdogan promising more decisive action against both the jihadists and Kurdish militants at home.The air strikes, which followed a phone conversation between Erdogan and US President Barack Obama on Wednesday, were accompanied by a series of police raids across Turkey to detain hundreds of suspected militants, including from Kurdish groups.Turkey has long been a reluctant partner in the US-led coalition against Islamic State, emphasizing instead the need to oust Syrian President Bashar Assad and saying Syrian Kurdish forces also pose a grave security threat.But Friday's attacks, which officials said were launched from Turkish airspace, signaled that Ankara would crack down against Islamic State across the Syrian border, while pursuing the banned Kurdistan Workers Party (PKK) - which Ankara describes as a separatist organization - at home."In our phone call with Obama, we reiterated our determination in the struggle against the separatist organization and the Islamic State," Erdogan told reporters. "We took the first step last night."Ankara acted hours after officials in Washington said it had agreed to let US jets launch air strikes from a base near the Syrian border, dropping an earlier refusal to allow manned American bombing raids.Turkey has faced increasing insecurity along its 900-km (560-mile) frontier with Syria. A cross-border firefight on Thursday between the army and Islamic State, which has seized large areas of Syria and Iraq, left one militant and one soldier dead.It has also suffered a wave of violence in largely Kurdish southeastern Turkey after a suspected Islamic State suicide bombing killed 32 people, many of them Kurds, in the town of Suruc on the Syrian border this week.But Erdogan's critics say he is more concerned with keeping Syrian Kurdish fighters in check, afraid that gains they have made against Islamic State in the Syrian civil war will embolden Turkey's own 14 million-strong Kurdish minority."Even though Erdogan has so far failed to achieve his goals in Syria - the overthrow of Assad - and Islamic State has become a problem, it is nevertheless a convenient instrument for him," said Halil Karaveli, managing editor of The Turkey Analyst, a policy journal."Now he has all the excuses he needs to go after the Kurds and also it makes him look very good in the eyes of the US, which will be happy that Turkey is on board in the coalition."Three F-16 fighter jets took off from a base in Diyarbakir, southeast Turkey, early on Friday and hit two Islamic State bases and one "assembly point" before returning, the prime minister's office said in a statement."We can't say this is the beginning of a military campaign, but certainly the policy will be more involved, active and more engaged," a Turkish government official told Reuters. "But action won't likely be taken unprompted."Police also rounded up nearly 300 people in Friday's raids against suspected Islamic State and Kurdish militants, Prime Minister Prime Minister Ahmet Davutoglu said after vowing to fight all "terrorist groups" equally.Local media reported that helicopters and more than 5,000 officers, including special forces, were deployed in the operation. Anti-terror police raided more than 100 locations across Istanbul alone, broadcasters CNN Turk and NTV reported.One senior official told Reuters: "This morning's air strike and operation against terrorist groups domestically are steps taken as preventive measures against a possible attack against Turkey from within or from outside ... There has been a move to active defense from passive defense."Turkey has repeatedly said it would take any "necessary measures" to protect itself from attack by both Islamic State and Kurdish militants.US defense officials said on Thursday that Turkey has agreed to allow manned US planes to stage air strikes against Islamic State militants from an air base at Incirlik, close to the Syrian border. US drones are already launched from the base.Obama and Erdogan agreed in their call on Wednesday to work together to stem the flow of foreign fighters and secure Turkey's border.The ability to fly manned bombing raids out of Incirlik against targets in nearby Syria could be a big advantage. Such flights have had to fly mainly from the Gulf.Turkey's stance has frustrated some of its NATO allies, including the United States, whose priority is fighting Islamic State rather than Assad. The allies have urged Turkey to do more to prevent its border being used as a conduit to Syria by foreign jihadists.