Relations between Ankara and Moscow are already at their worst in recent memory after Turkey shot down a Russian warplane over Syria last month. 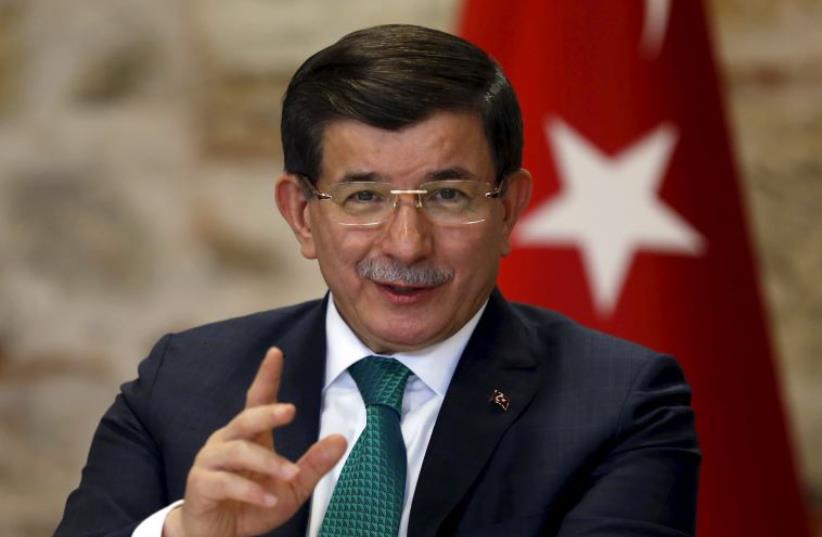 Turkish Prime Minister Ahmet Davutoglu
(photo credit: REUTERS)
Advertisement
ANKARA - Turkish Prime Minister Ahmet Davutoglu on Tuesday condemned an attack on the rebel-held Syrian city of Idlib, believed to have been carried out by Russian jets, and said Syria will not be part of "Russian imperialist goals".Relations between Ankara and Moscow are already at their worst in recent memory after Turkey shot down a Russian warplane over Syria last month.This weekend's air strikes killed scores of people in the center of Idlib in northwest Syria on Sunday, rescue workers and residents said.Turkey, which has long called for the ousting of Syrian President Bashar Assad and supports the rebels who have been fighting against him for four years, has been highly critical of Russia's role in the region. Moscow is a longtime ally of Assad."Syrian lands are not, and will not be, a part of Russia's imperialist goals," Davutoglu told members of his ruling AK Party in parliament.Russia began a major campaign of air strikes on Sept. 30 in support of Assad, whose forces have suffered setbacks this year including the loss of Idlib province and other areas of crucial strategic importance.Davutoglu also said that talks on restoring ties with Israel were continuing and Ankara was insisting on its demands for compensation and for "lifting restrictions" on Gaza, which is subject to an Israeli blockade.Israel's once-strong ties to Turkey soured in 2010 when Israeli commandos killed 10 Turkish activists when they stormed a ship in a convoy seeking to break an Israeli naval blockade of the Palestinian territory of Gaza.