Turkey’s Tourism Plummets amid Bombings and Crisis with Russia 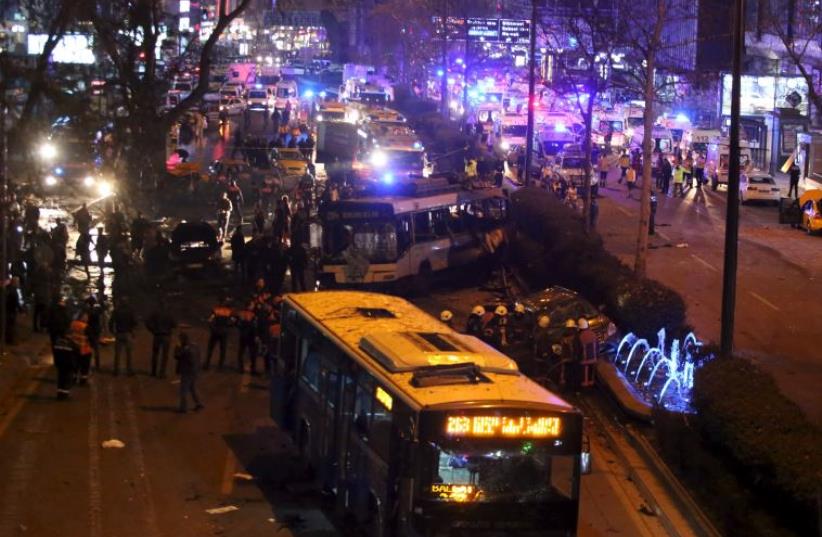 Ankara, Turkey explosion kills over two dozen March 13, 2016
(photo credit: REUTERS)
Advertisement
ISTANBUL -- A series of political bombings in major cities and a diplomatic crisis with Russia have wreaked havoc on Turkey’s tourism industry, triggering the sharpest slump since 1999.“Not only is the country facing terrorist attacks, it also suffers from political turmoil, challenges from bordering the Syrian war and a political dispute with Russia,” said a representative from the World Travel and Tourism Council (WTTC) in an e-mail to The Media Line.“While our sector normally is very resilient, the combination of the different factors in the country have led to a significant drop in international visitors.”Foreign visitors to Turkey fell by 28 per cent in April compared to the year before, according to the Tourism Ministry, which is problematic because tourism contributes significantly to Turkey’s economy, and the high season has started.“Turkey has a deficit. One of the important sources to fill that as much as possible is tourism,” Selim Koru, a researcher at The Economic Policy Research Foundation of Turkey (TEPAV), told The Media Line.Istanbul’s hotel occupancy rates are the lowest in a decade according to the Hotel Association of Turkey. Murat Ersoy, the head of the Tourism Investors Association, warned at a press conference on June 1 that tourism revenue losses could reach $15 billion this year.A diplomatic crisis with Russia was sparked last November when Turkey shot down a Russian jet it said had violated its airspace near the border with Syria. Moscow responded by stopping Russian tour operators from going to Turkey. In the major Mediterranean resort town Antalya, the number of normally ubiquitous Russian tourists has plunged by 96 per cent, with only 21,000 visiting from January to May.The number of Russian tourists, the second highest after Germany and usually representing one tenth of Turkey’s total, declined by 79 per cent in April compared to the previous year. German tourists also dropped by 35 per cent and British by 24 per cent.Terror attacks have also scared away many tourists.The Kurdistan Freedom Falcons (TAK) set off a car bomb on June 7 that killed six police officers and five civilians in Istanbul’s touristic Vezneciler neighborhood near an historic mosque and Istanbul University.Following the attack TAK released a statement saying, "Foreigners are not our target but Turkey is no longer a safe country for them. We have just started the war."The next day, the Kurdistan Workers’ Party (PKK) set off a car bomb that killed three police officers, one of them pregnant, and three civilians, in the southeastern town of Midyat, also a tourist attraction.Suicide bombers linked to the Islamic State have killed several tourists in Istanbul in recent months, including 12 Germans and one Peruvian in January, and three Israelis (two of them with American citizenship) and one Iranian in March.Fighters linked to the PKK and ISIS have killed nearly 100 people in bombings in major cities in Turkey so far this year.Koru says most tourists don’t understand the complexities of political violence in Turkey, but it’s enough to keep them away.“It doesn’t really matter to the tourists who does the bombing. If there are bombs going off, they’re uncomfortable.”As for Turks themselves, Koru says they tend to stay home on evenings and weekends for a week or two after each attack. He says Turks aren’t used to large bombings in major urban centers, and have less experience with this sort of violence than some neighboring countries.“In Turkey, people have a lower tolerance towards this sort of thing,” he says. “In some ways we’re in untested waters.”The PKK and the Turkish state have been fighting each other since 1984 in a conflict that has killed more than 40,000. Last July, the PKK broke a 2 ½ year old ceasefire, and since then the state has waged a military campaign in the southeast portion of the country that Amnesty International has called “collective punishment.”TAK emerged in 2004 as a smaller, more radical splinter group from the PKK, pledging to target civilians in the west of Turkey and unwilling to negotiate with the government. Though there’s no solid evidence of concrete links between the two groups, Koru says there’s good reason to believe they exist. “Nobody I’ve talked to knows exactly the way the PKK-TAK relationship works, but we know that the PKK doesn’t allow independent groups to exist within its own political sphere. There are no alternative groups to the PKK. And it’s very clear that PKK militants go over to TAK,” he says.Koru says Turkey is full of soft targets, and the PKK attacks targets in the west because it wants to show its supporters it can hit Turkey wherever it wants.“[The PKK] wants to be seen as powerful, because if it’s seen as powerful, people will support it,” he says.The WTTC told The Media Line that the Turkish government is trying to alleviate losses to the tourism sector.“In May, the Turkish government launched a ‘2016 Tourism Action Plan’ to help boost the country’s tourism. The Plan allows the delay of the sector’s debt payment, provides a grant-in-aid within action package and also offers subsidies per flight for tourism agencies.”According to the Association of Turkish Travel Agencies, Turkish firms are focusing on drawing high-income tourists from the United States and Latin America, and hope to receive more tourists from Iran thanks to the lifting of sanctions. Their numbers also indicate that Israeli tourists increased to 225,000 in 2015, compared to 110,000 in 2010, possibly due to recently improved ties between Turkey and Israel.