Major powers agreed earlier on Friday to a pause in combat in Syria, but Russia pressed on with bombing in support of its ally President Bashar al-Assad. 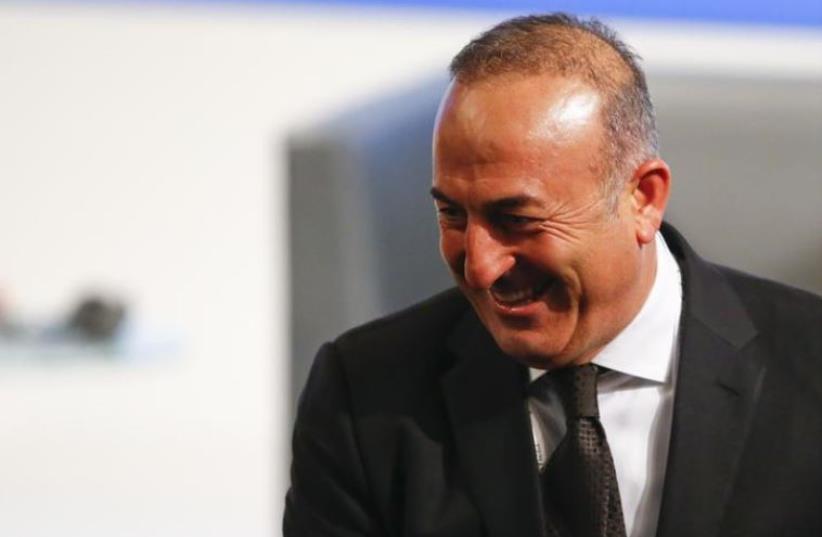 Turkey's Foreign Minister Mevlut Cavusoglu arrives at the Munich Security Conference in Munich, Germany, February 12, 2016.
(photo credit: REUTERS)
Advertisement
Turkey's foreign minister said on Friday that Russia was targeting schools and hospitals as part of its bombing campaign in Syria.Speaking at a security conference in Munich, Mevlut Cavusoglu put the blame squarely on Moscow for the wave of tens of thousands of people who have arrived at the Turkish border over the past week."Why do these people have to leave their homes? They stayed there (in Syria) for five years, despite all these terrors from the brutal regime. But because of the Russian bombings - and Russia continues, despite the agreement we made last night, Russia continues bombing the civilians. They killed 16 civilians this morning, they even targeted schools and hospitals as well - therefore these people fleeing, they are fleeing from the Russian bombings," he said.Russian Prime Minister Dmitry Medvedev rejected accusations on Saturday that his country's forces have bombed civilians in Syria, saying this was "just not true"."There is no evidence of our bombing civilians, even though everyone is accusing us of this," Medvedev told a security conference in Munich, moments after French Prime Minister Manuel Valls said Russian bombing of civilians must stop."Russia is not trying to achieve some secret goals in Syria. We are simply trying to protect our national interests," he said, adding that Moscow wanted to prevent militant extremists getting to Russia.Major powers agreed earlier on Friday to a pause in combat in Syria, but Russia pressed on with bombing in support of its ally President Bashar al-Assad, who vowed to fight until he regained full control of the country.Although billed as a potential breakthrough, the "cessation of hostilities" agreement does not take effect for a week, at a time when Assad's government is poised to win its biggest victory of the war with the backing of Russian air power.If implemented, the deal hammered out at talks in Munich would allow humanitarian aid to reach besieged towns. It was described by the countries that took part as a rare diplomatic success in a conflict that has fractured the Middle East, killed at least 250,000 people, made 11 million homeless and sent hundreds of thousands fleeing into Europe.