Bono has lobbied in Washington and other world capitals for a variety of causes including debt relief, alleviating world poverty and fighting AIDS. 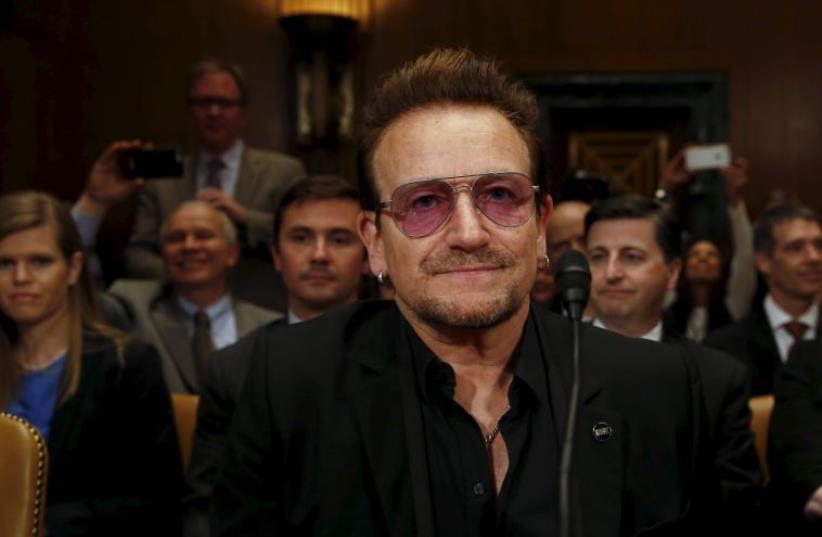 U2 lead singer Bono attends a Senate Appropriations State, Foreign Operations and Related Programs Subcommittee hearing on causes and consequences of violent extremism and the role of foreign assistance on Capitol Hill in Washington April 12, 2016.
(photo credit: REUTERS)
Advertisement
WASHINGTON -U2 lead singer Bono appealed to Congress on Tuesday for a "Marshall Plan" to provide aid to the Middle East much like the massive relief the United States provided to rebuild Europe and counter extremism after World War Two."When aid is structured properly, with a focus on fighting poverty and improving governance, it could just be the best bulwark we have against the extremism of our age," the rock star and anti-poverty campaigner testified to the Senate Appropriations subcommittee that oversees foreign aid.Bono urged US lawmakers to act quickly to counteract "an existential crisis" in Europe, with nationalist parties rising in several countries and even Britain considering leaving the European Union.The hearing took place as lawmakers put the final touches on a new spending plan that may include steep international aid cuts.But Republican Senator Lindsey Graham, the panel's chairman, has called for a multibillion-dollar aid program to address the crisis in the Middle East and deal with millions of refugees fleeing violence in Syria, Iraq and other countries.Backers of the plan say defeating Islamic State and other militant groups, and preventing the rise of new ones, will require humanitarian aid and economic development."I'm a pretty hawkish fellow, but I learned a long time ago ... that you are not going to win this war by killing terrorists," Graham said."We have a moment now that we haven't had in decades" in terms of political attention to the issue, said Kelly Clements, deputy high commissioner of the United Nations High Commissioner for Refugees.Graham will have a difficult time getting support for a Middle East aid program from his fellow Republicans, who tend to be skeptical about international organizations like the United Nations and generally want tight controls on government spending.At the hearing, Republican senators expressed concern about being effective for the American taxpayer and roles for partnerships with private companies.Bono, who co-founded the international advocacy group ONE, has lobbied in world capitals for causes including debt relief, alleviating poverty and fighting AIDS.He offered one novel suggestion for countering extremism."Don't laugh," Bono said, suggesting that the Senate "send in" comedians Amy Schumer, Chris Rock and Sacha Baron Cohen to counteract the militants' violent message."If you laugh at them when they're goose-stepping down the street, then it takes away their power," he said.