Investigators say it is vital to known the "chain of custody" of samples after reports Assad's forces used nerve gas.

By REUTERS
JUNE 6, 2013 00:48
Syrian wear gas maks after shelling 370
(photo credit: REUTERS/Muzaffar Salman)
Advertisement
UNITED NATIONS - UN investigators reacted cautiously on Wednesday to France's announcement that laboratory tests proved that President Bashar Assad's forces had used nerve gas in Syria's civil war, saying it was vital to know the chain of custody of the samples.French officials said on Tuesday that their tests were the first to comply with international standards and prove that chemical weapons were used in Syria. Paris handed the results to the UN chemical weapons investigation team, headed by Swedish scientist Ake Sellstrom."Yesterday in Paris, Mr. Sellstrom received additional information related to the reports of the alleged use of chemical weapons in Syria submitted by the government of France," the United Nations said in a statement."Mr. Sellstrom cautions that the validity of the information is not ensured in the absence of convincing evidence of the chain-of-custody of the data collected," it said.The White House also reacted cautiously to the French announcement, saying on Tuesday the United States was not ready to say the Syrian government used chemical weapons in the war-ravaged country.Britain said last week that it wrote to UN Secretary-General Ban Ki-moon about additional suspected chemical weapons attacks in March and April by Syrian government forces. The British letter referred to three different sites in Syria.Britain's UN Ambassador Mark Lyall Grant told reporters on Tuesday that London had evidence of the use of sarin gas and other chemicals in Syria.

Click for full JPost coverage"The evidence that we have suggests that there is a use of a number of different variants of chemical agents, a combination of agents in some cases, sometimes including sarin, sometimes not," said Lyall Grant, who is president of the UN Security Council for June."It is relatively small quantities, but nonetheless, repeated use and any use of chemical weapons is abhorrent," he said.The Syrian government has denied using chemical weapons and has in turn accused rebels of deploying them in the two-year civil war that the United Nations says has killed over 80,000 people. 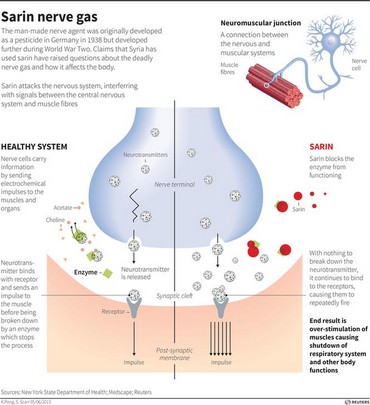 Sellstrom's team of chemical weapons experts has been ready for well over a month to enter Syria to investigate the allegations but has been held up by diplomatic wrangling and safety concerns.Ban has urged Syria to give the experts unfettered access to investigate all alleged chemical arms incidents. But Assad's government only wants the UN team to probe an incident in Aleppo from March. UN diplomats say UN-Syria negotiations on access have reached a deadlock.The UN statement on Wednesday made clear Sellstrom believes the only way to conduct a proper investigation is by going to Syria."On-site activities are essential if the United Nations is to be able to establish the facts," he said.
Advertisement
Subscribe for our daily newsletter