The 95-page report is based on interviews with 200 witnesses and victims and 900 individual complaints. 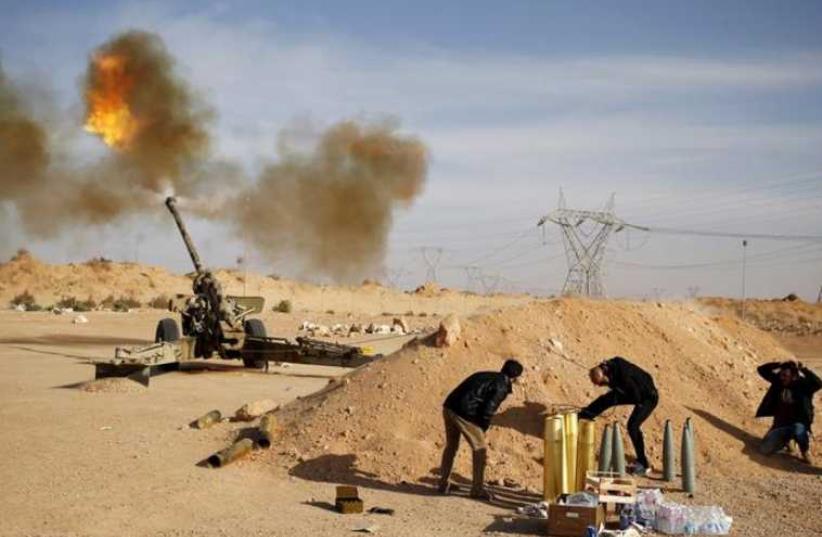 Libya Dawn fighters fire an artillery cannon at IS militants near Sirte.
(photo credit: REUTERS)
Advertisement
GENEVA - All sides in Libya have committed war crimes and other human rights abuses in the past two years and those responsible should face investigation and prosecution by the International Criminal Court (ICC), a United Nations report said on Thursday.An investigation by six .. human rights officers compiled evidence of executions of captives, assassinations of prominent women activists, widespread torture, sexual crimes, abductions, indiscriminate military attacks on civilian areas, and abuse of children since the start of 2014."One of the most striking elements of this report lies in the complete impunity which continues to prevail in Libya and the systemic failures of the justice system," UN High Commissioner for Human Rights Zeid Ra'ad al-Hussein said in a statement.The UN had recorded names of those allegedly responsible and there was "a process for engagement with appropriate bodies" such as the ICC, which has jurisdiction but not brought any prosecutions, said Gurdip Sangha, Libya desk officer at the UN human rights office.He declined to say how many such names there were, saying there were varying degrees of evidence and corroboration in different cases.The 95-page report, based on interviews with 200 witnesses and victims and 900 individual complaints, catalogs atrocities in a country that dissolved into chaos after the overthrow of Muammar Gaddafi in 2011.Since 2014 Libya has had two competing governments, both supported by loose alliances of former rebels and armed brigades. A unity government has been nominated under a U.-backed plan but has yet to win approval or move to Libya.Islamic State militants took control of Gaddafi's home town of Sirte last year, and Libya's coast has served as a major hub for migrants and refugees on their way to Europe.The investigators heard credible reports of women detained in migrant camps being raped by guards and gathered evidence of torture in at least 22 places of detention.Boys aged 10 and 14 described being sexually abused after being forced into religious and military training with Islamic State."I knew what I had to do, I had to take my clothes off and turn around and bend over facing the wall," one boy said, describing most evenings in the service of an Islamist foreign fighter.The other said he was raped by several fighters in order to "break me so that I will never say no".