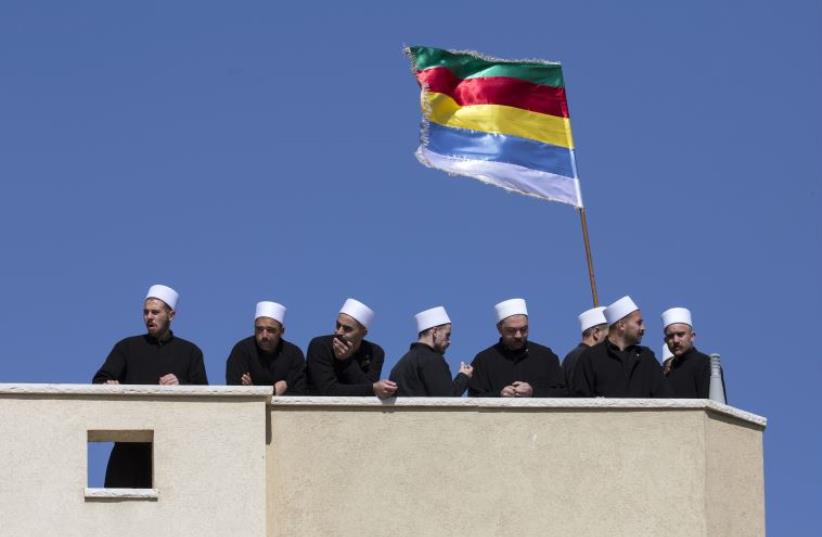 Members of the Druze community stand near a Druze flag during a rally in the Druze village of Majdal Shams.
(photo credit: REUTERS)
Advertisement
The current crisis between the Druse in Syria and rebel terrorist groups is showing that Druse across the region are more united than previously thought.Spread among Syria, Lebanon, Israel and Jordan, the Druse are considered heretics by al-Qaida and Islamic State because of their religion, an offshoot of Islam incorporating elements of other faiths.Druse are known to support and be loyal to the countries in which they live, but are flexible in whom they support when they sense power may be shifting.Many Druse, like other minorities in Syria – such as Christians and President Bashar Assad’s Alawite sect – are supporters of the Syrian president because they see him as a protector from the more numerous Sunni masses and jihadist groups.“Indeed, the Druse are loyal to the country they are living in – whether in Israel, Lebanon or Syria,” Eyal Zisser, an expert on Syria from the Moshe Dayan Center at Tel Aviv University, told The Jerusalem Post on Tuesday.“A Syrian Druse soldier can serve in the Syrian army and fight an Israeli Druse soldier – they are not fighting against each other, but are serving their respective countries,” he continued.However, since the threat to the Druse in Syria from Islamic State and the Nusra Front became real, Israeli Druse citizens, as well as Syrian Druse who are not citizens of Israel but reside in the Golan Heights, have united in their call for aid and intervention to save their brethren over the border.Those in Lebanon have also voiced their support, demonstrating that ethnic cohesion has become more pressing than national ideology.British sociologist Anthony Smith, in his book The Ethnic Revival, states that “ethnic movements make their claims in virtue of an alleged ‘community of culture,’ in which the members are both united with each other by a shared culture and differentiated from others by the possession of that culture.”For example, in the First Lebanon War, said Zisser, Christians clashed with the local Druse, leading all the rest of the Druse to rally to their defense.In other words, all members of the extended Druse community come together against outside threats.“In this case, there is a threat to the Druse ethnic group, and since this comes from radical Islamists that the world has rallied against, it makes it even easier for the Druse to unite,” said Zisser.“For an ethnic group that has successfully survived for so many years, they know to be loyal to the local ruler,” while at the same time “maintaining ethnic cohesion.”They were able to deal with the Ottoman Empire, the French Mandate, and so on, Zisser added, comparing them to Jews who fought on both sides of the 1982 Falklands War between Argentina and Britain, or for various sides in World War I.Reuters contributed to this report.