Unraveling the Gulf states' reluctance to take in Syrian refugees

None of the six Gulf Cooperation Council states - Saudi Arabia, Oman, United Arab Emirates, Kuwait, Bahrain and Qatar - has signed the UN convention on refugees which has governed international law. 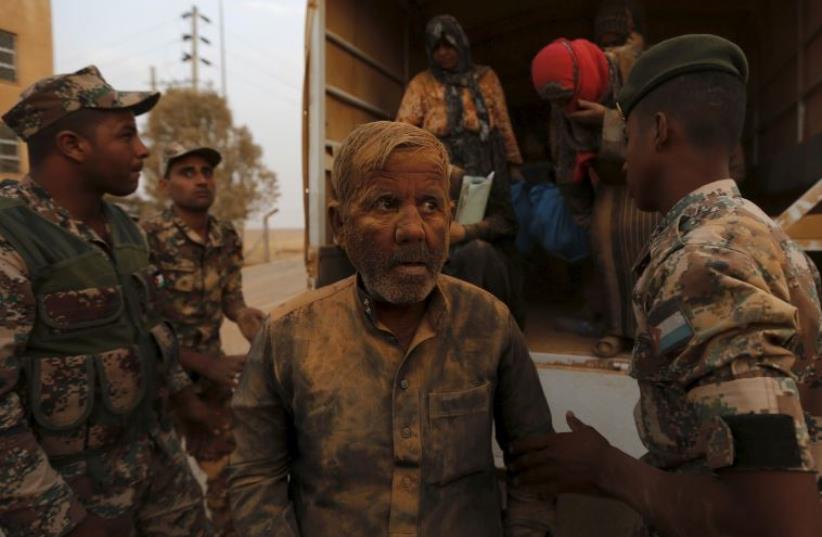 DATE IMPORTED: September 10, 2015 Syrian refugees covered with dust arrive at the Trabeel border, after crossing into Jordanian territory with their families, near the northeastern Jordanian border with Syria, and Iraq, near the town of Ruwaished, east of Amman September 10, 2015
(photo credit: MUHAMMAD HAMED / REUTERS)
Advertisement
DUBAI - Despite withering criticism over their reluctance to host Syria's refugees, the rich Arab Gulf states are unlikely to end their practice of keeping out those who flee the world's trouble spots.None of the six Gulf Cooperation Council states - Saudi Arabia, Oman, United Arab Emirates, Kuwait, Bahrain and Qatar - has signed the UN convention on refugees which has governed international law on asylum since World War Two.The Syrian father of 3-year-old Aylan Kurdi, whose image drowned on a Turkish beach last week helped inspire a wave of global sympathy for refugees making perilous voyages to Europe, blamed Arab countries for failing to take in more Syrians."I want Arab governments - not European countries - to see (what happened to) my children, and because of them to help people," Abdullah Kurdi said last week as he crossed the border back to Syria to bury tiny Aylan, his 5-year-old brother and their mother after they drowned in the Mediterranean.Gulf states say they have in fact taken in hundreds of thousands of Syrians since the civil war there began in 2011, including half a million in Saudi Arabia and 100,000 in the United Arab Emirates - just not as refugees.Like the rest of the expatriates that form a majority in many Gulf States, Syrians have been admitted mainly as temporary guest workers, which generally means they must have jobs lined up before they arrive, or as their family dependents.The Gulf monarchies also say they are big humanitarian aid donors, having contributed hundreds of millions of dollars to relief efforts in the region. But that cuts little ice with an increasingly critical humanitarian community."To me, buying your way out of this is not satisfactory," Peter Sutherland, Special Representative of the UN Secretary-General for Migration and Development told a news briefing in Geneva last week. "And I say that taking refugees is separate from giving money."SECURITY, MONEYThe Gulf states worry about the political, social and economic impact of an influx of refugees, especially fellow Arabs, who might settle permanently and demand broad civil rights that temporary guest workers know not to expect."We're talking about countries whose nationals are in the minority," said Sami al-Faraj, a Kuwaiti security adviser to the GCC. "When it comes to the issue of refugees, we have taken a stand and that is to actually help (other) nations settle refugees."After Arab expatriates became involved in local political movements in the 1950s and 60s, Gulf governments steered their recruitment of foreign workers more towards Asia than the Middle East, said Jane Kinninmont, deputy head of the Middle East and North Africa programme at Britain's Chatham House think tank.Gulf citizens worry that generous social welfare benefits for nationals may come under strain if state money has to be allocated to deal with a massive influx of non-nationals, particularly at a time when budgets are stretched by lower prices for oil exports."Gulf countries are scared about more traffic on the streets, longer waiting periods in free government medical facilities, additional pressure on subsidised goods, and more use of subsidised electricity and water," said Ali al-Baghli, a lawyer and former Kuwaiti parliamentarian and oil minister, who hoped Gulf countries would change policies and accept refugees.Kinninmont of Chatham House said Gulf countries' concerns were surmountable if they were to make a decision to help.

"NOT UNIQUE""None of the Gulf's concerns - about possible security and economic risks - are unique. Other countries also need to ensure their security and provide for the welfare of their citizens. But nearly all of them have signed up to the international conventions on refugee rights," said Kinninmont."They (Gulf countries) could work with European partners to understand how countries who already host refugees manage these risks. So far there is little record of refugees committing acts of terrorism," Kinninmont said.A short-term solution would be to make more visitor visas available for Syrians, she said."They will be more reluctant to change their wider policies towards refugees because of a wider reluctance to extend rights, such as permanent residency, to non-nationals."Abdullah al-Shammari, a former Saudi diplomat, said images of refugees in distress could pressure Gulf states to relax their policies, possibly by giving Syrians preference when applying for jobs and loosening restrictions for visas.But a wider policy reversal is unlikely as long as Gulf states are not signatories to global refugee conventions.