With the help of US jets and special forces, the Syrian Democratic Forces (SDF) alliance is battling the remnants of Islamic State in an enclave near the Iraqi border. 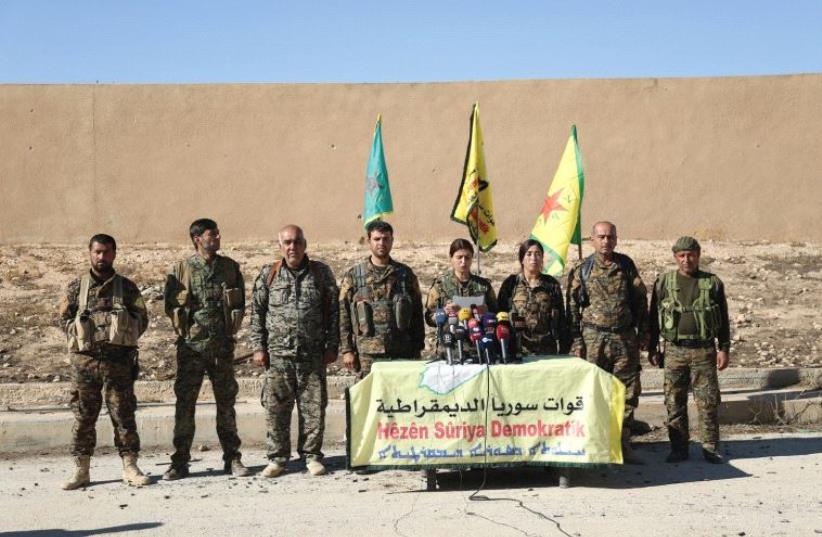 SYRIAN DEMOCRATIC FORCES commanders announce an offensive to take the ISIS-held city of Raqqa last week.
(photo credit: RODI SAID / REUTERS)
Advertisement
BEIRUT - Heavy clashes between Islamic State militants and US-backed forces in eastern Syria killed dozens of civilians and fighters in the past two days, a monitoring group said.With the help of US jets and special forces, the Syrian Democratic Forces (SDF) alliance is battling the remnants of Islamic State in an enclave near the Iraqi border.The SDF restored positions it had lost to attacks in recent days, the Syrian Observatory for Human Rights said. Battles raged on the eastern bank of the Euphrates river on Sunday."The SDF did regain back a lot of territory lost the other day," Colonel Sean Ryan, spokesman for the US-led coalition, told Reuters. "Both sides took casualties."Iraqi security forces are securing the border so no fighters can escape, he added.The SDF, which the Kurdish YPG militia leads, has seized vast territory from the jihadists across northern and eastern Syria, where some 2,000 US troops are stationed.SDF officials were not immediately available for comment.Islamic State's self-proclaimed caliphate has crumbled after different offensives in Iraq and Syria, but its fighters still operate in the desert border region and mount attacks.Syrian state news agency SANA said coalition warplanes killed 14 people "in a new massacre" in al-Shaafa village. Air strikes had killed 20 other people, including nine children, in the nearby town of Hajin, it said a day earlier.The US-led coalition says it seeks to avoid civilian casualties and investigates any allegations. Colonel Ryan said on Saturday that strikes were limited and had not affected civilians.The UK-based Syrian Observatory for Human Rights put the death toll at 31 civilians in the past two days, as well as 50 Islamic State and 79 SDF combatants.Islamic State released a graphic video overnight showing its militants beheading a hostage and threatening the families of SDF fighters.Its media outlet Amaq on Saturday said the jihadists staged attacks on two fronts, killing dozens of Kurdish milita fighters and taking 30 others hostage.Separately, in the northwest, more than 100 people were wounded in a suspected toxic gas attack in Aleppo city, which Damascus and Moscow blamed on rebel factions.