US Navy ship targeted in failed missile attack from Yemen

The failed missile attack on the USS Mason began around 7 p.m. local time, when the ship detected two inbound missiles over a 60-minute period in the Red Sea off Yemen's coast, the US military said. 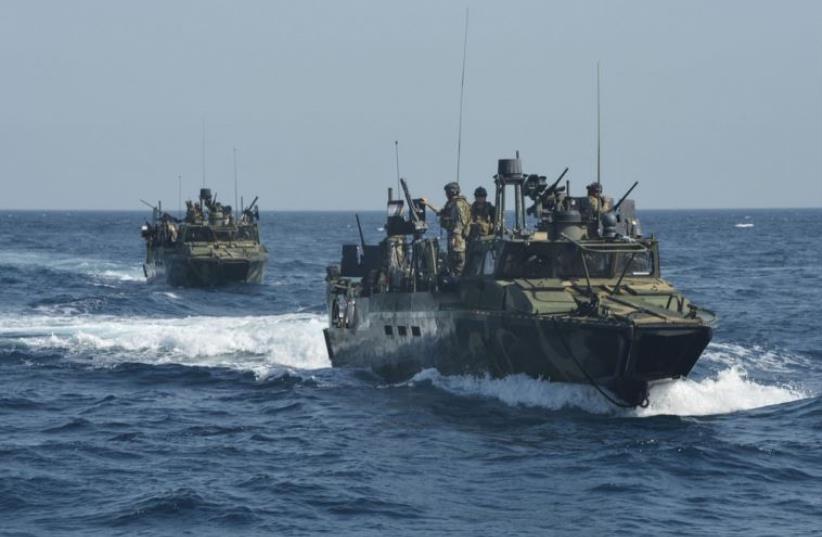 Riverine command boats are seen in this 2013 handout photo provided by the US Navy
(photo credit: REUTERS)
Advertisement
WASHINGTON - A US Navy guided missile destroyer was targeted on Sunday in a failed missile attack from territory in Yemen controlled by Iran-aligned Houthi rebels, a US military spokesman told Reuters, saying neither of the two missiles hit the ship.The attempted strike on the USS Mason, which was first reported by Reuters, came just a week after a United Arab Emirates vessel came under attack from Houthis and suggests growing risks to the US military from Yemen's conflict.The US government, which has become increasingly vocal about civilian casualties in the war, this weekend announced a review of its support to a Saudi Arabia-led coalition battling the Houthis after a strike on mourners in the capital Sanaa that killed up to 140 people.The failed missile attack on the USS Mason began around 7 p.m. local time, when the ship detected two inbound missiles over a 60-minute period in the Red Sea off Yemen's coast, the US military said."Both missiles impacted the water before reaching the ship," Pentagon spokesman Captain Jeff Davis said. "There were no injuries to our sailors and no damage to the ship."Saudi Arabia and the United States blame Shi'ite Iran for supplying weapons to the Houthis. Tehran views the Houthis, who are from a Shi'ite sect, as the legitimate authority in Yemen but denies it supplies them with weapons.A US defense official, speaking on condition of anonymity, said the first missile triggered counter-measures from the USS Mason. It was not immediately clear whether those defenses may have helped prevent a direct hit on the ship.The USS Mason did not return fire, the official said, adding that the incident took place just north of the Bab al-Mandab strait off Yemen's southern coast.Last week's attack on the UAE vessel also took place around the Bab al-Mandab strait, in what the UAE branded an "act of terrorism."In 2013, more than 3.4 million barrels of oil passed through the 12 mile-wide Bab al-Mandab each day, the US Energy Information Administration says.It was unclear what actions the US military might take, but Davis stressed a commitment to defend freedom of navigation and protect US forces."We will continue to take all necessary steps to ensure the safety of our ships and our servicemembers," he said.The attack also came the same day that Yemen's powerful former president, Ali Abdullah Saleh, a key Houthi ally, called for an escalation of attacks against Saudi Arabia, demanding "battle readiness at the fronts on the (Saudi) border".An estimated 10,000 people have been killed in Yemen's war. The United Nations blames Saudi-led coalition strikes for 60 percent of some 3,800 civilian deaths since they began in March 2015.