US offers millions for information on four ISIS leaders

Rewards of up to $7 million dollars for information on the ISIS leaders comes on the heels of a failed terror attack in Texas. 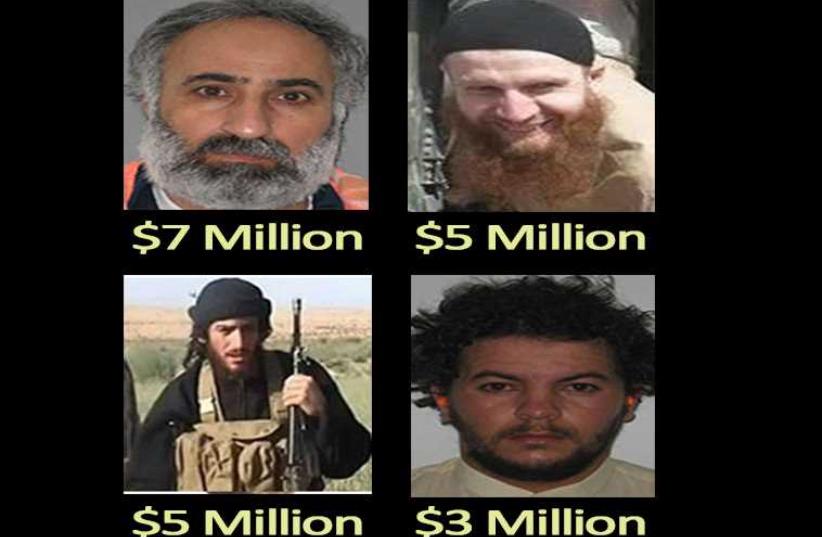 US offering millions in exchange for information leading to the ISIS leaders‏
(photo credit: STATE DEPARTMENT)
Advertisement
The US State Department said on Tuesday (May 5) it was offering rewards of up to $7 million for information on four leaders of Islamic State - Abd al-Rahman Mustafa al-Qaduli , Abu Mohammed al-Adnani, Tarkhan Tayumurazovich Batirashvili and Tariq Bin-al-Tahar Bin al Falih al-'Awni al-Harzi.US investigators were looking into a claim by Islamic State that it was behind a failed attack on a Texas exhibit of cartoons of the Prophet Mohammad on Sunday (May 3) in which two gunmen were killed, but officials said on Tuesday (May 5) they doubted the militant group's direct involvement.The Syria- and Iraq-based Islamic State said on its official online radio station that "two soldiers of the caliphate" carried out the attack on Sunday in Garland, a suburb of Dallas.As the US government sought to verify the Islamic State connection, a co-sponsor of the event that was attacked by the two Arizona men said the attempt to disrupt the controversial drawing contest motivated him to hold another one.Robert Spencer, who runs the website Jihad Watch, said that a few days before the cartoon contest, the FBI showed him two Twitter messages that threatened violence at the event.The White House said it was too early to tell whether the two gunmen were tied to Islamic State, which has taken control of parts of Iraq and Syria in the past year and has sympathizers in several countries.US officials said separately that investigators did not know whether the group was opportunistically claiming credit when it had little or no direct or indirect involvement.One US official said investigators believed it was possible, if not likely, that IS played an "inspirational" rather than "operational" role in the attack.That would mean the gunmen may have immersed themselves in items posted online by Islamic State and other groups such as al Qaeda in the Arabian Peninsula intended to incite violence but that the group played no role in directing an attack on the Texas event.US investigators were going through the shooters' computers and communications devices, officials said.The shooting in Garland, an ethnic melting pot city of nearly a quarter million people, was an echo of attacks or threats in other Western countries against images depicting the Prophet Mohammad.