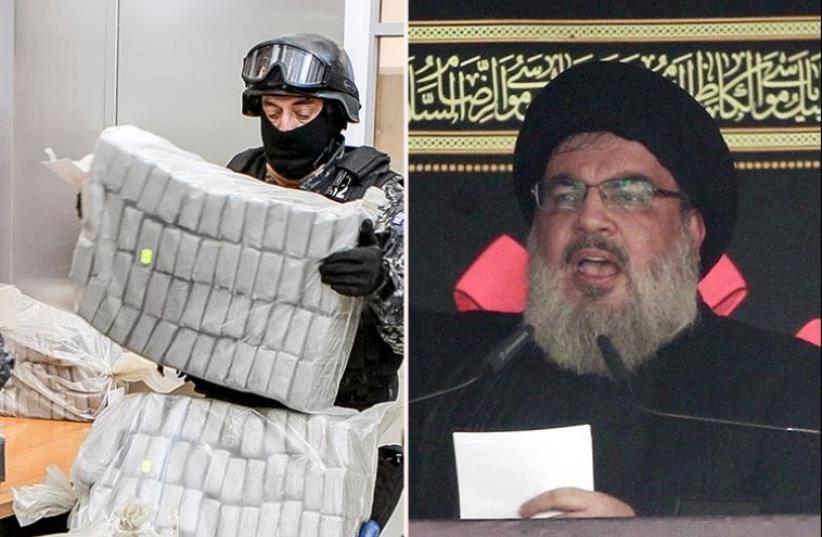 Hezbollah drug trafficking
(photo credit: REUTERS,ILLUSTRATIVE: REUTERS)
Advertisement
US Drug Enforcement Administration officials have arrested an undisclosed number of Hezbollah members on suspicion of running a global drug trafficking network that raised millions of dollars to buy weapons for the Syrian war.The DEA said Monday that law enforcement agencies from seven countries took part in the year-long investigation known as “Project Cassandra,” which they say highlighted how a network founded years earlier by deceased Hezbollah leader Imad Mugniyah collaborated with South American drug cartels to move large quantities of cocaine to the United States and Europe.“These drug trafficking and money laundering schemes utilized by the Business Affairs Component [of Hezbollah] provide a revenue and weapons stream for an international terrorist organization responsible for devastating terror attacks around the world,” DEA acting deputy administrator Jack Riley said in the statement.The most significant arrest was that of Mohamad Noureddine, a Lebanese national the DEA said laundered money for Hezbollah who has been classified as a “specially designated global terrorist” by the US government.The investigation began in February 2015 after European law enforcement agencies began targeting the network on the Continent, eventually uncovering “an intricate network of money couriers who collect and transport millions of euros in drug proceeds from Europe to the Middle East,” according to a DEA statement released Monday.The money was then sent to Colombia to pay drug traffickers using the “Hawala” method of transferring money with a large portion of the drug process transiting through Lebanon and a significant amount going to terrorist groups including Hezbollah, the DEA said.The network also allegedly laundered the funds by way of the “Black Market Peso Exchange,” the system used by Colombia drug cartels to clean drug money by “selling” dollars to South Americans with pesos they want to convert so they can purchase goods in the United States.The DEA did not say how many suspects were arrested, in which countries they were caught, or how much drugs or money were seized, if any.According to the DEA, Hezbollah has formed ties to a number of South American drug cartels through the network, including with “La Oficina de Envigado,” which began as a former branch of the Medellin cartel.Last week, the US Treasury Department sanctioned Noureddine and Lebanese national Hamdi Zaher for allegedly laundering money for Hezbollah. They are among more than 100 people and companies that have been sanctioned by the US Treasury for ties to the terrorist organization.The case is the latest in a series of drug trafficking and money laundering investigations against Hezbollah. In October 2008, US and Colombian authorities arrested more than three dozen suspects accused of forming an alliance between South American drug traffickers and Hezbollah, with a large share of the profits being funneled to the Shi’ite terrorist group.According to a 2012 article by the Washington Institute, Hezbollah’s expansion into the South American narcotics industry began in the early 1980s and grew over the following decades, drawing on support from Lebanese Diaspora communities in South America.The group has also used ties with Lebanese communities in West Africa – a major transit point for cocaine trafficked from South America to Europe.The Washington Institute report quoted Michael Braun, a former head of the DEA’s Special Operations division as telling a congressional hearing on drug trafficking in West Africa in June 2009 that “operatives from al-Qaida, Hezbollah and Hamas – and perhaps others – are rubbing shoulders with Latin American and Mexican drug cartels, including the FARC, in west African countries and other places on the continent.”