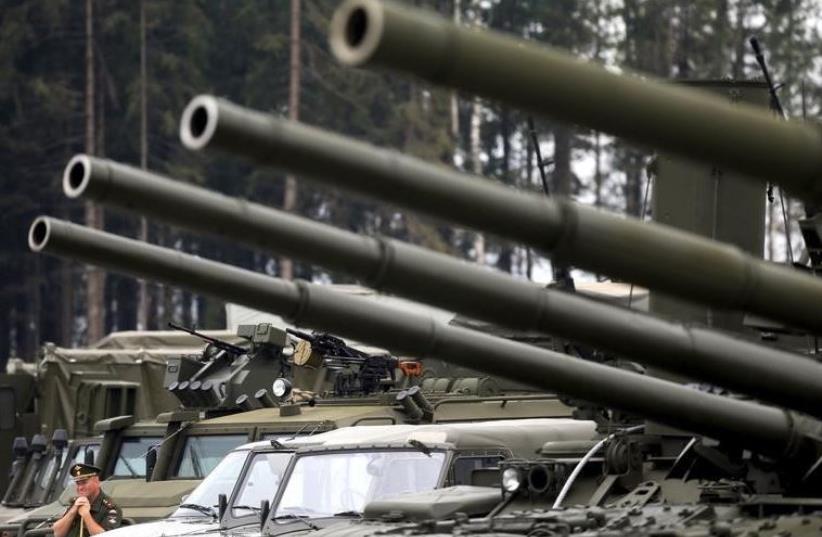 Russian tanks and armored vehicles [Illustrative]
(photo credit: REUTERS)
Advertisement
WASHINGTON - Russia has positioned about a half dozen tanks at a Syrian airfield at the center of a military buildup, two US officials said on Tuesday, adding the intentions of Moscow's latest deployment of heavy military equipment to Syria was unclear.One of the US officials said seven Russian T-90 tanks were observed at the airfield near Latakia, a stronghold of Syrian President Bashar Assad.The two US officials said Russia had also positioned artillery, which they said appeared to be arrayed defensively to protect Russian personnel stationed there.The Pentagon said Russia's latest reported movements at the airfield suggest plans to establish a forward air operating base, generally describing Russian movement of "people and things" in Syria but declining to offer specifics on US intelligence."We have seen movement of people and things that would indicate that they plan to use that base there, south of Latakia, as a forward air operating base," said Pentagon spokesman Captain Jeff Davis.However, the Syrian ambassador to Moscow, Riad Haddad, said on Monday that talk of a Russian troop presence on the ground in Syria is "a lie," ITAR-TASS news agency reported."We have been cooperating with Russia for 30-40 years in various areas, including the military sphere. Yes, we receive arms, military equipment, all this is done in line with agreements sealed between our countries," he was quoted as saying."But the talk of your (Russian) troop presence on the Syrian territory is a lie spread by Western countries, the United States."Reuters has previously reported that Russia had deployed about 200 naval infantry forces to the airfield. Moscow has also been sending about two cargo flights a day to the airfield over the past week, US officials say.Moscow has come under increased international pressure in recent days to explain what Washington and Gulf states say is a significant Russian military build-up in Syria, where the Kremlin has been supporting Assad in a four-and-a-half-year war.Russia has said it will continue with military supplies to Syria and that its assistance to the Syrian army is in line with international law.The United States is using Syrian air space to lead a campaign of air strikes against Islamic State, and a greater Russian presence raises the prospect of the Cold War superpower foes encountering each other on the battlefield.Both Moscow and Washington say their enemy is Islamic State, whose Islamist fighters control large parts of Syria and Iraq. But Russia supports the government of Assad in Syria, while the United States says his presence makes the situation worse.The Syrian civil war, in which about 250,000 people have died, has caused nearly half Syria's pre-war 23 million strong population to flee, with many thousands attempting to reach Europe.