US seeks regional path to Syria peace at Lausanne talks

It was the first meeting between Kerry and Lavrov since the collapse of a second attempted ceasefire in September. 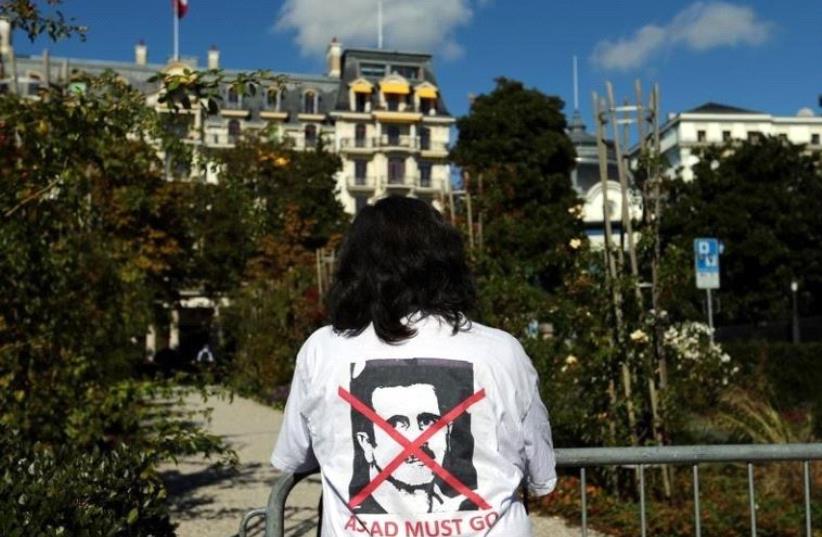 A woman stands outside the Beau-Rivage Palace ahead of Syria talks in Lausanne, Switzerland, October 15, 2016. The T-shirt reads: "Assad must go".
(photo credit: REUTERS)
Advertisement
LAUSANNE, Switzerland, Oct 15 (Reuters) - Syria talks convened by US Secretary of State John Kerry in the Swiss city of Lausanne ended on Saturday evening after more than four hours without any joint ministerial statement from the nine countries.Kerry was seeking a new path to peace after failing to secure a ceasefire in direct talks with Russia amid mounting international outrage over the Russian and Syrian bombardment of rebel-held eastern Aleppo.Kerry hosted Russian Foreign Minister Sergei Lavrov and seven foreign ministers from the region - from Iran, Iraq, Saudi Arabia, Turkey, Qatar, Jordan and Egypt - weeks after the collapse of a painstakingly crafted US-Russian ceasefire plan that many saw as the last hope for peace this year.Lavrov, who had said he had "no special expectations" for Saturday's meeting, later told Russian news agencies that the countries had agreed to continue contacts in the near future aimed at ending the Syria crisis. The parties had discussed several "interesting ideas", he said without elaboration"This is going to be, as it has been now for several years, a very difficult process," a senior US official said before the talks began.Europe was not represented at the meeting, held in a luxury hotel on Lake Geneva. But France's Foreign Ministry confirmed that foreign ministers of like-minded nations planned to meet to discuss Syria in London on Sunday.Since the breakdown of US-Russia cooperation, long the backbone of efforts to end the war in Syria, US officials have worked on a number of ideas, and although no breakthrough was expected, the regional format could be the basis of a new process, the US official said.But a former Western envoy in Syria told Reuters. "I don't understand (why) the Americans are asking the Russians to talk again. They have made zero concessions. Do the Americans believe Moscow was shaken by the break-off last week and will change behaviour now?"Separately, a Western diplomat in Lausanne said the meeting appeared ill-prepared and vague in its goals, and the list of invitees clarified only at the last moment."If it is to reach an agreement on Aleppo, countries have to make commitments: Russia to stop bombing, Iran to withdraw its militia on the ground supporting Damascus," the diplomat told Reuters as the talks were under way."If this format is to be credible, Kerry has to come out of the talks tonight saying we got something for Aleppo. A ceasefire would be credible."Earlier, Kerry met separately with his Saudi counterpart Adel al-Jubeir and with Lavrov to discuss the logistics of the meeting.It was the first meeting between Kerry and Lavrov since the collapse of a second attempted ceasefire in September.The US was expected to once again push Russia to agree to a ceasefire in Aleppo, and Russia was seen as insisting on separating moderate opposition groups from those it considers terrorists.ACCUSATIONSPressure is rising for a halt to a ferocious, three-week-old Syrian government offensive to capture the eastern zone of the city of Aleppo, where the United Nations says 275,000 civilians still live and 8,000 rebels are holding out against Syrian, Russian and Iranian-backed forces.Western powers have accused Russia and Syria of committing atrocities by bombing hospitals, killing civilians and preventing medical evacuations, as well as targeting an aid convoy with the loss of around 20 lives.Syria and Russia counter that they are only targeting militants in Aleppo and accuse the United States of breaking the ceasefire by bombing scores of Syrian troops fighting Islamic State insurgents, over which the United States has expressed regret.A senior rebel commander said on Friday that Syrian government forces would never be able to capture Aleppo's eastern sector, but a military source said the operation was going as planned.The United Nations has said food, fuel and medicine are running out in eastern Aleppo and there will be no rations to distribute from the start of next month.