US warns its citizens of possible kidnappings, terror attacks in Turkey 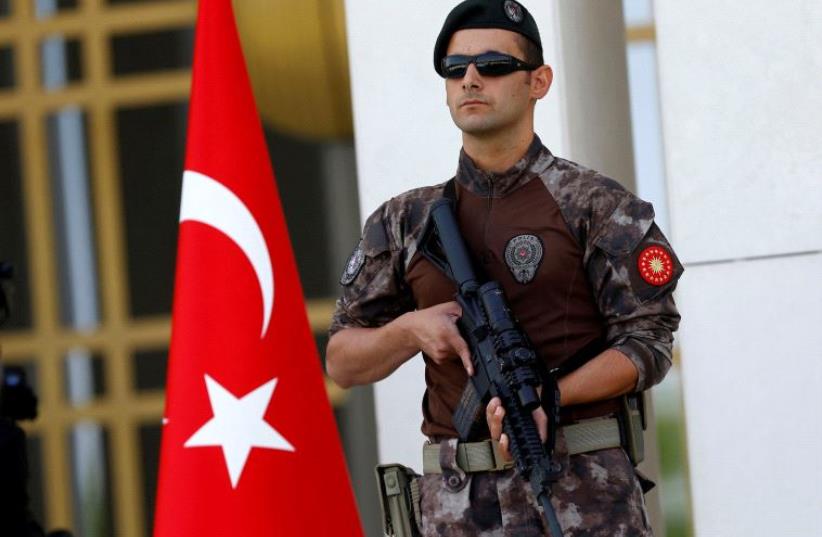 A Turkish special forces police officer guards the entrance of the Presidential Palace in Ankara, Turkey, August 5, 2016
(photo credit: REUTERS)
Advertisement
The US State Department warned American citizens early on Sunday of increased terrorist threats in Turkey. In the updated travel warning, the State Department urged US citizens to avoid travel to Turkey's volatile southeast region near the Syrian border, while reminding citizens that risks remain for travel throughout the country."The Department continues to monitor the effects of the ongoing State of Emergency; recent terrorist incidents in Ankara, Istanbul, Gaziantep, and throughout the Southeast; recurring threats; visible increases in police or military activities; and the potential for restrictions on movement as they relate to the safety and well-being of US citizens in Turkey," read the advisory that replaced an August 29 warning. The advisory also warned that foreigners and US tourist have recently been targeted by terrorist groups operating in Turkey. "Most recently, extremists have threatened to kidnap and assassinate Westerners and US citizens," read the government notice. "US citizens are reminded to review personal security plans, monitor local news for breaking events, and remain vigilant at all times."The State Department announced that the updated travel warning came as it was decided to end an authorization made after the Turkey's failed coup in July that permitted the voluntary departure of family members of employees at the US Embassy in Ankara and the US Consulate General in Istanbul. A child suicide bomber in August killed 51 people at a wedding party in the southeastern Turkish city of Gaziantep, in one of the deadliest attack in the country struggling to contain spillover from neighboring Syria's war.In June, three suspected Islamic State suicide bombers opened fire and blew themselves up in Istanbul's main airport, killing 41 people and wounding 239.Five Saudis and two Iraqis were among the dead, a Turkish official said. Citizens from China, Jordan, Tunisia, Uzbekistan, Iran and Ukraine were also among the 13 foreigners killed at Europe's third-busiest airport .In March, a suicide bomber killed four people and wounded 36 others, including 11 Israelis in a busy shopping district in central Istanbul.A suicide car bombing in the capital Ankara that month killed 37 people. A similar bombing in Ankara earlier in the year killed 29 people. A Kurdish militant group has claimed responsibility for both of those bombings.In January, a suicide bomber killed around 10 people, most of them German tourists, in Istanbul's historic heart, an attack the government blamed on Islamic State.Reuters contributed to this article.