In an interview with Al Jazeera, the renowned MIT linguist responded to Erdogan’s criticism of him and other intellectuals for their support of Kurdish separatists in Turkey. 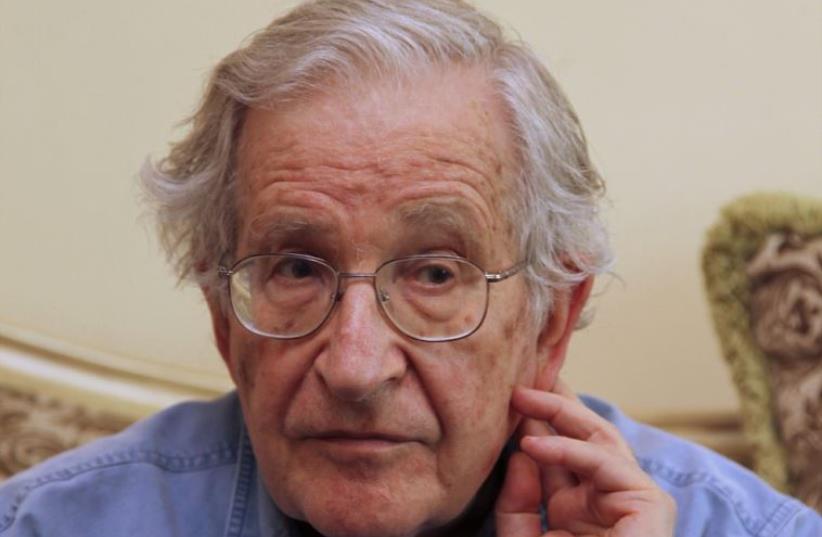 Renowned linguist Noam Chomsky
(photo credit: REUTERS)
Advertisement
Noam Chomsky, the American Jewish far-left intellectual, lashed out at Turkish President Recep Tayyip Erdogan on Friday, calling him a “murderer” for his government’s “terrorist” war against the Kurds.In an interview with Al Jazeera, the renowned MIT linguist responded to Erdogan’s criticism of him and other intellectuals for their support of Kurdish separatists in Turkey.Last week, Turkish security forces briefly detained 27 academics accused of terrorist propaganda over a declaration that criticized military action in the largely Kurdish southeast and urged an end to curfews.Erdogan denounced the more than 1,000 signatories of the document, who included Chomsky, as "dark, nefarious and brutal" in a speech after Friday prayers.
In a more ironic tone, he said those who did not want to do politics in parliament "should go dig trenches or go to the mountains" - a reference to the tactics and hideouts of the Kurdish militant group PKK.The Turkish opposition and the US ambassador to Turkey criticized prosecutors' actions in ordering investigations and home searches of academics across the country after Erdogan criticized the signatories in a speech on Thursday.The declaration was inspired by clashes between government forces and the PKK since a ceasefire broke down in July. The military has locked down entire districts and pounded PKK outposts in residential areas, but denies accusations that its actions have endangered and killed civilians.The majority of Friday morning's detentions were in the western industrial province of Kocaeli, close to Istanbul and all had been released by the evening, local media reported. The Kocaeli prosecutor's office had no comment.The declaration, published on Monday, accused the government of heavy-handedness in its efforts to weed out militants, who have increasingly brought their fight out of the mountains and into the towns, creating a major headache for security forces."The right to life, liberty, and security, and in particular the prohibition of torture and ill-treatment protected by the constitution and international conventions have been violated," the declaration read."We demand that the state abandon its deliberate massacre."More than 2,000 lawyers signed and published online a pledge to offer free legal assistance to the academics."The declaration does not praise or call for hate or committing crimes," said one law professor, asking not to be named for fear he himself would be prosecuted.The document has garnered support from hundreds of academics around the world, but incensed nationalists inside Turkey. The PKK, fighting since 1984 firstly for an independent Kurdistan and now for Kurdish autonomy, is considered a terrorist organization by the United States and the EU as well as Turkey.Turkey's leading opposition party, the CHP, described the detentions as "totally lawless."Turkey regularly performs badly in surveys on press freedom and freedom of speech and has been heavily criticized by its western and European partners.