Turkey vows to take "all measures" should the referendum threaten their national security.

Voters head to the polls in an independence referendum in the Kurdistan Region of Iraq, ignoring the threats and fears of further instability, September 25, 2017. (Reuters)
Advertisement
ERBIL, Iraq - Voting started on Monday in an independence referendum organized by the Kurdistan Regional Government (KRG) in northern Iraq, ignoring the threats of the Kurds' neighbors and fears of further instability and violence across the Middle East.Polling stations opened their doors at 8:00 a.m. (0500 GMT) and should close at 6:00 p.m. The final results should be announced within 72 hours.The vote, expected to deliver a comfortable "yes" for independence, is not binding and is meant to give Massoud Barzani's KRG a mandate to negotiate secession of the oil producing region with Baghdad and neighboring states. 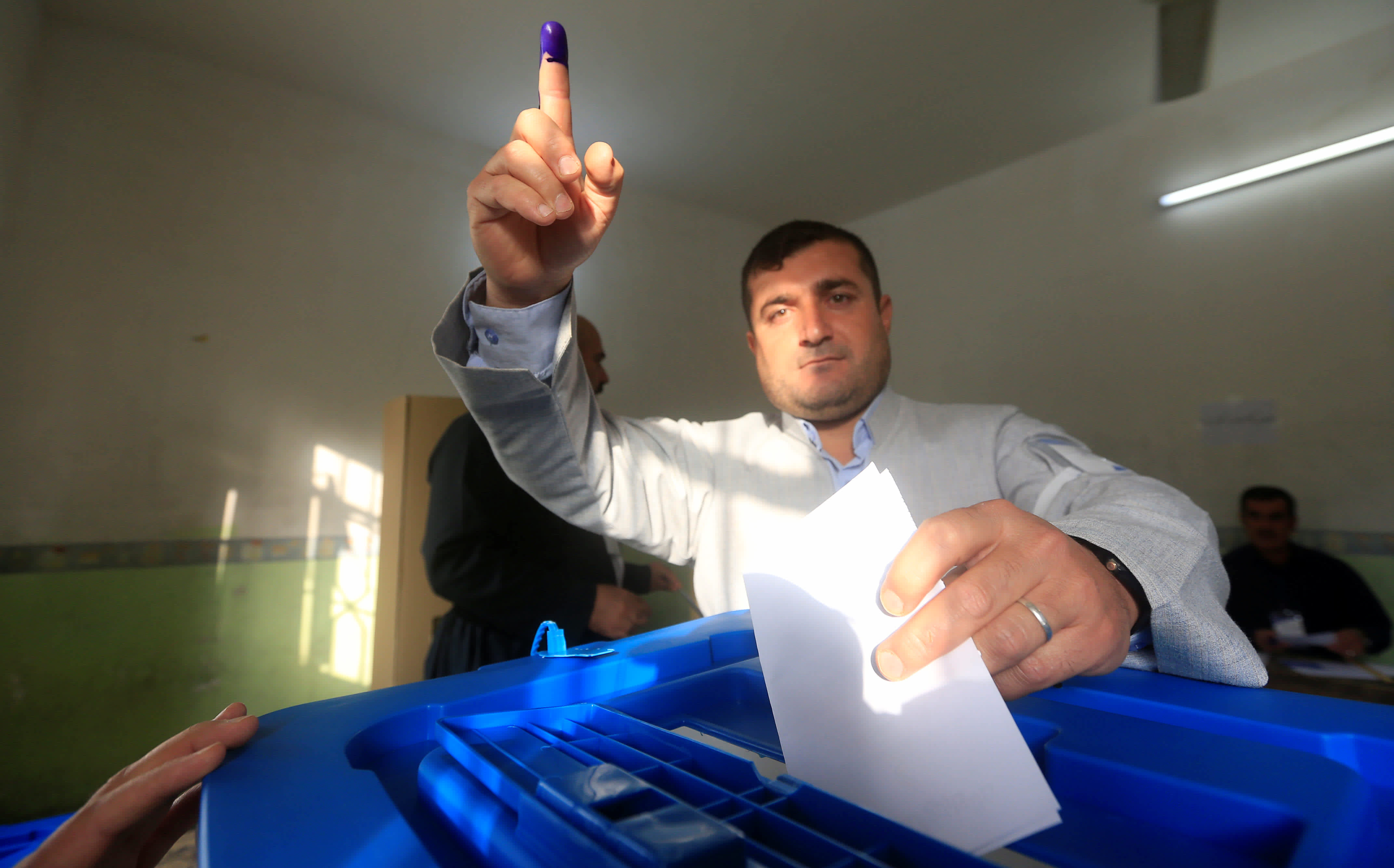 A man casts his vote during Kurds independence referendum in Halabja, Iraq September 25, 2017. (Reuters)"We have been waiting 100 years for this day," said Rizgar, standing in a queue of men waiting to cast a ballot in a school in Erbil, the KRG capital."We want to have a state, with God's help. Today is a celebration for all Kurds. God willing, we will say yes, yes to dear Kurdistan."The voting is open to all registered residents, Kurds and non-Kurds, in the Kurdish-held areas in northern Iraq aged 18 or over, according to the referendum commission.The commission estimates the number of eligible voters at 5.2 million, including those living abroad and who started casting electronic ballots two days ago.Voters should tick yes or no on the ballot paper asking them just one question in Kurdish, Turkish, Arabic and Assyrian: "do you want the Kurdistan Region and Kurdistani areas outside the (Kurdistan) Region to become an independent country?"
The referendum is held despite intense international pressure on Barzani to call it off, amid fears that it would spark fresh conflicts with Baghdad and with Iraq's powerful neighbors, Iran and Turkey.Iran declared a ban on direct flights to and from Kurdistan on Sunday, while Baghdad asked foreign to stop direct oil trading with Kurdistan and demanded that the KRG hands over control of its international airports and border posts with Iran, Turkey and Syria."We have seen worse, we have seen injustice, we have seen killings and blockades," said Talat, waiting to cast a vote in Erbil. "God willing, we will become like the other peoples of the world. We will have freedom and have a state."Turkey threatened retaliation but has kept the Kurdish oil export pipeline that crosses its territory open.Ankara warned that it would take "all measures" under international law if the Iraqi Kurdish independence referendum generates threats to Turkey's national security, the Turkish Foreign Ministry said.In a written statement it said it did not recognize the referendum and would view its outcome as null and void, adding that the Iraqi Kurdish government was threatening the peace and stability of Iraq and the whole region.
In a separate travel warning, the ministry said it strongly recommended that Turkish citizens in the Iraqi Kurdish provinces of Dohuk, Erbil and Sulaimaniya should leave as soon as possible if they are not obliged to stay. Tehran and Ankara fear the spread of separatism to their own Kurds. Iran also supports Shi'ite groups who have been ruling or holding key security and government positions in Iraq since the US-led invasion which toppled Saddam Hussein in 2003.The Iraqi Kurds say the vote acknowledges their crucial contribution in confronting Islamic State after it overwhelmed the Iraqi army in 2014 and seized control of a third of Iraq.The Kurds are the largest ethnic group left stateless when Britain and France, the colonial powers which won World War One, carved up the Ottoman empire. The region's roughly 30 million ethnic Kurds were left scattered, mainly over four countries: Iraq, Iran, Turkey and Syria.All of them suffered persecution and were often denied the right to speak their language. Those in Iraq were uprooted under Saddam Hussein's regime and suffered an attack using chemical weapons. Syria is embroiled in a devastating civil war and its Kurds are pressing ahead with their own self-determination.