'Assad regime lied about disposing of chemical weapons in Syria'

"This is a pretty strong indication they have been lying about what they did with sarin," one diplomatic source said. 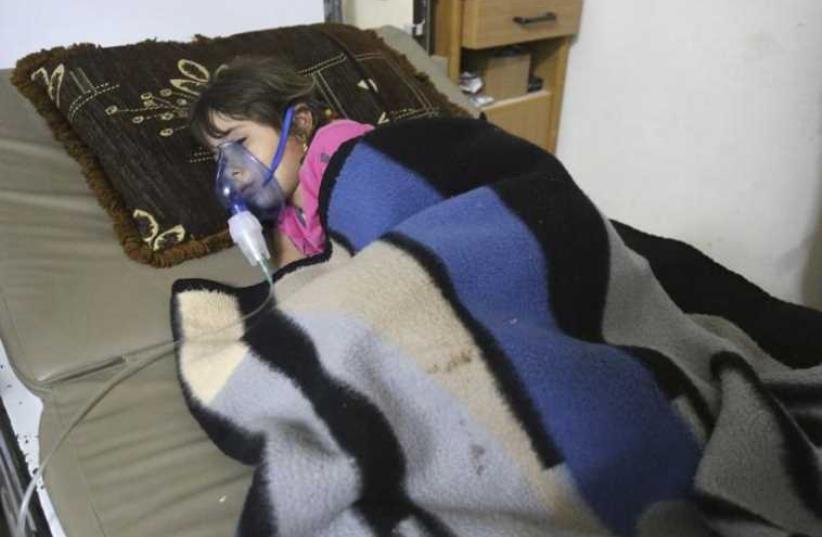 A girl, affected by what activists say was a gas attack, receives treatment inside a makeshift hospital in Kfar Zeita village in the central province of Hama
(photo credit: REUTERS)
Advertisement
International inspectors have found traces of sarin and VX nerve agent at a military research site in Syria that had not been declared to the global chemical weapons watchdog, diplomatic sources said on Friday.Samples taken by experts from the Organisation for the Prohibition and Chemical Weapons (OPCW) in December and January tested positive for chemical precursors needed to make the toxic agents, the sources told Reuters on the condition of anonymity because the information is confidential."This is a pretty strong indication they have been lying about what they did with sarin," one diplomatic source said. "They have so far been unable to give a satisfactory explanation about this finding."In 2013, the United States threatened military intervention against Syria's government after sarin gas attacks in August of that year killed hundreds of residents in Ghouta, a rebel-controlled suburb of the Syrian capital Damascus.But the Damascus government forestalled foreign intervention by agreeing to a US- and Russian-brokered deal under which it joined the OPCW, admitting to having a chemicals weapons programme and promising to eliminate it.The government of President Bashar Assad last year handed over 1,300 tonnes of chemical arms to a joint UN-OPCW mission for destruction. But Damascus has denied using sarin or any chemical weapons in battle during Syria's continuing civil war.The diplomatic sources said the sarin and VX nerve samples were taken from the Scientific Studies and Research Centre, a government agency where Western intelligence agencies say Syria developed biological and chemical weapons.Asked about the diplomats' account, OPCW spokesman Peter Sawczak said: "Obviously we are working to clarify Syria's declaration. I cannot discuss any details of that process, but in due course the assessment team will issue a report."An OPCW fact-finding mission has been investigating allegations of dozens of recent chlorine gas attacks in Syrian villages but is being refused access to the sites by the Assad government, the diplomatic sources said.The finding of VX and sarin supports assertions by Western governments that Assad withheld some of his stockpile, or did not disclose the full extent of Syria's chemical capability or arsenal to the OPCW, according to diplomats and analysts.OPCW inspectors have been to Syria eight times to verify the accuracy of the details of the chemical weapons program provided in an initial report, but keep returning with more questions than answers, the diplomats said.Under the deal with Washington and Moscow, Syria agreed to permanently and completely destroy its chemical weapons programme and cannot use poison gas in warfare.But the OPCW, which is not mandated to assign blame, said chlorine has been used "systematically and repeatedly" as a weapon in Syria after Damascus handed over its declared toxic stockpile.Syria has begun destroying a dozen chemical weapons production and storage sites, but also last year added several new facilities it had not initially disclosed to the OPCW.The United States wants a team of United Nations investigators to determine who is to blame for the more recent chlorine attacks in a bid to pave the way for UN Security Council action against those responsible."We believe - and it's clear that many Council members agree - that we have got to have a means of establishing who is carrying out these chlorine attacks," Samantha Power, the US ambassador to the United Nations, told reporters on Friday."We hope that we can make progress on a resolution to ensure that there is a mechanism that will not only establish chlorine use, but establish who carried out that use," she said.Power said Washington believes the facts indicate that the Syrian government is responsible.Hamish de Bretton-Gordon, a British expert on biological and chemical weapons, said Syrian government forces appeared to be the only party that could have carried out the Aug. 21, 2013 sarin attacks in Ghouta because they were mounted on a large scale and professionally executed."This unequivocally proves there was sarin in Syria. If the OPCW possesses this evidence, it is absolutely another nail in this coffin," he said.