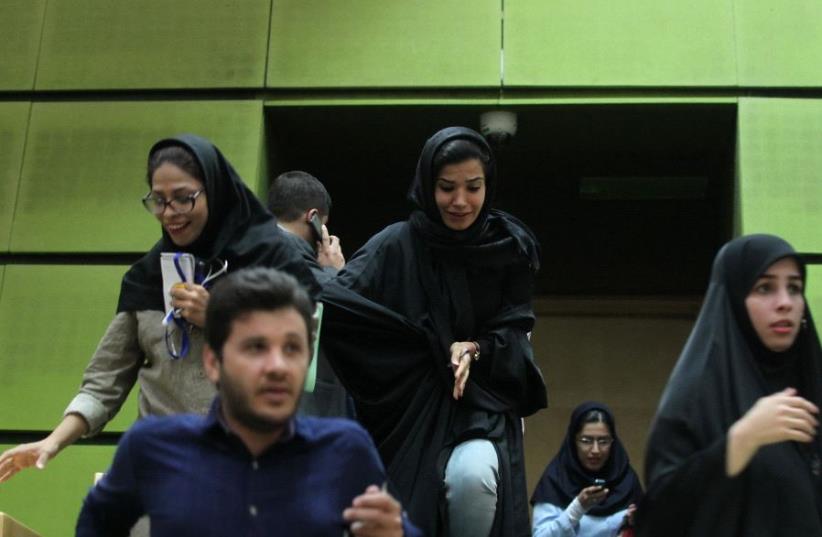 Women are seen inside the parliament during an attack in central Tehran, Iran, June 7, 2017.
(photo credit: TIMA VIA REUTERS)
Advertisement
A whole host of western nations including the United States, Germany and France publicly condemned on Wednesday an attack by suicide bombers and gunmen on the Iranian parliament and the Mausoleum of Ayatollah Khomeini in Tehran that killed at least 12 people.
Attackers raid Iran parliament and mausoleum, up to seven dead (credit: REUTERS)
United Nations Secretary-General Antonio Guterres said the attack was "unjustifiable" and called for the world to work together in order to combat global terrorism. "The Secretary-General hopes those responsible for this unjustifiable violence will be swiftly brought to justice. All countries must work together in fighting terrorism while upholding the universal rights and values that bind the global community," UN spokesman Stephane Dujarric told reporters.Islamic State claimed responsibility and released a video purporting to show gunmen inside the parliament building. It also threatened more attacks.German Foreign Minister Sigmar Gabriel said in statement following the incident: "Once again, unscrupulous criminals have claimed the lives of many innocent people.""Where terror knows no borders, compassion and humanity should also know no bounds."France, which has seen numerous terror attacks across its territory over recent years, strongly denounced the assault in Iran, echoing its German counterpart's statement unequivocally condemning the perpetrators."We strongly condemn the attacks that targeted the Iranian parliament and the Imam Khomenei mausoleum in Tehran," the foreign ministry said in a statement.Neighboring Middle East countries also publicly condemned the ISIS attack, with leaders of the UAE, Jordan and Qatar making public statements.  The US State Department also issued a strong condemnation against the ISIS militants.But US President Donald Trump, after expressing his condolences, said in a tweet that "states that sponsor terrorism risk falling victim to the evil they promote."Iran's foreign minister on swiftly rejected Trump's condolences, calling the president's words "repugnant."Mohammad Javad Zarif wrote on his Twitter account: "Repugnant White House statement .... Iranian people reject such US claims of friendship." Israel has so far kept silent on the matter. An email request sent by The Jerusalem Post to the Prime Minister's Office for comment on the attacks was not immediately answered.    Iran's supreme leader, Ayatollah Ali Khamenei, dismissed Wednesday's bomb and gun attacks in Tehran as mere "fireworks" that would not weaken the country's fight against terrorism, state TV reported."These fireworks have no effect on Iran. They will soon be eliminated ... They are too small to affect the will of the Iranian nation and its officials," he said.Khamenei added that Iran, which is helping Syrian President Bashar Assad fight rebels that include Islamic State fighters, had prevented worse attacks through its foreign policy."If Iran had not confronted terrorists where the core of this sedition is, it would have faced more attacks in Iran," he said.