Some commentators see hypocrisy in the US-led coalition fighting alongside Iraq’s army and the depiction of Russia’s role in Syria. 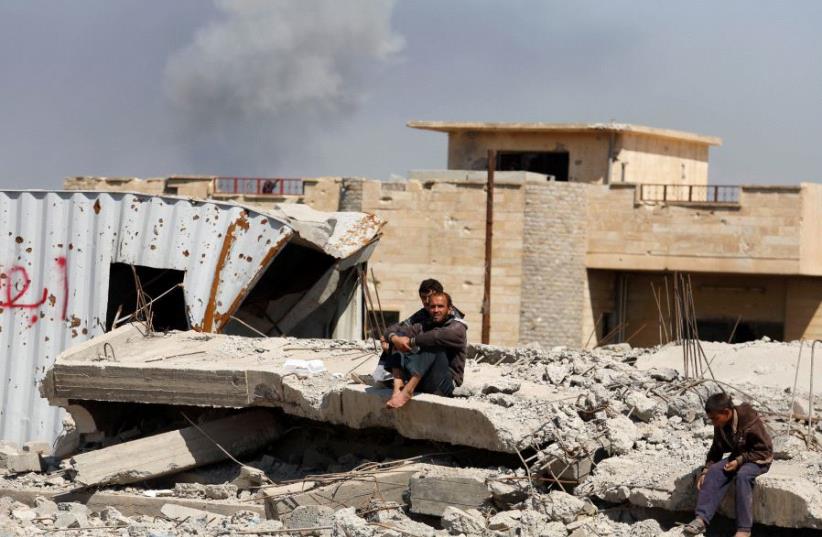 Smoke rises while displaced Iraqis wait to get food supplies as Iraqi forces battle with Islamic State militants, in western Mosul, Iraq March 27, 2017
(photo credit: REUTERS)
Advertisement
Hundreds of civilians have been killed in the battle for Mosul in Iraq. One particular incident that occurred on March 17 left dozens dead.
Mosul presents picture of destruction as Iraqi forces inch towards Old City (credit: REUTERS)
Locals in Mosul’s Jadida neighborhood initially said 200 had been killed. They alleged a coalition air strike had killed the people who were sheltering in a building.As the US-led coalition and its Iraqi allies sort through the rubble to figure out how the tragedy unfolded, they face similar problems Israel had to weigh in Gaza or Lebanon in previous wars. The US has not practiced the “double-tap” procedure Israel used, but the Iraqis did drop hundreds of thousands of leaflets over Mosul, many of them urging people to stay.Some 200,000 have fled, but several hundred thousand are estimated to remain in the pocket under ISIS control.The US Defense Department’s Central Command responded to allegations the civilian deaths had been caused by the coalition on March 25: “Strike data from March 16-23 indicate that, at the request of the Iraqi Security Forces, the coalition struck ISIS fighters and equipment, March 17, in west Mosul at the location corresponding to allegations of civilian casualties.”They stressed that their goal is “zero civilian casualties,” and noted that ISIS was using “human shields” and fighting from schools and civilian neighborhoods. Gen.Joseph Votel released a statement on March 26 saying the incident would be investigated.The coalition is taking it seriously, because the US Defense Department’s Civilian Casualty Assessment said in November 2016 that “as many as 64 civilians” had been killed in one year of fighting ISIS in Iraq and Syria. More were killed in one day in Mosul in March than in all of 2016. Civilians gave The Guardian’s Martin Chulov conflicting information, including that an ISIS sniper was on the roof and that some civilians may have been forced into one of the homes, while others asserted the people sheltered in a basement thinking it was safe.Some commentators see hypocrisy in the US-led coalition fighting alongside Iraq’s army and the depiction of Russia’s role in Syria.“Civilians die (unintentionally) in Mosul. If Russia had done this, it would be denounced (wrongly) as a war crime,” journalist Peter Hitchens tweeted on March 25. The Independent claims civilian deaths have reached a “record high under Donald Trump.” While critics claim the US-led air campaign is similar to Russia’s in Syria, there is little evidence that Russia or its Syrian ally undertook the same painstaking level of analysis of civilian casualties.Adding to the confusion, the Iraqi military told reporters on March 26 that the civilian deaths were caused by an explosive-packed vehicle (VBIED) parked next to the area where the civilians were sheltering. In a statement translated by Kurdish Rudaw media, the Iraqis claimed “a team of military experts” had come to the site after it was liberated by their forces and 61 bodies had been found. “All of [the building’s] walls had been rigged with bombs and there is no hole or sign it was an air target.”The @MosulEye twitter account, which claims to be run by a Mosul resident in the city, said family members were among the casualties.“The explosion didn’t occur [sic] only because of the VBIED, but was a combined explosion of a strike, IFP mortars & VBIED together,” it tweeted. That an air strike or artillery set off a vehicle-bomb could be a plausible explanation for the casualties.ISIS studies the coalition’s rules of engagement. A Yazidi woman who was kidnapped, sold into slavery and raped by ISIS told an interviewer in 2015 that “when they heard an airplane, they would send me out; they thought if they saw me [a woman] they would not bomb.”The 61 bodies pulled from the rubble have wider implications for the battles in Mosul and Raqqa in Syria. The battle for Raqqa, which is about 10% the size of Mosul, will begin in coming weeks. Last year the coalition was very cautious about air strikes in the urban environment, but it wants to increase the tempo of the five-month offensive to re-take Mosul.Now caution will return, which makes it harder for coalition allies on the ground to push through neighborhoods without tactical air support. Meanwhile, ISIS mortars continue to kill civilians in liberated east Mosul, like the four people who were killed on March 26 at a busy market. Iraq and the coalition has to weigh whether a slower campaign in Mosul, with less air and artillery strikes, would lead to more human misery among those left under ISIS than risking more civilian casualties.