Why has no Islamic State member been charged for the 2014 Yazidi genocide?

“My sister-in-law and nephew were abducted by ISIS, they might tell us any minute that your relative was killed or bombed.” 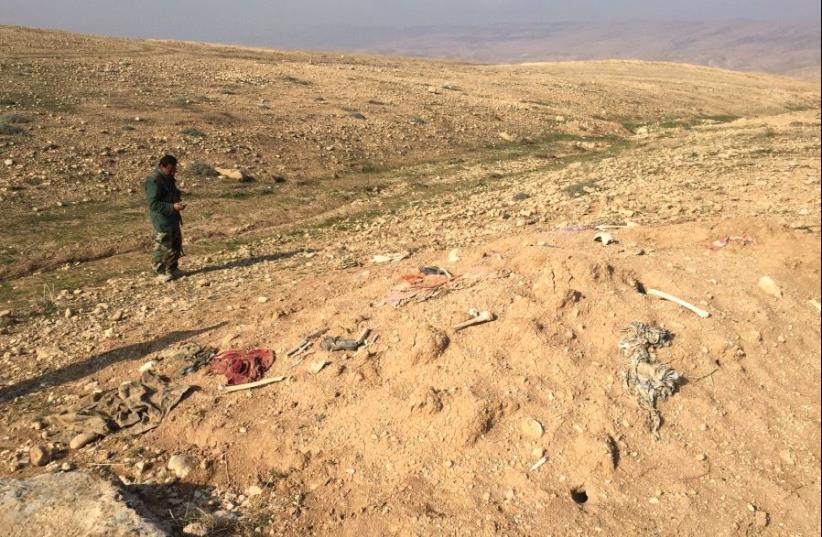 Two photos of mass grave sites near Sinjar in 2015 of Yazidis who were mass murdered by ISIS in the 2014 genocide.
(photo credit: SETH J. FRANTZMAN)
Advertisement
On June 16, 2014, members of Islamic State rolled into Tal Afar in northern Iraq.The city of 200,000 is divided along sectarian lines of Shi’ite and Sunni Muslims and many of its residents were from the Turkmen minority. Sunnis welcomed ISIS with celebratory gunfire, while Shi’ites fled for their lives. Thousands of them walked on dusty roads, their belongings on pickup trucks, passing through nearby Yazidi villages and the town of Sinjar.Nadia Murad, from the village of Kocho near Sinjar, recalls that the sight of the fleeing Shi’ites frightened people. “We heard that Shi’ites had been killed in Tal Afar.” ISIS was broadcasting videos of its mass executions of 1,700 Shi’ite Iraqi cadets at Camp Speicher on June 12.UN Human Rights chief Navi Pillay said that the “systematic series of executions almost certainly amounted to war crimes.” Yet little was done to protect the Yazidis from what came two months later on August 3 when ISIS attacked the district of Sinjar, overrunning Yazidi villages and beginning its campaign of executions and mass abduction of women and children. 400,000 Yazidis fled, but thousands were systematically murdered and more than 5,000 women sold into slavery.One of those who escaped and survived was Murad.“So far we haven’t thought about our life and future. We don’t know what is happening, a lot of family members are still captive,” she says.A week ago she found out her niece was killed and she wears black today in mourning. 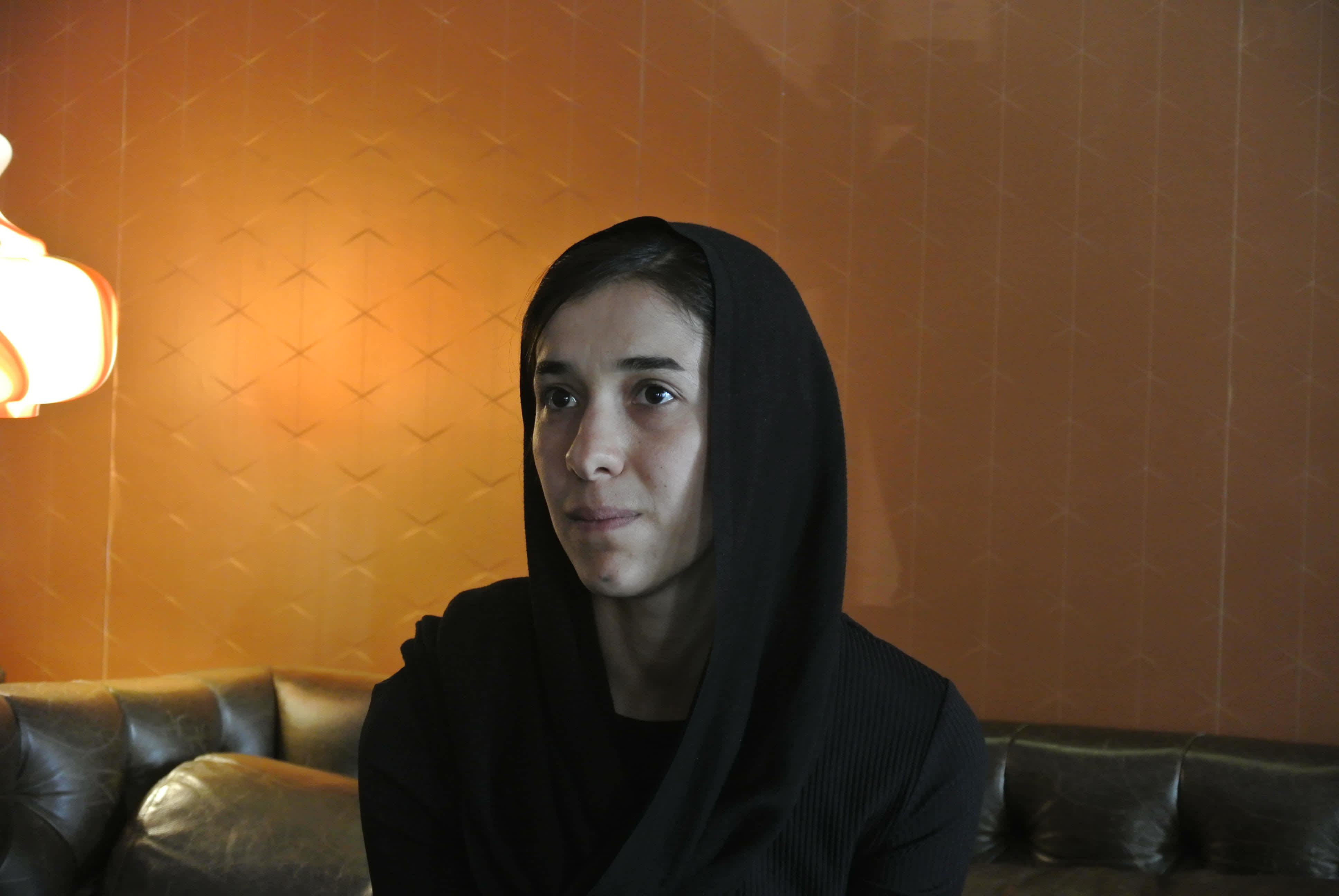 Nadia Murad speaking in Tel Aviv, July 2017. (Credit: Seth J. Frantzman)“My sister-in-law and nephew were abducted by ISIS, they might tell us any minute that your relative was killed or bombed,” she says in an interview.Murad came to Israel with support from the NGO IsraAID to discuss the genocide to discuss the genocide. For two years she has been speaking out about the genocide and victims of ISIS. On June 1 she returned to her former village after it was liberated by members of the Popular Mobilization Units, a mostly Shi’ite paramilitary force of the Iraqi government.“It was my dream the last three years to go back and see that village.” What she found was destruction. Half the houses were blown up, furniture stolen or burned and emptiness. “We knew that a lot of men were killed there and thrown in [mass graves].” Walking through the rubble, she had to be careful of explosives and mines that ISIS often leaves behind to kill people.With hundreds of thousands Yazidis living in displaced person’s camps, she says that they face the decision to migrate and leave Iraq or try to return to their destroyed communities, haunted by scenes of genocide and disappeared loved ones. “We are hoping for justice for them and infrastructure.The main thing is not just being compensated, the main thing is trust. The government authority needs to gain their trust.”One hurdle Yazidis face is that areas they lived in are now controlled by three different forces, the Kurdish Peshmerga, PKK-aligned groups, and the Shi’ite PMU.These groups do not have good relations. In March members of the PKK and Sinjar Resistance Units clashed with a group of Rojava Peshmerga who are deployed north of Sinjar mountain.In April Turkish airstrikes targeted Kurds in Sinjar because Turkey opposes the PKK which it views as a terrorist group. In May as the PMU liberated Yazidi villages such as Tal Qasab, Tal Banat and Kocho from ISIS, some Yazidis joined a PMU-affiliated unit. Thousands of other Yazidis serve alongside Kurdish Peshmerga.But the end result is a continuing lack of security in the area and difficulty for people to return. Current political struggles, such as Iraqi government opposition to a Kurdish independence referendum, also could lead to disputes over areas such as Sinjar. All this means lack of priority put on bringing ISIS members who committed genocide in 2014 to justice.“Starting with the mass graves, there are 44 mass graves and one hundred percent [of the victims in them] are Yazidi victims and we are trying to tell the world that these mass graves need to be documented with forensics before evidence is lost.” She says nothing has been done by the international community to collect evidence.“In terms of the international criminal court, we talked to many countries about bringing ISIS to justice but to be honest, more than 6,000 Yazidis have been killed and [others] abducted and victimized, we haven’t seen even a single case by those members of the ICC brought to justice.” Not one single case. “Not one ISIS member brought to justice for committing crimes against Yazidis.”In August 2016, Iraq executed 36 ISIS members for their role in the Camp Speicher massacre. But the Yazidis are still waiting.The genocide is ongoing as well. “Last estimate two months ago is that there are 2,500-3,200 people still captive by ISIS,” she says. Murad says that up to 1,000 Yazidis might be held by ISIS in Tal Afar, which has not been liberated.In Raqqa there are Yazidi boys who were brainwashed and trained by ISIS to fight.She also tells the story of Yazidi girls who fled during the battle of Mosul and were shot down by ISIS snipers.“One girl told me that 10 girls were trying to run away and were instantly killed by ISIS.”Murad thinks international courts can bring justice and shed light on ISIS ideology.“It is not just my dream to bring them to justice, it is the dream of all Yazidis.”Thousands of ISIS members came from all over the world, and a trial showing them as the criminals they are would kill their ideology, she says.“They could tell of the crimes they have committed and people who wanted to join would change their minds.”