Confusion follows a US Supreme Court decision on Monday that allowed the long-delayed executive order to take effect, but significantly narrowed its scope. 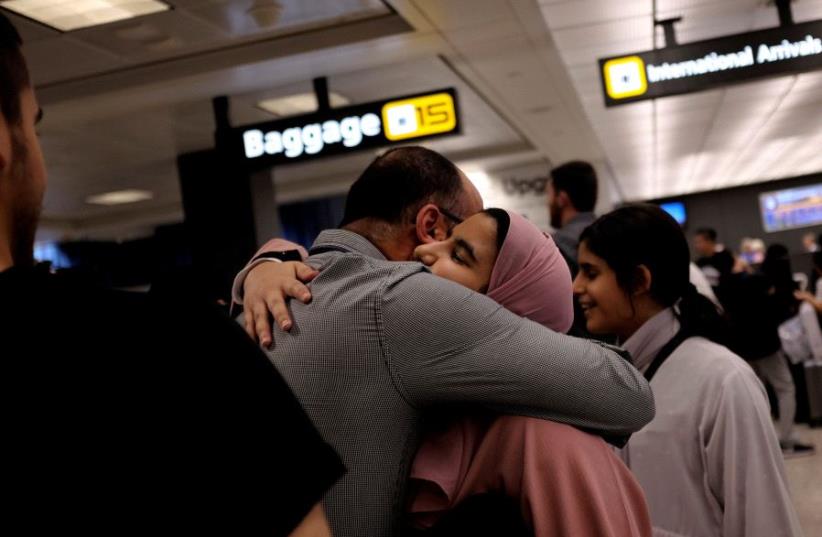 A Saudi family embraces as members arrive at Washington Dulles International Airport after the US Supreme Court granted parts of the Trump administration's emergency request to put its travel ban into effect pending further judicial review, [File June 2017]
(photo credit: REUTERS/JAMES LAWLER DUGGAN)
Advertisement
WASHINGTON/NEW YORK - One day before President Donald Trump's temporary ban on all refugees and travelers from six predominantly Muslim countries is scheduled to take effect, there is still widespread uncertainty about how the administration will implement it.The confusion follows a US Supreme Court decision on Monday that allowed the long-delayed executive order to take effect, but significantly narrowed its scope. It exempted travelers and refugees who have a "bona fide relationship" with a person or entity in the United States.As of Wednesday, the main federal departments and agencies responsible for implementing the ban had not issued official legal guidance to staff in the field or to the public. Among the questions to be resolved are what qualifies as a "bona fide" connection and how pending and future visa and refugee applications will be handled during the period of the ban.Many immigrant and refugee agencies say they need more details in order to prepare their clients for what to expect.Without guidance from the administration, "it’s easy to game out a number of ways this could go off the rails," said Johnathan Smith, legal director of legal advocacy group Muslim Advocates.The US State Department on Tuesday said it was waiting for legal guidance from attorneys at the Department of Justice.U.S. Homeland Security Secretary John Kelly said on Wednesday that he told DHS employees he wants to tread carefully in implementing the order.“I told my folks I didn’t want to come anywhere near close to getting crosswise with the court. I think that’s the right way to be a public servant,” Kelly said, adding that he expects the government will win the case when it is heard this fall.David Lapan, a DHS spokesman, said additional information will be released on Thursday, the day the ban is to start. A Justice Department spokesman did not respond to requests seeking comment.The ban's looming enforcement against nationals of Iran, Libya, Syria, Somalia, Sudan and Yemen stirred anger and confusion in parts of the Middle East on Wednesday, with would-be visitors worried about their travel plans and their futures.Kiyanoush Razaghi, an immigration attorney in Maryland with primarily Iranian clients, said he has received a flurry of messages from Iranians wondering what it would mean for their plans to enter the United States.The Supreme Court specifically mentioned family ties and job or university offers as reasons to exempt someone from the ban, but did not mention such issues as business or professional conference travel.Airlines in the region said they had not received a directive from the United States, and there were few people at the U.S. Consulate in Dubai, where there is normally a line out the door of people waiting to process visa applications.The State Department has said it does not plan to cancel previously scheduled visa appointments for residents of the six countries.Trump issued the ban in a March 6 executive order, saying it was a temporary measure needed to allow the administration to review the vetting process for immigrants from those countries. Travel from the six countries was banned for 90 days and for all refugees for 120 days.But lower courts in Maryland and Hawaii blocked the order, saying it was a pretext for targeting Muslims and violated the US Constitution's prohibition on favoring one religion over another. The Supreme Court then narrowed the scope of the lower court injunctions.REFUGEES IN LIMBORefugee advocates are struggling to understand what the court ruling will mean to applicants in the pipeline.The State Department on Tuesday said the United States has already admitted about 49,000 refugees for the fiscal year ending in September, while Trump's executive order set a cap of 50,000.The high court's decision allowed the cap take effect, but only against those who do not have a “bona fide” connection.Refugee resettlement agencies are poised to argue that their relationships with individual refugees, which entail coordination with the US government, sometimes over the course of years, meets the Supreme Court's standard.If the government accepts that view, it would likely mean that every refugee already cleared for resettlement would be eligible to enter the United States.A narrower approach limiting entry only to refugees with US family members would shut out some of the most vulnerable populations, said Eleanor Acer, from the organization Human Rights First.Many refugees being resettled in the United States already have US ties, but those that do not include children in need of urgent medical care and women who are victims of human trafficking, she said.The State Department has told refugee resettlement partners abroad that they should proceed with resettlement of refugees scheduled to travel to the United States through July 6.