Will PA municipal elections take place only in the West Bank?

The 2012 municipal elections, which Hamas boycotted, took place only in the West Bank. Voter turnout stood at 54 percent, much lower than the 75 percent in the 2006 parliamentary elections. 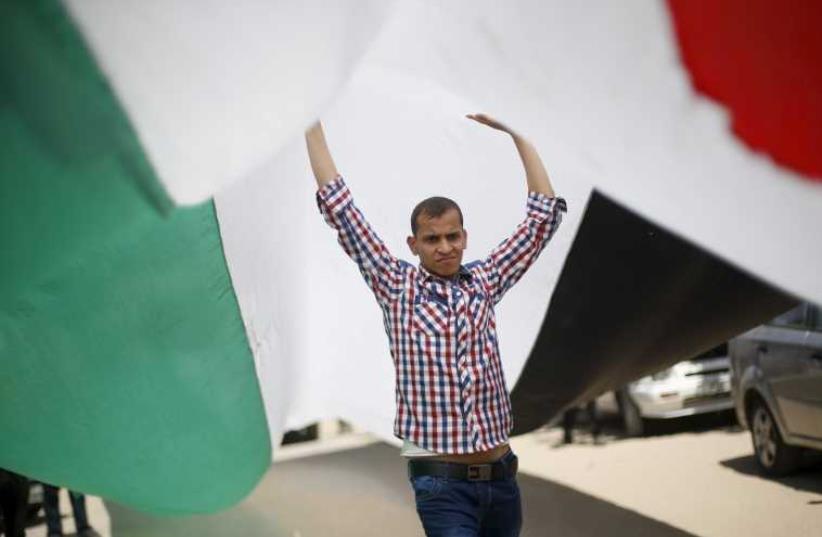 A demonstrator in Gaza City holds a Palestinian flag during a rally calling on rivals Hamas and Fatah to end their political division
(photo credit: REUTERS)
Advertisement
Some Fatah leaders suggested over the weekend that if the Palestinian Authority High Court of Justice cannot resolve its concerns regarding the local elections that were scheduled for October 8, they should still be held in the West Bank.Abbas Zaki, a member of the Fatah Central Committee, the movement’s most authoritative body, told The Jerusalem Post in a phone conversation that if the court cannot resolve the outstanding concerns regarding both Jerusalem and the Gazan courts, elections should still take place in the West Bank.“We hope that the occupation will disappear and the homeland will unify and that elections will take place everywhere, but in order to continue the democratic process, transparent elections should still take place in the West Bank,” he said.Zaki added that such an approach will not necessarily exclude Jerusalem and the Gaza Strip from the electoral process because “these elections could take place in stages.”The PA High Court ruled on Thursday to suspend Palestinian municipal elections amid ongoing disputes between Hamas and Fatah.The municipal elections, which had been scheduled to take place in the West Bank and Gaza, would have been the first time both Fatah and Hamas competed on the national level since the 2006 parliamentary elections.Fatah leaders have said they will respect the decision of the court, which is located in the Fatah-dominated West Bank; Hamas leaders have rejected it, saying it is “politicized.”In its ruling, the court said it suspended the PA government’s decision to hold elections because of the exclusion of Jerusalem from the electoral process and concerns about the legality of Hamas-operated Gazan courts.Israel informed the PA in July that it would not allow it to hold elections in Jerusalem. In addition, the PA does not recognize the legitimacy of Gazan courts, which Hamas has operated since taking over the coastal enclave in 2007.Just before Thursday’s High Court ruling, Gazan courts disqualified five Fatah lists from running in the elections.The PA High Court is expected to reconvene on September 21 to decide the future of the vote.Mahmoud al-Aloul, another Fatah Central Committee member, echoed Zaki’s comments on Palestine TV.He suggested that the electoral process should remain suspended in Gaza until a solution to its courts is found, but added that “elections must happen in the northern provinces (i.e. the West Bank) in order to avoid returning to point zero.”Jibril Rajoub, also a member of Fatah’s top body, told the Post that Fatah has not held discussions about holding the elections solely in the West Bank, but suggested that his movement may review such an option following the court's final ruling. “We are committed to the legal process and like any other democratic state cannot subvert it, but after the court makes its final decision, we will discuss all the possible scenarios,” he said.Khaled Elgindy, a senior fellow at the Brookings Institution in Washington, told the Post that holding elections exclusively in the West Bank would go against the grain of the PA High Court’s ruling, making it an unlikely scenario.“I think it would be hard to do that in light of the nature of the court’s ruling – what they said is that there are problems with courts in Gaza and we can’t hold elections in Jerusalem – so it would be very odd for them to go ahead and hold elections just in the West Bank when the whole point of the court’s ruling was to say we can’t have partial elections,” Elgindy, who also previously served as an adviser to the Palestinian leadership, said.Elgindy added that the election process will likely remain on hold until Hamas and Fatah make progress in terms of reconciliation.“Where we are now is a continuation of this stalemate between Hamas and Fatah, and until that is resolved, we are not likely to see municipal elections,” he said.The 2012 municipal elections, which Hamas boycotted, took place only in the West Bank. Voter turnout stood at 54 percent, much lower than the 75 percent in the 2006 parliamentary elections, which Hamas won.