Ya’alon: Arab states are seeking out nukes in wake of Iran deal

“We periodically hear about certain states in the region considering, and also signing deals with states that can supply them with what they need,” security expert Dr. Emily Landau said. 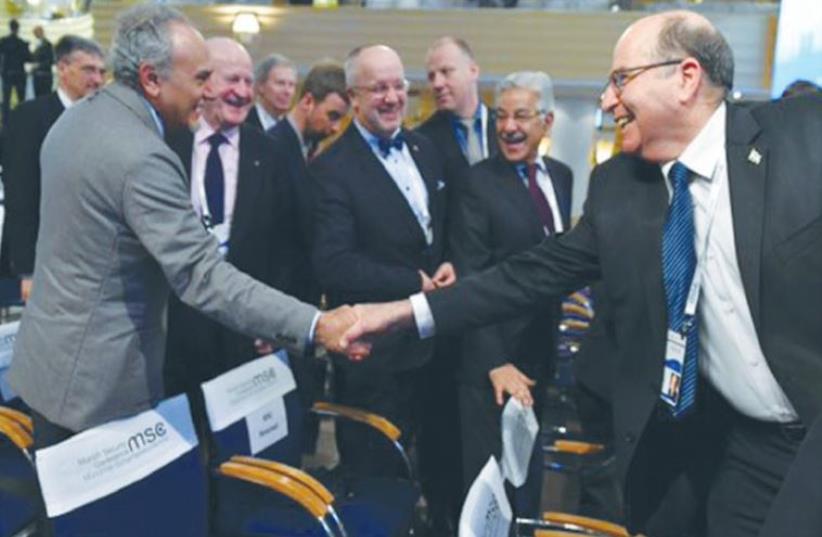 DEFENSE MINISTER Moshe Ya’alon (right) reaches out to Saudi Arabia’s Prince Turki al-Faisal in Munich yesterday.
(photo credit: TWITTER)
Advertisement
Israel is “seeing signs that states in the Arab world are preparing to get nuclear weapons, because they are unwilling to sit quietly with a nuclear Iran, or an Iran on the verge of a nuclear bomb,” Defense Minister Moshe Ya’alon told fellow defense ministers at the Munich security conference on Saturday.Israel is closely monitoring the enforcement of the nuclear deal reached between world powers and the Islamic Republic, Ya’alon said, warning that even if Tehran keeps to the agreement, “15 years [when it expires] is around the corner.”Asked to comment on Ya’alon’s warning, Dr. Emily Landau, who heads the Arms Control Program at the Institute for National Security Studies in Tel Aviv, said some Arab states will have more motivation to go down the nuclear path, following the deal reached with Iran.“I believe that the motivation in some states to go down the nuclear path has increased” she told The Jerusalem Post on Sunday.Landau added: This “doesn’t mean they will all become nuclear states, but I believe it means they want to be better positioned in the nuclear field. The three states that are often mentioned as those who would have the strongest motivation to become nuclear states if Iran were to cross the threshold are Saudi Arabia, Egypt and Turkey, because of the implications of Iran going nuclear for regional leadership and hegemony. Saudi Arabia has made some strong statements about its intent to have whatever capabilities Iran does.”Arab states are showing an interest in developing civilian nuclear programs, which they are entitled to do as parties to the Nonproliferation Treaty. This would set them up for military programs should they decide to develop nuclear weapons capabilities in the future, Landau said.“The first step is to set up a nuclear infrastructure that is civilian in nature. All of the proliferators have gone this route – developing a military capability under the guise of a civilian one, and all under the cover of the NPT,” she noted.“The interest in a number of states in the Middle East became apparent about 10 years ago when half a dozen states across the region submitted requests to the IAEA. It was at a time when it seemed that the international powers might not be able to stop Iran, and the interest in setting up these programs has continued since then.“We periodically hear about certain states in the region considering, and also signing deals with states that can supply them with what they need,” Landau said.