The harrowing story is the most shocking case of a former survivor of the ISIS genocide in Iraq, that led to the ethnic cleansing of more than 400,000 Yazidis. 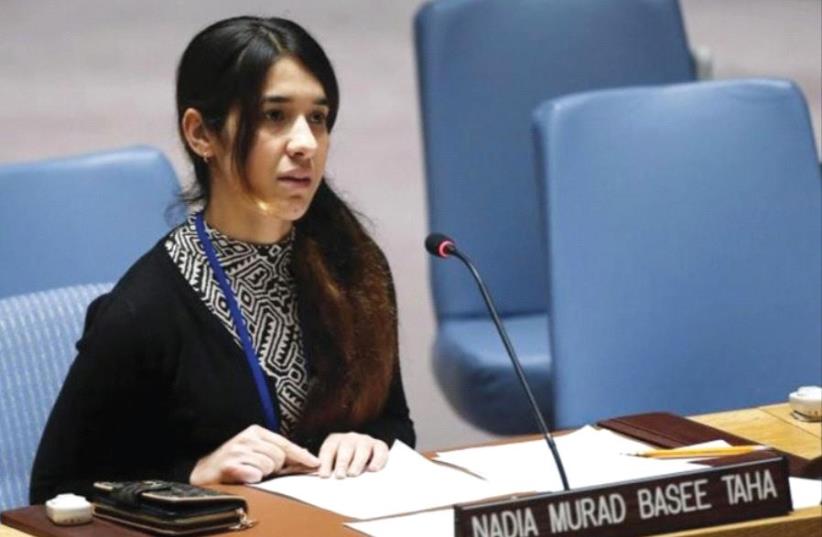 Yazidi human rights activist Nadia Murad speaks to members of the UN Security Council
(photo credit: REUTERS)
Advertisement
“I said to myself that he’s an ISIS man and no way he could come to Germany,” Ashwaq Haji, told the Kurdish media company Rudaw over the weekend. The Yazidi woman was 14 years old when ISIS attacked her village in August 2014 and sold her and her family into slavery. She managed to escape to Germany in 2015 and was seeking to complete her studies there when one of her abusers showed up near Stuttgart and began stalking her. She has now fled back to northern Iraq, while the former ISIS member lives freely in Germany.The harrowing story from a survivor of the ISIS genocide in Iraq that led to the ethnic cleansing of more than 400,000 Yazidis and the systematic murder of thousands, serves to confront the unwillingness of Germany to prosecute its perpetrators. “I ran away from Iraq so I would not see that ugly face and forget anything that reminds me of it,” she said in a recent interview. “But I was shocked to see him in Germany.” Ashwaq says that ISIS kidnapped 77 members of her family in 2014. She was taken to Syria and then back to Iraq where girls over the age of six were separated from their families and sold. Four weeks later she was sold again, this time to a man she called Abu Humam in the city of Baaj in Iraq. Abu Humam’s family was from Baghdad but many of his relatives lived in Germany.Ashwaq was able to go to Germany under a special program along with other women and girls who were victims of ISIS. Germany was supposed to be a place of safety and refuge in which to heal from the trauma of genocide and abuse. But she says that many Yazidi girls reported seeing former ISIS members in Germany.Then it happened to Ashwaq as well. She says that she first saw the ISIS member following her home in 2016. “I couldn’t believe it was him,” she says. She told her mother, who tried to console her by saying it wasn’t possible that an ISIS member who once purchased Ashwaq for $100 could possibly have come to Germany. In February 2018, it happened again. A man in a white car pulled up close to Ashwaq and said he knew her name and where she lived. “He knew everything about my life in Germany.”She then went to the police. Authorities confirmed to broadcaster Deutsche Welle that a complaint was made. Police in Baden-Wurttemberg launched an investigation but claimed they didn’t have enough information to prosecute. “The young woman was interviewed but the information wasn’t precise enough,” a spokeswoman for the federal prosecutors said on Saturday. By the time the media had learned of Ashwaq’s ordeal, in August, she had already fled back to Iraq. “If I had not seen him, I would have stayed in Germany. I wanted to complete my studies and get a degree that would have given me a decent life,” she told reporters.Ashwaq now says she spoke up because many victims are silent and do not go to the authorities in Germany to report that ISIS members are present. “I’m making this much noise because there are hundreds of Yazidi girls in Stuttgart. So are many ISIS men, but no one hears the voice of those girls or does anything for them,” she told Rudaw.For Ashwaq, the continuing trauma is not just about her, but also about the ability of ISIS to continue its existence in Europe and elsewhere. She says 41 members of her family are still missing and haven’t been heard from in four years. They are among an estimated 3,600 Yazidi women still missing. “I am not talking about just one man, but there are thousands of them [ISIS] in Europe and Stuttgart. They must kick out those ISIS,” she said. “I want all the ISIS men out of Germany, otherwise many other Yazidi girls will leave and those ISIS men will destroy Germany.”Women victims of ISIS are presented with a difficult road to justice in Germany. Police in Baden-Wurrtemberg and the federal prosecutors indicated that victims like Ashwaq would have to return to Germany in order to provide further information. But the police have reportedly not provided any special protection for the victims.“ISIS continues to commit gross systemic abuses of human rights and violations of international law like kidnappings and the persecution of individuals and communities on the basis of their identity,” US Ambassador to Germany Richard Grenell told The Jerusalem Post. “The 77 countries in the Global Coalition to Defeat ISIS, including the United States and Germany, are committed to stopping these acts of violence and intimidation,” he said. More than 1,000 Germans were estimated to have joined ISIS, according to Reuters, and Germany’s domestic intelligence service has warned about the threat of “sleeper agents.” Polla Garmiany, a policy analyst, suggests that one way to help prevent ISIS members from infiltrating or returning to Germany is to strengthen outer EU borders and work closely with affected communities. “Germany and the EU in general need to support Greece and Italy to help strengthen their police and immigration authorities,” he says. “That could help telling apart extremists disguised as refugees.” However, he adds, it’s important not to feed anti-immigrant views of right-wing extremists, but rather to emphasize that people like Ashwaq are refugees who need protection.The presence of former ISIS members in Baden-Wuerttemberg is not the first time in recent years that people who are wanted for crimes against humanity have turned up in Germany. In 2013, authorities in the same state took into custody a former Nazi guard who had served at Auschwitz. Nadia Murad, a Yazidi survivor of ISIS crimes, visited the Holocaust Museum in Washington in July and said the scenes “looked similar to what Yazidis witnessed in 2014.” As with the failure to prosecute Nazi criminals, many ISIS perpetrators continue to walk free, say survivors.