1 killed, many hurt in collapse at Mt. Herzl stage

By MELANIE LIDMAN, LAHAV HARKOV
APRIL 18, 2012 18:54
Lighting rig falls at Har Herzl 370
(photo credit: Marc Israel Sellem)
Advertisement
Tragedy marred a rehearsal for the annual celebration of Independence Day when a 10-meter-tall steel light rigging system collapsed on Wednesday afternoon at Mount Herzl in Jerusalem, killing one woman and injuring four others.The soldiers from the Color Guard who were rehearsing for next week’s ceremony were trapped underneath the large lighting truss when it fell shortly after 3 p.m. Hila Bezaleli, 20, was killed and another soldier was critically injured. The other victims were injured lightly and treated at Shaare Zedek Medical Center and Hadassah University Medical Center in Ein Kerem.Witnesses said the steel structure was wavering dangerously in the wind, and someone called out “It’s going to fall!” before the entire structure crashed to the ground. One teenage Jerusalem resident, who was watching his cousin at the rehearsal, said he saw Bezaleli lying on the ground after the columns collapsed.“People were panicking, everyone ran to try to pick her up,” said the teenager, who cannot be named because he is a minor.Jerusalem District Police Dep.-Cmdr. Manny Yitzhaki said police were investigating every angle of the incident.“We will investigate the facts one by one to understand how this happened and who is responsible,” he said.Yitzhaki added that police were checking how the structure was built and had detained a number of engineers involved in its construction for questioning.Knesset Speaker Reuven Rivlin sent his condolences in the name of the entire legislature to the family of the soldier killed, and wished the injured a speedy recovery.“The heavy tragedy will certainly have an influence, but with all the sadness and pain, the Independence Day ceremony must go on,” Rivlin said after discussing the issue with Jerusalem Mayor Nir Barkat and Public Diplomacy and Diaspora Affairs Minister Yuli Edelstein, whose ministry is in charge of the ceremony.Rivlin called for the preparations to continue at the same time as the investigation.Meanwhile, MK Michael Ben-Ari (National Union) said there should be a commission of inquiry on the “grandiosity of the Independence Day ceremony, which outdoes itself every year.”Police are canvassing the rest of the structures at the ceremony site, including bleachers intended to seat hundreds of people, to determine if they are safe.Yesterday afternoon, four mobile intensive care units and 15 ambulances were dispatched to the scene. Jerusalem Fire and Rescue spokesman Asaf Abras said firefighters only understood the severity of the situation when they arrived at Mount Herzl. 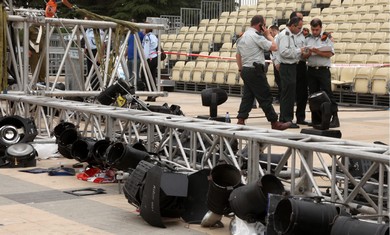 “I find it devastating,” he said as he looked out at the mangled steel. Glass covered the ground from smashed lights, and spots of blood were still visible.Abras said the lighting structure had received approval from the fire department, which deemed it safe in terms of fire risk. Abras explained that as a general rule, the fire department does not allow similar lighting fixtures if wind is blowing at more than 30 knots (about 55 kph).On Wednesday, the wind was blowing in Jerusalem around 16 knots (30 kph). But after 3 p.m., there were gusts of more than 37 knots (70 kph), according to Nir Stav, Israel Meteorological Service deputy director.Authorities are also investigating whether or not negligence contributed to the collapse.Bezaleli’s funeral took place on Wednesday evening at Mount Herzl. 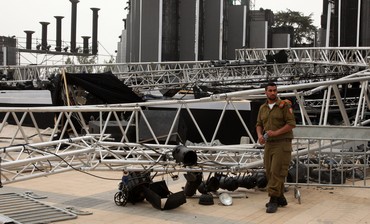