By BEN HARTMAN
FEBRUARY 23, 2012 15:26
Acre shark 390
(photo credit: www.sonara.net)
Advertisement
Parks and Nature Authority says Israel in the midst of its “shark season,” when higher numbers of sharks seek out warm water near power plants.Two Acre fishermen were in for a surprise on Thursday morning when they found a 3- meter blue shark thrashing in their net.Unable to free the shark from his net, Ashraf Suway towed it to dock at the Acre marina, where it quickly became a tourist attraction. 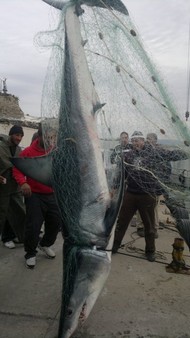 Half-ton shark caught in Acre (www.sonara.net)Writer and photographer Refat Akar from the website Sonnara.net published a series of photos on Thursday that showed passersby and children posing on the monster fish, and said that Suway told him that no fisherman had caught a shark that size in the area of the Acre marina in 50 years.Ayal Miller of the Parks and Nature Authority went to the Acre dock to pick up the shark on Thursday morning, and expressed a somewhat more reserved reaction.“There are a lot of sharks like this, just people don’t catch very many of them. This is not some sort of revolution though,” he noted.Miller said the shark’s head and tail were removed and sent to researchers at Tel Aviv University.Omri Gal, a spokesman for the Parks and Nature Authority said Israel is currently in the midst of its shark season, during which larger than usual numbers of shark come closer to the country’s shores in areas like Hadera and Ashkelon, where power plants are near the sea. 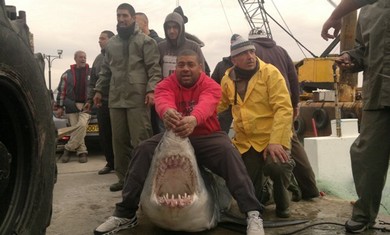 Half-ton shark caught in Acre (www.sonara.net)
Gal said the sharks seek out those areas so that they can hunt the fish that swim in the warm waters that stream into the sea from the power plants.He added that, during the season, the authority supervises the areas around seaside power plants in order to prevent illegal shark-fishing, much of which he said is taken and sold in markets in the Gaza Strip.According to a 2007 report by the IUCN Center for Mediterranean Cooperation, 30 of the 71 shark species (42 percent) in the Mediterranean are threatened, and 18% are critically endangered.