African asylum seekers launch another march out of detention facility 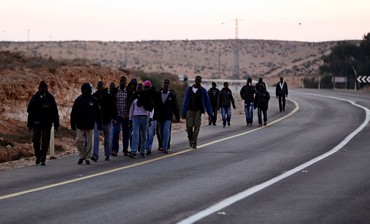 African migrants march to Jerusalem from Negev detention center, Dec. 16, 2013 Photo: REUTERSA total of 130 Sudanese and Eritrean migrants began another march out of the Holot open detention facility in the South on Thursday, two days after a group of around 200 were arrested in Jerusalem after a protest outside the Knesset.Those 200 were among a group of well over 350 detainees who left the open facility over the weekend and refused to return. They made their way to Jerusalem by foot and by bus, and protested in front of the Knesset demanding that Israel recognize their asylum claims.
Video by Benji RosenThey were arrested, and many of them were moved to the Saharonim closed facility.On Thursday, the detainees who were marching were stopped and questioned and in some cases detained by immigration officials as well as police as they made their way to Beersheba. According to the anti-infiltration amendment, the state must wait 48 hours to arrest someone who hasn’t returned to the facility. However, the stipulation is not in effect for people who have failed to return from a furlough in the past.So, on Thursday, officials were able to stop and check the marchers to determine who they could arrest without the waiting period.The Population, Immigration and Border Authority said on Thursday that it wasn’t clear who the 130 marchers were, if they were people who had left and not returned previously and had already been arrested, or if they were people who can not be detained until 48 hours has passed. The authority said that it had stopped a large number of them and it is trying to determine who is who.As of Wednesday night, there were 278 detainees in the open facility. After the second march only 148 remained, far less than the 483 that were moved into Holot after it opened last Thursday.
Advertisement
Subscribe for our daily newsletter