Aharonovitch: Price tag suspects are terrorists, use administrative detention against them

After rash of price tag attacks, Livni holds emergency meeting on how to stop phenomenon; says anti-IDF rhetoric from Yitzhar reminiscent of Hamas. 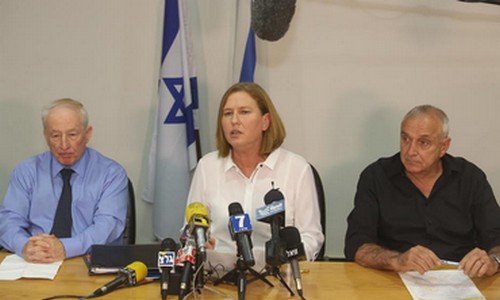 Prime Minister Binyamin Netanyahu must ask the cabinet to classify “price-tag” attackers as terrorists, two top ministers said Wednesday in the aftermath of a rash of hate crimes against Palestinians and Israeli Arabs.“We know who carried out these acts and they must be declared terror organizations, and we must be allowed to use administrative detention against them,” Public Security Minister Yitzhak Aharonovitch (Likud Beytenu) told reporters on Wednesday.According to Justice Minister Tzipi Livni (Hatnua), “price-tag” attacks harm Israel internally and abroad.“The best public relations in the world cannot explain why these acts are occurring in a nation that seeks peace,” Livni said. “We must leave no stone unturned to ensure that those who engage in these acts are brought to justice.”She was speaking at the start of an emergency meeting at her ministry in Jerusalem on Wednesday with Aharonovitch, Attorney-General Yehuda Weinstein and law enforcement representatives.Just that morning it was discovered that vandals had scrawled the words “Death to the Arabs” on the office door of a Druse dentist in the northern town of Yokne’am.Last month the front window of the office was shattered and a Star of David was sprayed on an interior wall.Later on Wednesday, police in Yokne’am arrested a 25-year-old man as he punctured the tires of a car parked at a construction site known to hire Israeli Arabs. Police are now looking to see if he was involved in previous “pricetag” attacks in the city.Separately, the Hebrew daily Yediot Aharonot on Wednesday reported that a number of residents from the West Bank settlement of Yitzhar had appeared to justify violence against security forces, including the killing of a soldier, on an Internet chat forum in early April.A 22-year-old woman – who was detained on Wednesday and then freed to house arrest – wrote: “I am in favor of throwing stones, even if it would cause the death of a soldier.”  (Video: Tovah Lazaroff)Not technically a hate crime, violence against security forces by Israelis has often been linked to the “price-tag” phenomenon.Speaking at the Justice Ministry prior to Wednesday’s emergency meeting, Livni blamed Israeli violence against Israeli security forces on the failure by law enforcement figures to halt hate crimes.“These words [that appeared on the Internet chat forum] were not said in Hamas headquarters, but in a Jewish settlement – in Yitzhar,” she stated.“Those who were silent in the face of hate crimes against Arabs have now discovered that these same crimes have been directed against IDF soldiers, against law enforcement authorities and against the rule of law,” she continued.“We have learned that these kinds of text can be transformed into action.”Back in December, Aharonovitch asked the government to make available additional legal tools to fight the phenomenon of “price-tag” attacks.Some were granted, such as the creation of an anti-nationalist crime unit.But he has said that law enforcement would be more effective if the crimes themselves were reclassified as acts of terror and he could use a limited form of administrative detention in which suspects are held to prevent the execution of a crime. This would be similar to the administrative detention used for Palestinian security suspects who are held without charge or the right to see the evidence against them. Aharonovitch has in the past also called for the use of such arrests against organized crime figures.Aharonovitch said it would also be helpful to increase the use of restraining orders, by which suspects are ordered to stay away from an area of the West Bank for a limited time to prevent a crime from occurring.Livni said she questioned the wisdom of that tool because she believed it allowed suspects to execute the same crime in a different part of the country.At the end of the meeting, she and Aharonovitch asked Netanyahu to convene a cabinet meeting on the issue.In June, at their request, the prime minister held a security cabinet meeting on the matter but refused to support the reclassification of “price-tag” attacks as acts of terror even though he had condemned hate crimes.Instead, the security cabinet moved to define “price-tag” perpetrators as undertaking an “illegal association,” a move that gave law enforcement additional tools, including stiffer sentencing options.Aharonovitch’s spokesman said he believed Netanyahu would end up holding a cabinet debate on the matter.The Prime Minister’s Office, however, would not say if such a debate would be held.Construction and Housing Minister Uri Ariel (Bayit Yehudi), who was not at the meeting, said he had harshly condemned “price-tag” attacks and supported increasing the legal tools to combat them. Nevertheless, he warned that it would be a mistake to confuse such activity with acts such as suicide bombings.Meanwhile, the Jerusalem Magistrate’s Court on Wednesday delayed a hearing for a Yitzhar resident arrested last Thursday along with his wife on suspicion of having taken part in the attempted torching of a mosque in Umm el-Fahm last month. The wife was released, but the husband remained in custody because police said the couple’s car had been spotted at the scene of the crime.Two days after the arrest, police carried out a raid of the couple’s home in Yitzhar with a search warrant and said they were attacked by local residents.Also on Wednesday, police arrested a 28-year-old man suspected of taking part in the vandalism of an IDF post next to Yitzhar in April following the demolition of structures nearby. The suspect was brought to court in Jerusalem, where he was released and ordered to pay NIS 3,000 and stay out of Yitzhar for the next 10 days.In another suspected hate crime, discovered on Wednesday, a swastika and a caricature of a Jewish man were discovered spray-painted on a wall at a cemetery at Sha’ar Menashe.