Analysis: The legal battle of the titans

Attorney-General Yehuda Weinstein (L) and FM Avigdor Liberman370
(photo credit: REUTERS)
Advertisement
It was a political-legal drama that shook the country to its foundations.Attorney-General Yehuda Weinstein, the experienced head of the legal system, versus Foreign Minister Avigdor Liberman, the powerful leader of the Yisrael Beytenu political party.Weinstein would probably be the first to point out that Liberman’s legal problems started not with him, but with his predecessor, Menahem Mazuz (though aspects of the nearly 17 years of investigations against Liberman, with no convictions, predated even Mazuz and related to different matters).But the fateful decisions – to close the “big case” against Liberman, alleging a multi-million dollar money-laundering scheme from 2001 to 2008, and to indict him in the “small” Belarusan Ambassador Affair case, leading to his stepping down as foreign minister for a full year from December 2012, were made by Weinstein.The affair involved criminal allegations against Liberman after then-ambassador to Belarus Ze’ev Ben-Aryeh abused his position to illegally give Liberman an envelope with classified information relating to the big case investigation against him.What were Weinstein’s inner thoughts that led to these climactic decisions that will leave the two titans inexorably linked in the nation’s memory? How does Weinstein relate to criticism from all sides of the decisions as showing weakness in letting Liberman “off easy” in the big case and, in the small case, being part of what Liberman (who denied all charges) has called a 17-year crusade to derail him with bogus criminal charges? (which ended in no convictions and a resounding acquittal from the Jerusalem Magistrate’s Court.) First, the big case. Sources close to Weinstein say he was firm and unapologetic about closing it.They say he genuinely believed there was no chance at a conviction.You get the impression from Weinstein that he believes strongly in the phrase that it takes more courage and is harder to close a case than to file an indictment.It would appear that Weinstein would argue that those accusing him of weakness do not understand that if you objectively arrive at the conclusion that you expect an average judge to acquit, your professional obligation, with no room for discretion, is simple – you close the case.In his 95-page opinion closing the big case, Weinstein discussed the difficulties of the litigation and described tremendous efforts and resources invested by the prosecution, working with over half-a-dozen former USSR countries.But in defending closing the case, he would likely ask rhetorically, that after years of these efforts, what would have been the point to five more years of litigation in an extended complex trial that would have, in his opinion, inevitably led to acquittal at the end.How would Weinstein respond to the very public and strident Avia Aleph, head of the economic crimes prosecution unit, when the big Liberman decisions were made, who in several media interviews personally slammed Weinstein for closing the big case? The attorney-general believed that when the decision- makers met in real-time, Aleph would not even be willing to give an answer as to her opinion on the case.Then-State Attorney Moshe Lador’s view was that Weinstein’s decision to close the big case was “not unreasonable,” but that he still would have pursued the case.Despite this decision, those close to Weinstein say he considered Lador very hesitant in his views about the case all along, and that he just barely came out at the end in favor of filing the case.Regarding indicting Liberman for the Belarus Ambassador Affair, from Weinstein’s perspective, judging whether he and prosecutors ultimately made the correct decision should not depend on the final verdict (in which Liberman was acquitted).Weinstein saw the Belarusan Ambassador Affair case as very simple. Everyone agreed on the basic facts. Ben-Aryeh himself was convicted of abusing his position to illegally give Liberman an envelope with classified information relating to the big case investigation against him.The main legal question was whether Liberman committed fraud and breach of public trust by failing to report Ben- Aryeh’s illegal disclosure to authorities on multiple occasions.From Weinstein’s perspective, to the extent he ever had any doubt about filing this indictment, it was only to confirm that all of the above facts were airtight.Once he was convinced that all of those facts were undisputed, Weinstein thought there was no doubt, from a legal perspective, that Liberman’s actions were not merely unethical, but criminal.It would appear that Weinstein was less focused on the case’s second issue: whether to believe deputy foreign minister Danny Ayalon that Liberman had helped Ben-Aryeh get a later ambassadorial appointment (to Latvia) in exchange for his loyalty (which the court discounted more categorically than the first charge).Those close to him said he could not call the actions of a minister who acted as Liberman did kosher (Liberman testified that he did not report Ben-Aryeh so as not to ruin the decades-long career of a talented diplomat for a momentary lapse). 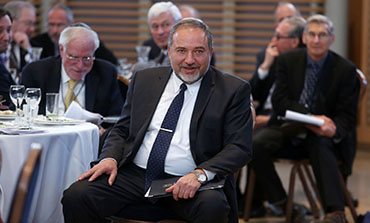 Weinstein would emphasize that all that happened in the acquittal verdict was that three judges had doubts about whether Liberman knew the significance of what he had seen and whether he knew the envelope was part of an Israeli investigation or could have been from a Belarusan investigation against him.He would certainly add that the verdict was a complete mistake and that it took liberal interpretations of the spectrum of possibilities of what a person’s mental state could be during a suspicious act too far in concluding that at most what was proved was that Liberman’s actions were unethical (Liberman has said he would act identically if he could go back in time, and he was at peace with his actions).You get the impression from Weinstein that he believes commonsense dictated a verdict of guilty, and that he did not know why the judges had departed from anything he viewed as resembling common sense.Those close to him would reject several points of specific criticism from the judges and some observers about the prosecution’s missing evidentiary points.In acquitting Liberman, the court said that the plea-bargain narrative that Ben-Aryeh signed could have included more specific allegations to use against Liberman.After incriminating Liberman to police, Ben-Aryeh turned “hostile” to the prosecution in court testimony, endorsing Liberman’s narrative of innocence, which the court attributed to a loose plea-bargain narrative.Further, the court said that other witnesses like Deputy Interior Minister Faina Kirschenbaum (Yisrael Beytenu) and the government agent who performed Ben- Aryeh’s polygraph test (when he first incriminated himself and Liberman) should have been called by the state.Weinstein would say these were not serious issues and could not explain the court’s liberal stance on Liberman’s mental state.Though they were on different sides in this battle of titans, one thing that Liberman and Weinstein do have in common is the firm resolve they project that each believes what he did was right.This is the second part in a series on the attorney-general.