Anti-racism activists call on PM, gov't to 'wake up'

By RUTH EGLASH
JANUARY 18, 2012 20:11
Ethiopian protests at Knesset 311
(photo credit: Marc Israel Sellem)
Advertisement
Calling on the government to wake up and take a serious stand against racism, thousands of people marched through the streets of Jerusalem Wednesday to protest what they believe is ongoing and institutionalized discrimination against Israelis of Ethiopian descent.In contrast to previous anti-racism demonstrations, including one that took place last week in Kiryat Malachi, members of Israel’s Ethiopian community were joined by a wide range of people from all sectors of society, as well as a large number of politicians and members of NGOs.“Our goal is to raise awareness and send the message to the government of Israel to wake up and take notice that there are black Jews in Israel and that it is also our country,” Gadi Yevarkan, director of the Center for Social Equality for the Ethiopian Jews, and one of the protest’s organizers, told The Jerusalem Post.Yevarkan said he hoped to ensure that mistakes made in the 1980s and 1990s in absorbing thousands of new immigrants from Ethiopia would not continue.Many of the community’s young leaders, including Yevarkan, believe a problematic and discriminatory absorption process has led to the creation of Ethiopian “ghettos,” segregation in the education system, and racist attitudes toward Ethiopian immigrants among mainstream Israeli society.RELATED:
Ethiopian activists furious over Landver commentsWhile Wednesday’s demonstration, which started outside the Knesset and made its way to the Prime Minister’s Residence, was sparked by a television news report that several residents of Kiryat Malachi had signed an agreement not to sell or rent their apartments to families of Ethiopian descent, Yevarkan said the reason for the protest was much deeper.“We are protesting because we are Jews and we remember that the last time we were not allowed to rent apartments was when we lived in Ethiopia,” he said, adding that those who turned out to protest had come “because they are Israelis and Jews, they are patriotic and want Israel to be a good place to live.” 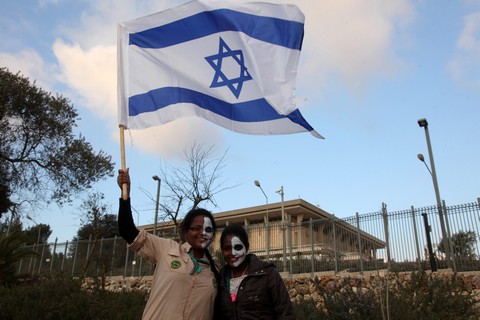 Ethiopians protest racism with Israeli flagYevarkan also pointed out that he, along with many other young Ethiopian- Israelis, are often used as a PR or marketing voice to prove that Israel is not a racist country. He said it was time to make sure that this is truly the case.“We want to share the message that as Jews, we have all suffered because of our religion and there is no reason for us not to feel at home in Israel,” he said.While last week’s protest in Kiryat Malachi was attended mainly by members of the Ethiopian community, Wednesday’s march drew support from a wide range of populations in Israel.In attendance were several Knesset members. Most prominent was opposition leader and Kadima party chairwoman Tzipi Livni, who had to be escorted from the protest by bodyguards after the crowd turned hostile. Other MKs who joined the protest included Ethiopian-born Shlomo Molla (Kadima), Ilan Gilon (Meretz) and Daniel Ben-Simon (Labor).Also making an appearance was the woman who sparked last summer’s mass social justice protests, Daphni Leef. 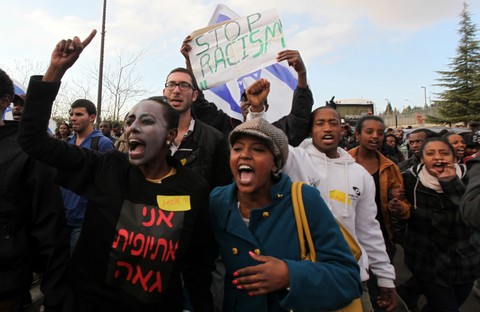 Ethiopians protest racism at Knesset“I believe this is an evolution of what happened in July,” Leef told the Post. “Even though 7 percent of the population came out onto the streets calling for social justice, the government has shown complete disregard for social issues, and now we are even seeing a series of anti-democratic laws. This is no longer a fight for welfare or education or equal pay, but a fight for democracy that has created a civil rights movement.”While Leef admitted there had been little contact between leaders of the summer’s so-called “tent protests” and members of the Ethiopian community, she said that due to recent activities that was likely to change. Successive governments in Israel have “nurtured a divide-and-conquer method” that has prevented different social groups from uniting and fighting together, she said.Wednesday’s protest brought together not only white people and black people – also making an appearance were people with disabilities.Tzippi Arbeli, a wheelchair- bound activist, said it was time for all of Israel’s minorities – people with disabilities, Ethiopians, Arabs – to unite.“Just because I have a disability does not mean I should only be fighting for the rights of people with disabilities,” Arbeli said. “It is all connected and we must all unite and fight for social justice together.”
Advertisement
Subscribe for our daily newsletter