‘We have 2 major leads we are working on and should have answers soon,’ says Jerusalem Fire Department spokesman. 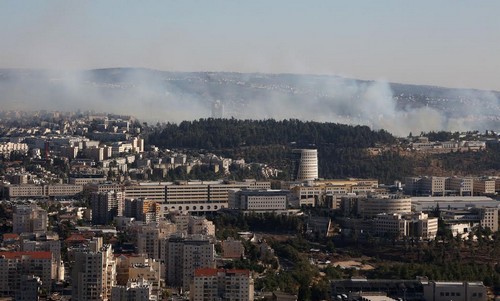 MARC ISRAEL SELLEM After firefighters and rescue workers finished extinguishing the remains of a massive inferno in the Jerusalem Forest Thursday that resulted in the destruction of five homes, the evacuation of two neighborhoods and Yad Vashem on Wednesday, police said it had developed two strong leads in the case.“We presently have two promising lines of investigation,” Israel Police spokesman Micky Rosenfeld said. “The first involves a group of children seen in the area whom we suspect may have been playing with matches and accidentally started the fire, and the other is arson.”Citing an instance of arson in Abu Ghosh two weeks ago, Rosenfeld said police utilized forensic experts at the site of the fire in the Jerusalem Forest to help in the search for suspects.“We are working around the clock and hope to determine who was responsible for this soon,” he said.The near-150 acre blaze raged out of control for much of Wednesday afternoon and early evening, spreading perilously close to the bucolic Ein Kerem and Kiryat Hayovel neighborhoods.It took dozens of firefighting units from across the country, six airplanes, two helicopters and hundreds of police officers to contain Wednesday’s blaze, which forced the evacuation of more than 200 homes.The fire also cut off road access to Hadassah University Medical Center in Ein Kerem for much of the day, resulting in a near medical crisis.Despite the power and breadth of the blaze, there were only three minor injuries reported due to smoke inhalation, fire officials said.“We are grateful that there were no serious injuries,” a Jerusalem Fire and Rescue Service spokesman said.
Advertisement
Subscribe for our daily newsletter